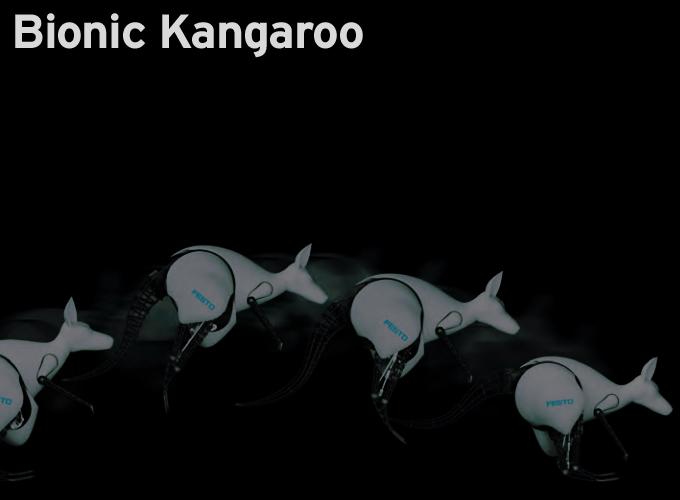 Recovering, storing and releasing energy based on a natural model

On Australia’s coat of arms it stands for progress, whilst the special way it moves is unique in the animal world: the kangaroo. With the help of its unusually long back legs, the marsupial is able to move quickly and efficiently over terrain.

Its jumping mechanism enables the kangaroo to increase its speed without using more energy in doing so. With every bounce it can store energy from the landing phase and use it again for the next jump. The Achilles tendon assumes an important function here, which is why it is particularly pronounced on the natural kangaroo.

New prospects due to bionics

A development team from Festo’s Bionic Learning Network spent two years recreating the jumping behaviour of the natural kangaroo as closely as possible and learning from it.

As an innovation leader for automation technology, Festo is always on the lookout for new or not yet widespread movement patterns and drive concepts. One source for new knowledge and future technologies here is nature.

Like its natural model, the BionicKangaroo can recover, store and retrieve the energy efficiently on the next jump. The technical implementation requires both sophisticated control technology and stable jump kinematics.

The consistent lightweight construction and the intelligent combination of pneumatic and electric drives enable the unique jumping behaviour. The system is controlled by gestures.

Mobile energy supply on board

Festo paid particular attention to the mobile energy supply on the artificial kangaroo and even developed two different concepts for this purpose. Either a small compressor or a high-pressure storage device can be placed inside the body. Both supply the compressed air necessary when jumping, which is dosed out exactly by two Festo MHE2 solenoid valves. Lithium polymer rechargeable batteries act as electrical energy storage devices. They supply both the valves and the electric drives, as well as the integrated Festo CECC control system, with the necessary power. 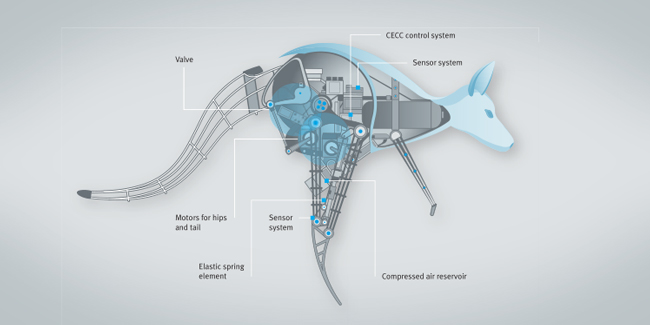 The BionicKangaroo can be controlled by gestures using a special armband. The armband detects the operator’s muscular movements. A position sensor in the armband records the movement of the arm. The armband sends these signals via Bluetooth to the artificial kangaroo’s compact control system, upon which it starts to interact with its operator.

When standing, the kangaroo touches the floor with both feet and its tail, thus giving it a stable three-point contact. Its tail also provides the necessary balance when jumping. An electric servomotor specifically controls its angle of attack and ensures the corresponding compensatory movement. The kangaroo thereby compensates for the countermovement of its legs, which have to be brought forward for the landing phase. The legs are also controlled by two electric servomotors, which sit between the hip and thigh, so that these can be moved forward and backwards. All the control signals here are generated by the compact control system.

A Festo DSNUP 20 pneumatic lightweight cylinder is attached along each lower leg, which actuates the leg. The knee and ankle joint are connected via a so-called positive kinematic device, resulting in an interlinked movement sequence.

The function of the natural Achilles tendon is adopted by an elastic spring element made of rubber. It is fastened at the back of the foot and parallel to the pneumatic cylinder on the knee joint. The artificial tendon cushions the jump, simultaneously absorbs the kinetic energy and releases it for the next jump.

The condition monitoring as well as the precise control technology ensure the required stability when jumping and landing. The energy status of the kangaroo, the manipulated variables and angle of attack are constantly monitored and evaluated. At the same time, the control system processes multiple sensor values. They go into complex control algorithms, which result in the manipulated variables for triggering the cylinders and motors.

In order to move as little mass as possible, all the components are optimally laid out, networked and controlled in the smallest possible space. The housing elements are cut out of foam. The kinematic system is made out of laser-sintered parts reinforced with carbon. As a result, the artificial animal weighs just seven kilograms with a height of around one metre, and it can jump up to 40 centimetres high and up to a distance of 80 centimetres.

The take-off and flight phase

Before the first jump, the elastic tendon is pneumatically pretensioned. The BionicKangaroo shifts its centre of gravity forwards and starts to tilt. As soon as a defined angle is reached at a corresponding angular velocity, the pneumatic cylinders are activated, the energy from the tendon is released and the kangaroo takes off.

In order to jump as far as possible, the kangaroo pulls its legs forward during the flight phase. This creates torque at the hip, for which the artificial animal compensates with a movement of its tail. The top of the body thereby stays almost horizontal.

The landing phase: energy for the next jump

Upon landing, the tendon is tensioned again, thus converting the kinetic energy of the previous jump to potential energy. The energy is thereby stored in the system and can be called on for the second jump. The landing phase is the critical process for recovering the energy and is responsible for the kangaroo’s efficient jumping behaviour. During this phase the tail moves towards the ground and thus back to its starting position.

If the kangaroo continues jumping, it channels the stored energy directly into the next jump. The potential energy from the elastic tendon is used again at this point. The valves switch at the right moment and the next jump begins. In this way it takes several jumps one after the other.

If the BionicKangaroo is supposed to come to a standstill, it must absorb as much energy as possible. To do so, the pneumatic actuators are switched accordingly and the tendon is actively tensioned again. 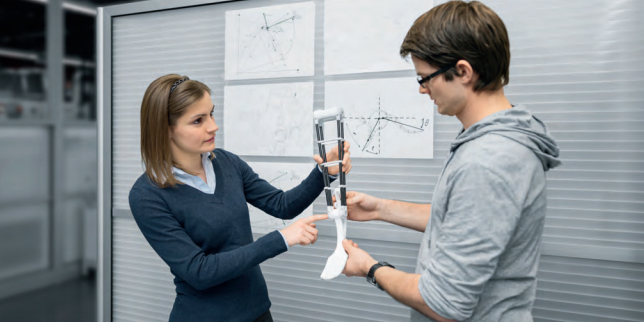 Holistic approach: The team spent two years on the technical implementation – from the right choice of materials …

Stimulus for production of the future

Besides the technical implementation of the unique jumping kinematics, the BionicKangaroo demonstrates several aspects of integrated automation at once: The system brings its components together in the smallest space. The many functions are coordinated using a highly complex control technology system. For Festo, the principle of permanent diagnostics is a guarantee of operational safety and process stability – whether on bionic objects or in an everyday industrial environment.

Other interesting approaches for the automation technology of the future are the concept of recovering, storing and efficiently reusing potential energy as well as the energy supply system thanks to mobile pneumatics.

Energy recovery in the automation sector

In industrial automation, knowledge about energy recovery and storage plays an important role – for instance when it comes to recovering heat on compressors or feeding electrical energy back into the mains.

Intelligent combination of pneumatics and electrics

The kangaroo achieves its high jumping power with the aid of pneumatics. Pneumatic actuators are generally powerful and highly dynamic. They are comparatively light and pliable, which means they also act as shock absorbers for the kangaroo on landing. In the places where the highest positioning accuracy is called for, electric motors are used – for example, when it comes to controlling the tail and hip.

Efficient solutions from the right selection

In everyday industrial situations too, the respective application decides whether the best solution is based on pneumatic or electrical drives or both.

As a specialist in both technologies, Festo offers its customers tailored solutions and supports them with a comprehensive service and the appropriate simulation tools.