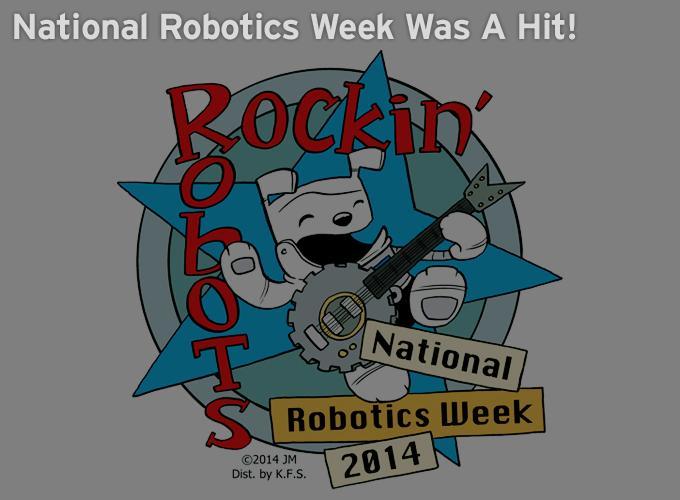 Headed by founder and lead organizer iRobot, along with support from robot enthusiasts throughout the country, the tech-heavy week is all about celebrating the United States as a leader in robotics technology development; inspiring students of all ages to pursue careers in robotics and other Science, Technology, Engineering, and Math (STEM) related fields; educating the public about how robotics technology impacts society, both now and in the future; and advocating for increased funding for robotics technology research and development.

A record 225 events focused on everything robots and held in all 50 states. Events are organized by a wide range of parties, including robot companies, institutions, educators, government agencies, universities and individuals who are making a mark on the world of robots. Some of the robots are not new, but interesting enough to review.

One of the more fascinating and useful robots is the WinBot—a robot that cleans your windows, mirrors, and other glass surfaces. This compact, square droid will attach itself to a glass pane and then scuttle around scrubbing off all the weeks of accumulated dirt, which it encounters. It automatically covers the entire surface that it’s placed on, and then stops when it’s finished, alerting you with a flourish of beeps.

When the Winbot completes its job, a remote is used to guide it back to a reachable spot on the window. It can then be turned off, removed from the glass, and retrieved.

Originally introduced in 2006, the robotic Pleo disappeared as the company went bankrupt, but visitors at the Museum of Science and Industry in Chicago saw the return of Pleo.  Pleo is an animatronic pet dinosaur toy designed to emulate the appearance and behavior of a week-old baby Camarasaurus.

Each Pleo would learn from its experiences and environment through a sophisticated artificial intelligence and develop an individual personality.  Pleo has a lot of sophisticated hardware, including 14 motors, 38 sensors, two ARM7 microprocessors, and five other microprocessors. Forget a dog, just get a Pleo for a pet; you don’t have to feed it.

Thinking about insect swarms can make your skin crawl. But those thoughts inspired the creation of small robots that as a group can build a simple structure, with each robot working independently and without a blueprint.

Modeling the behavior of termites, a Harvard research team has assembled small robots, named TERMES, and developed software that enables them to build something without supervision. Working with no central control, the robots instead are guided by simple rules as they interact with their environment, tools, and each other.

TERMES units are only aware of their immediate vicinity and have no concept of the progression on the structure as a whole, or of the work conducted by their fellow robots. They simply build what is in front of them to its final state.

Most flying robots are programmed to avoid obstacles, which is not easy in chaotic environments. Insects often collide with obstacles and continue flying afterwards, as does GimBall, a flying robot that can collide with objects seamlessly, remaining stable even after taking hits from all sides. This approach enables GimBall to fly in tricky places without complex sensors.

The inner frame comprises everything a flying robot needs to stabilize in flight: a coaxial motor, two control surfaces, the battery, and inertial measurement unit and control electronics. In the case of a collision, GimBall’s spherical protective frame prevents obstacles from touching the inner frame and can passively rotate thanks to a gimbal system (hence the name).

The Beam+ (a telepresence system) was created to be used at home with a big camera, big screen, big speakers, an intuitive software interface, and the ability to drive around anywhere except up/down stairs. If you have a Wi-Fi connection, you'll get two-way streaming audio and video from anywhere in the world.

With a 10-inch LCD screen, an HDR camera plus a dedicated navigation camera, and a four-microphone array, the Beam+ offers an excellent telepresence experience. There are no buttons anywhere on the robot.  The kids can't directly turn it on or off even if they wanted to. It's all controlled remotely, via the web interface, and Beam+ just sleeps on its charging dock until someone logs into it.

At work or away on a trip a parent can check on the kids and discuss their homework. If there are two Beams at home, the husband can talk to his wife face to face or Beam to Beam.

One job that I hate is cleaning gutters, as we have a lot of trees in the yard and the gutters constantly get filled with leaves and other debris. Now I can stop climbing a ladder, moving it every few feet.  With the iRobot Looj 330 Gutter Cleaning Robot, I can place the ladder in one spot and let the robot travel for me – blasting away leaves, dirt, clogs and sludge all on its own.

The 4-stage auger breaks apart clogs, then lifts and throws them away from your roof as sweepers and a scraper clear the remaining debris. The Looj 330 also comes with an extra set of smaller, more compact ejectors so you can customize your auger for different types of debris. The detachable handle does double duty as Looj’s remote command center. With a communication range of up to 50’, the remote gives you complete forward and backward control.

Students and faculty from the University of Notre Dame’s College of Engineering hosted an event on the South Bend campus to commemorate National Robotics Week. The free event was designed to attract students and families in the community and reflect a shared interest in robotics.

One of the most popular exhibits was the DISCOVER Laboratory, with a team from Notre Dame’s electrical engineering department. The exhibit featured several robots that were programmed to move based on different signals. Most of the children in attendance were amazed by a flying quad-rotor, remote-controlled helicopter that moved in both direction and altitude by following the position of a yellow ball. Kids lined up and took turns moving the ball around the room, watching the quad-rotor helicopter follow.

The Locomotion and Biomechanics Laboratory featured a set of small humanoid robots that could walk, recognize a ball and kick it while remaining balanced.  Other exhibits included robots that could react to color, robots that would follow signals from pre-established and adjustable maze patterns, robots that played catch with toy balls and footballs, and even more in-depth exhibits explaining the sciences behind how robots are programmed to see and react to the world around them.

For you card collecting robot fans iRobot teamed up with IEEE Spectrum and Georgia Tech’s Institute for Robotics & Intelligent Machines (IRIM) to create a set of robot trading cards! For diehard collectors, they plan to make more cards next year.

At almost every event there are classes in electronics, 3D CAD, including 3D coordinate geometry, robotics, digital logic and programming. The purpose of the events is to improve technological literacy by increasing the interest as a means to an end. Hopefully, students will design it, make it, and feel empowered by it. The aim is to get students excited about engineering and robotics and to show the opportunities it provides.

For more information on National Robotics Week go to http://www.nationalroboticsweek.org/about.php.