Obviously, nanomanufacturing will require new kinds of skills that are needed for these high-tech manufacturing jobs, which require specialized education, such as powder processing and metallurgy extraction. 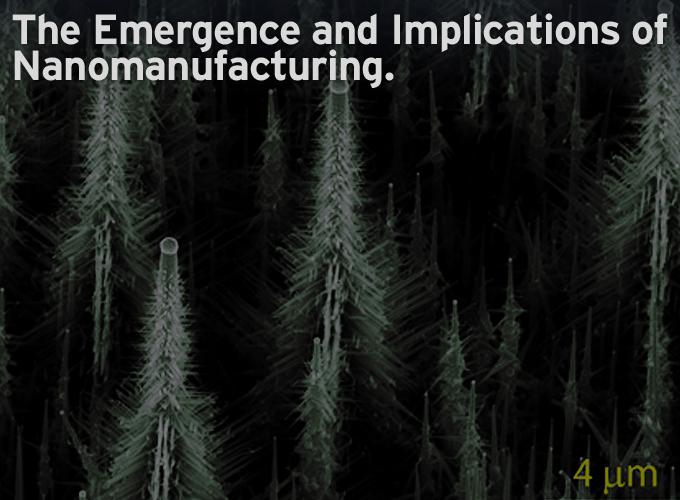 There have been many technologies that have emerged in the past to change our lives, such as cars, plastics, and semiconductors. Nanotechnology could produce new developments in materials implementation. Clothing, energy, medicine and tools could all benefit. Smartphones, computer tablets, and targeted therapeutic drugs already benefit from nanotechnology.

What exactly does nanoscale mean?  Nanotechnology has been defined as the control or restructuring of matter at atomic and molecular levels in the size range of about 1 to 100 nm.  A nanometer (nm) is one-billionth of a meter. A DNA molecule is 2 nm; a red blood cell is 10,000 nm; and the width of a hair is 75,000 to 100,000 nm

Materials at the nanoscale (nanomaterials) can be stronger, lighter, more robust, or scratch-resistant.

Nanoscale transistors may lead to computers that are faster, more powerful, and more energy efficient than those utilized today with increased information storage capacity, storing its entire memory on a single miniature chip. Even batteries and solar panels will become highly efficient and low cost.

Many patients suffer from serious pain. A combination of morphine and THC (THC is the intoxicating part of marijuana) could be a great pain killer, but to be useful, the two molecules need to be linked. By joining these by a single linking particle, a single super molecule could be designed.  Once in the body, the parts would break apart, releasing the morphine and THC in equal, targeted doses.

Morphine and THC combo makes for a super pain killer

Researchers have come up with a solution to decrease morphine doses thus reducing risk of dependency and addiction. Their solution is to combine marijuana with the morphine.  As it turns out, the psychoactive drug in marijuana, THC, enhances the painkilling effects of opioids such as morphine. This is good news for those in constant pain.

Chemotherapy treatments often damage healthy cells as well as cancerous ones, leading to serious side effects. Scientists are working to engineer nanostructures capable of delivering medication directly to targeted tissue, eliminating the side effects.

A new type of nanoparticle can carry three or more chemotherapy drugs at the same time. Previous generations of nanoparticles could only carry one or two drugs, which limited their ability to successfully impede the development of cancer tumors. Nanoparticles can be guided to attack only targeted cells through a variety of methods, such as using magnetic fields, or tracker proteins on their surfaces.

At the same time, carbon nanotubes have found several uses that can improve our lives. A carbon nanotube is a tube-shaped material, made of carbon, having a diameter measuring on the nanometer scale. The graphite layer appears somewhat like a rolled-up chicken wire with a continuous unbroken hexagonal mesh and carbon molecules at the apexes of the hexagons. Nanotubes can be envisioned as one-atom thick sheets of carbon that have been rolled into tubes.

A new nanotube-based imaging system could take clearer, faster pictures that are much better than today's X-rays and CT scans. Such a device will be especially useful for imaging organs that are continuously in motion, like the heart and lungs.

Nanotubes could replace the silicon-based computer chip. Several research groups have found ways to "unzip" carbon nanotubes to produce atom thick ribbons of graphene. Like silicon, graphene is a semiconductor, but the nano-sized ribbons could be used to pack much more processing power on every computer chip. (article on graphene)

Researchers at the University of Tokyo took a computer screen and folded it in half, and even crumpled it, without affecting its function. They constructed a display made of organic light-emitting diodes (OLEDs) paired with a rubbery, nanotube-based conductor. As nanotubes are natural semiconductors, they channel the electricity to the organic compounds.

Because the life of a smartphone depends on the battery, nanomanufacturing will eventually enable the production of longer-lasting batteries. Researchers have found a way to use silicon nanowires to reinvent the rechargeable lithium-ion (Li-ion) batteries that power laptops, iPods, video cameras, cell phones, and countless other devices. These batteries produce 10 times the amount of electricity of existing lithium-ion batteries. A laptop that now runs on a battery for two hours could operate for 20 hours, which will make business travelers very happy.

A key advantage of the ultra-thin solid-state battery is its physical flexibility, enabling different sizes and shapes of bendable batteries, as thin as 200 microns, making it ideal for portable and extremely small form-factor devices.

Because the government is pushing for battery powered cars, we will see the battery-powered vehicle market expand. Such a demand would, in turn, increase global demand for nano-improved batteries, but this growth could be slowed if future gas prices remain steady or decline, thus reducing incentives for switching from gasoline-only vehicles.

Concrete is the most broadly used construction material in the world; and the use of it will increase as the infrastructure requirements of the global population grow. Nanomaterials can augment the performance of the concrete used to construct this infrastructure. Some of the potential benefits of using nanomaterials in concrete mixtures include improved strength, density, and permeability. Roads, bridges, and buildings will be easier to build, last longer, and function better.

Natural disasters cause billions in damage to buildings.  The University of Leeds' Nanomanufacturing Institute built a prototype house on a Greek mountainside, using sensors in the walls, which will record stresses and vibrations, temperature and humidity levels. This is nothing out of the ordinary, but the house will also have special walls made from nanopolymer particles that will turn into a liquid under pressure, flow into the cracks, and harden again. The experiment is ongoing.

While the U.S. government is investing considerable funds in alternative energy projects, the investment in establishing technology platforms, technology transfer, and commercialization is lacking. Other countries, such as Russia, China and the European Union are making larger investments.

Since nanomanufacturing takes place entirely at a scale invisible to the naked eye, we will see nanobots construct everything from delicate fabrics and super-strong steel to computing components. Nanomanufacturing is an emerging global megatrend that will bring future world changing growth.