The UBR-1 was quite an achievement that sadly will not come to market. 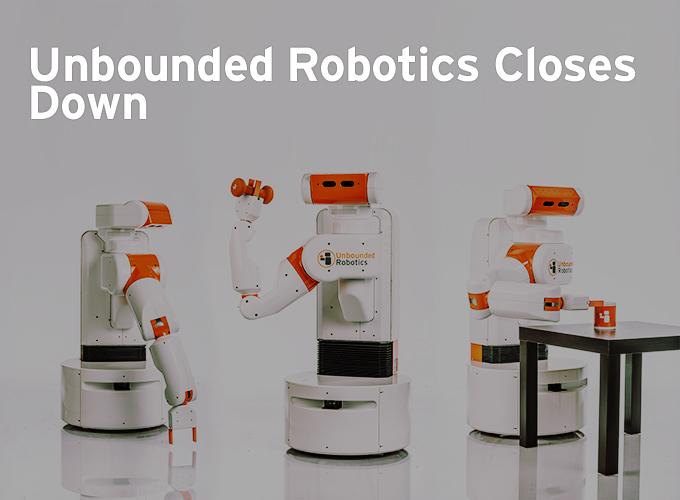 For confusing reasons, Unbounded Robotics has shut down. Their $35,000 UBR-1 single-armed mobile robot that was shown late last year to great fanfare is no longer offered for sale.

"Why?" is the big question. Unbounded was one of the start-up spin-off companies incubated by Willow Garage. Unbounded's UBR-1 robot was produced by the same team that developed Willow Garage's $400,000 PR2 personal robot except that the UBR-1 only had one arm, used lower-cost building materials, and had a price of $35,000 - a phenomenal 1/10 the cost of the PR2! Both used the ROS open source robotic operating system.

At their launch in late 2013, they displayed and demonstrated multiple UBR-1s and described commercial applications ranging from material handling to picking up room service trays.

But early on there appeared to be a shift in focus to academia. It's true that Rethink Robotics' two-armed Baxter at $25,000 and UR's one-armed UBR-1 at $35,000 are the cheapest robots with arms (and mobility with Unbounded's UBR-1) available to the research community. Both offered SDKs so that applications could be developed and shared. But the academic marketplace is very limited and slow to purchase. Rethink is having some success on that front; perhaps Unbounded wasn't.

In early July, things at Unbounded came to a halt. Principals changed their LinkedIn profiles and dropped their employment with Unbounded to "Previous." The PR firm and other suppliers were told of the closure. An email from CEO Melonee Wise said that Unbounded was shutting down due to issues with the Willow Garage spin-off agreement which prevented them from raising an A round of equity funding. Perhaps there was an anti-dilution clause that was a sticking point and gave pause to prospective investors. Generally these are things that get negotiated and resolved. Except in this case, to date, it has not been resolved and the closed doors are truly closed.

Evan Ackerman pondered the situation in an article posted on IEEE/Spectrum Automaton. Dan Kara posted a thoughtful piece for ABI Research wherein he postulated alternative reasons for Unboundeds closure, analyzing whether it was a failure, a non-negotiable clash, or something else.

Both Ackerman and Kara remarked on Unbounded's achievement of providing a mobile manipulation platform at an affordable price. The UBR-1 was quite an achievement that sadly will not come to market.