Robots are proving to be flexible tools for aircraft manufacturing and assembly. Their full potential however can be limited by the challenges of programming a robot in a CAD/CAM environment. Software that integrates offline programming, simulation, code generation, and path optimization makes the process seamless and error-free. 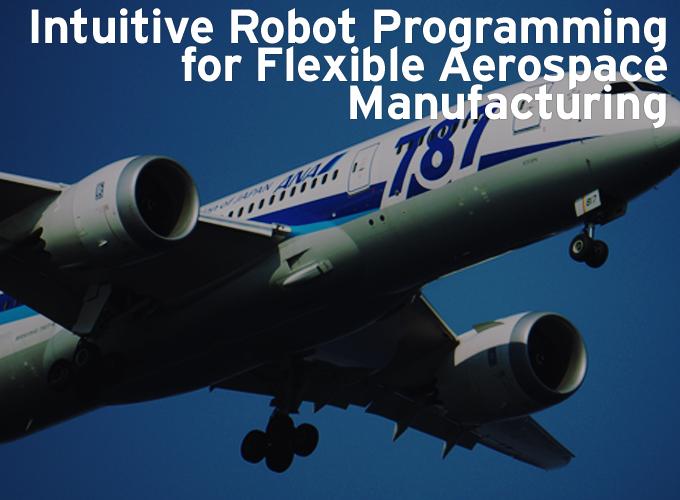 Robots are poised to transform the aerospace industry the way they revolutionized automotive assembly in the late 1970s and ‘80s. Increased productivity and cost savings are fueling the move toward flexible robotic automation.

Unlike their land-bound cousins, aircraft have key differences that defy the automation paradigm. Aerospace manufacturing tolerances are much tighter, while the subassemblies tend to be significantly larger and heavier. Compared to automotive, aircraft production volumes are much lower, while the life expectancy of commercial aircraft is measured in decades, not years.

Global demand for aircraft is rising, straining current manufacturing resources. The Advanced Manufacturing Research Centre with Boeing (AMRC) is on the frontlines of this industry trend.

“Sales of commercial aircraft are increasing,” says Ben Morgan, head of the Integrated Manufacturing Group at AMRC. “The majority of manufacturers have pushed their production capacity to the absolute limit and further capital investments are needed to reach the targeted rate. For some platforms we’re working on, this might be up to 60 aircraft a month, which is an incredible amount. So a step change in manufacturing is needed.”

That step change is coming in the form of flexible robotic automation.  Ushering the robots’ foray was the advent of composites in aircraft component manufacturing.

According to a study by market research firm Lucintel, the global aerospace composites market is expected to reach $112 billion annually by 2017, with a compound annual growth rate of 5.3 percent over the next five years (source: CompositesWorld).

The composites revolution helped extend the jet way to robots. Robotic machining and material removal is increasingly being used in nonmetallic and metallic applications, including milling, drilling, surfacing, riveting, and waterjet cutting and trimming of composite skins and components for large commercial aircraft.

For years robots were peering over the shoulders of their computer numerically controlled counterparts. Now the focus has shifted.

“With advances in robotics over the last 10 years, serial-arm devices are becoming a more feasible option,” says Morgan. “There’s been a boom in interest in robotic trimming, routing and machining. By developing concept robotic trimming systems and the facility we have at the AMRC, we’re starting to prove to high-end automotive and aerospace manufacturers that flexible cells are an alternative to some of the traditional, expensive CNC machine tools.”

The AMRC was established in 2001 as a collaboration between the University of Sheffield and Boeing. Located in a sprawling high-tech industrial park in Sheffield, England, it employs more than 400 researchers and engineers focused on modernizing manufacturing by testing and proving different technologies, and has more than 100 member companies ranging from global aerospace giants to local small businesses. 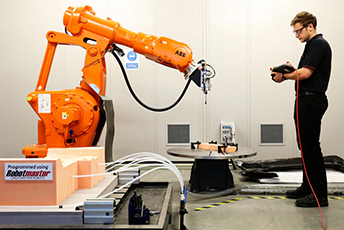 “We’re talking maybe $15 million for some of the big CNC machines that are being used to manufacture these aerospace parts,” says Morgan. “For a robotic cell we would probably be looking at a couple of hundred thousand dollars.”

The cost of deploying robots continues to decline, while their rigidity and accuracy is improving.

Most top-tier aerospace suppliers recognize the advantages of deploying robots for their subassembly operations and have even earmarked annual budgets for robotization. But for some, robot programming is the quagmire.

Singularity, calibration, collisions, reach limitations, and motion granularity are uniquely complex to robotic systems and can make programming robots for machining operations particularly cumbersome. Navigating around the errors can be time-consuming.

Companies accustomed to using CNC machine tools get stuck when they try to deploy a robot for the first time. They often try to use the robot manufacturer’s software for programming. However, this software is typically intended for simulation purposes, not programming. In a simulation environment you can see the error, but the difficulty lies in identifying the cause and how to fix it.

A different approach is to try to use CAD/CAM point converters, which create robot trajectories for different types of applications. The point converters tend to do a quick and inexpensive conversion to a robotic system, but there is no way to validate kinematics and check for errors.

The main problem with these methods is the lack of a path optimization tool. Once the program is applied to the robot, there may be a lengthy prove-out period.

“When we decided to buy a new solution to tool composite parts with a robot, we could not have imagined how different the robotics world was from our traditional CNC machine world,” says Eddy Coubard, CAD & CAM production engineering manager at SOGERMA COMPOSITES AQUITAINE. “New vocabulary, a new working method and new problems, it was a challenge.”

Celebrating its 30th anniversary, SOGERMA COMPOSITES AQUITAINE is a wholly owned subsidiary of SOGERMA Group, and is based in France with 475 production and R&D personnel supporting more than 100 major suppliers in Europe and around the world with high-performance composite material products.

“We tool aeronautic composite parts in small quantities, which means we have to get the robot programming right the first time,” says Coubard. “Otherwise, our costs increase dramatically.” 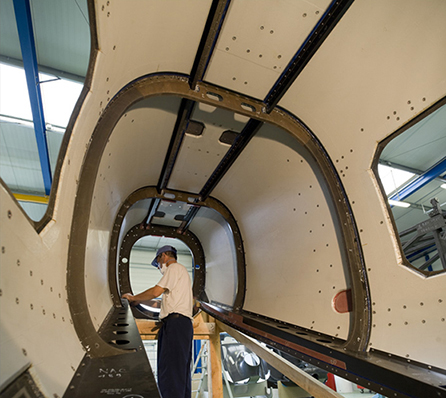 “The first robotic software we tried was not efficient at all,” he says. “It required making the tool path in CAD/CAM software and writing a kind of G-code with a post-processor, then reading this G-code on a simulator, only to realize that most of the time there were errors. Then we had to go back to the CAD/CAM software and write the robot code through another post-processor.”

This is the typical scenario. A company acquires a robot, tries to deploy it for a machining operation, only to realize that they don’t have the proper software for the job.

A better strategy: Consider the robot programming software up front. This should be done either at the time of robot system acquisition, or even prior to the purchase.

CAD/CAM software specifically designed for programming robots addresses issues with singularity, collisions, joint limits, reach issues and wrist flips. The right software should automatically calculate and optimize robot trajectories, seamlessly integrate external axes, and provide instant visual feedback. It should be easy to use, even for operators new to robotics.

The software should also support offline programming, without interrupting production on the shop floor other than for the final test and fine-tuning. Changeovers then become a parallel, rather than a sequential, operation. 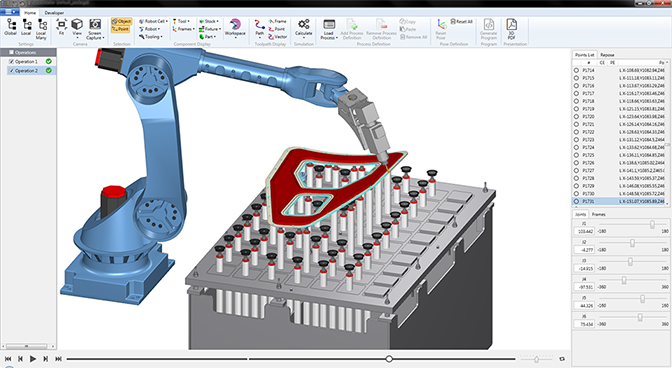 “A robot can be a difficult device to manage,” says Chahe Bakmazjian, president of Jabez Technologies. “It consists of six rotary joints stacked one on top of the other, so it’s very difficult to anticipate errors. Usually you encounter the error when it happens. There’s no warning.”

“Aircraft manufacturers often put large robotic systems in place, but they’re only exploiting them to a limited area where they know they can avoid errors,” says Bakmazjian. “Any time they want to go outside those areas, it becomes very restrictive.”

COMPOSITES AQUITAINE’s Coubard says that by replacing their old software their programming time was reduced by two to three times.

“Robotmaster allows us to work in the same way we used our CNC machines to tool parts,” he says. “Since Robotmaster also interfaces with Mastercam® software, we were able to quickly and easily perform full 7-axis milling and drilling.”

Coubard says they are using Robotmaster to program a rail-mounted 6-axis robot. Applications include tooling thermal protection parts made of glass fiber for the Airbus A330 airliner and honeycomb for the Airbus Super-Puma MK II helicopter.

“With Robotmaster we’re able to embrace the world of robotics. Now we can tool our composite parts in the same easy way we used to tool them with the CNC machine,” says Coubard. “In fact, the new simulation feature is so powerful that we have yet to exploit all of its capabilities.”

Without Robotmaster, Coubard says they would have most likely abandoned robotics and gone back to old CNC machining methods.

At the AMRC, Morgan’s group uses robotics and metrology to develop new methods for assembling complex products for aerospace and other high-value industries.

“We’ve been working with Robotmaster for the last three years,” says Morgan. “The software has allowed our operators and engineers to quickly and effectively reprogram the cell, as well as optimize the machine path. It has great flexibility and control.”

“Using this software lends itself to the research environment in particular, because our range of work and part variability,” says Morgan. “We don’t manufacture anything here, so often we end up doing one, two, or three parts and then we’ll move on to another part. But the aerospace sector itself is demanding reconfigurability as well, so we’re meeting that requirement with Robotmaster.”

Operators report that the software works 100 percent of the time – the first time – without the need for manual teaching intervention or touch-up. It’s error-free robot programming without the complexity. So easy, even a newbie can use it.

Couple a flexible robot with an advanced software solution. Now you’re free to exploit the entire robot workspace. What first appeared as a liability of an overdetermined system with various ways to reach the same point has now become an opportunity given sophisticated path optimization tools.

Robots have proven their airworthiness. They just need the right software to realize their full potential.

Because there is more to automation than selecting a robot, working with a robot or system integrator can be extremely valuable to ensure the full robotic system is properly designed to achieve the desired results.