If you think about the global population growth and the need to feed this mounting population, farmers must become more efficient at the harvesting and production of all crops. In the future, robots will be utilized to accomplish most tasks, from seeding to fertilizing as well as chemical application. 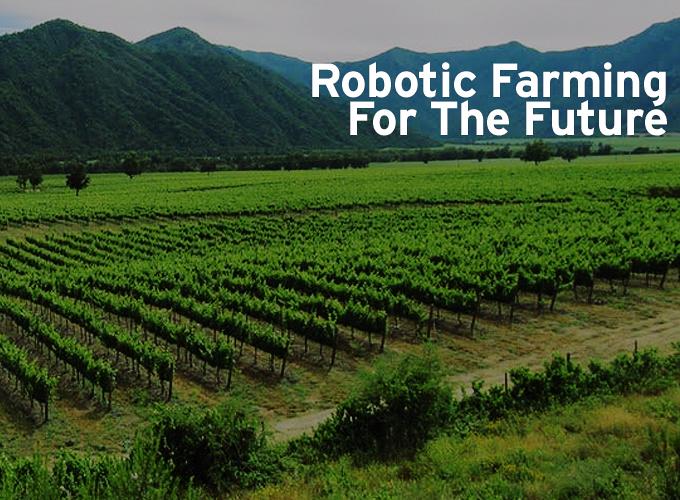 The day of the itinerant farmer might just be a thing of the past, as robots will be handling the chores on commercial farms in the future. These robots will identify produce from surrounding leaves; spray periodically for insects; and pick individual pieces of produce, such as grapes, peppers and apples at harvest time.

When spraying pesticides, the field workers are exposed to harmful chemicals. A system of autonomous spraying robots could reduce a farm's use of pesticides by up to 80 percent because robots can be highly selective where they spray.

Drones are also being employed on the farm to identify fungal diseases in the field well before crops show signs of infection, and thus allowing for earlier and more successful treatment. A GPS directed drone, which is equipped with a camera, will take high-resolution images of crops, giving farmers a birds-eye view of which crops are healthy and those, which need care. Farm drones could also allow for targeted spraying, especially for specialty crops that are either too difficult or too dangerous to spray with manned aircraft. Researchers at the University of California, Davis are experimenting with farm drones for spraying grapes in Napa Valley.

Sufficient harvest workers sometimes are in short supply at harvest time. Robots can offer a timely supply of labor at the right times in the harvesting cycle, especially in farms that are located away from population centers.

There are challenges to locate sufficient itinerant labor to do some of the crop harvesting, such as strawberries, as the work is very backbreaking. During harvest, time is critical, as some crops must be picked quickly. Therefore, many laborers will be required for a fairly short period of time, which creates a real challenge for keeping people employed in a sustainable manner.

Trying to develop robots for agricultural labor for a long time has been a goal of commercial farmers. Recently, researchers have been teaching robots to see like we do.  If successful, robots will work and learn in the field.

Modern commercial farms already use tractors with automated steering to till the land; and dairy farms are using machines that can milk cows; but seeking out individual fruits or vegetables is a much more challenging task.

Robotic milking machines are taking some of the labor pressure off farmers by both feeding and milking cows without involving a single human, saving farmers time and labor costs. The cows can choose when to be milked and each cow gets personalized service because of a transponder necklace that charts the amount of milk a cow has. The transponder can track the amount of grass the cow has consumed and even how many steps it has taken.

No two pieces of produce looks the same, as each piece has a unique shape, size, and color. Shadows and lighting change throughout the day and night, making an individual fruit or vegetable look different under changing conditions. Many green vegetables look much like the leafy bushes or vines they grow on.

An example of this problem is harvesting green beans, as green beans have to be picked when they are young and tender, before the seeds inside form bumps on the pod. The more you pick them the more they will produce, so they need to be picked every 2-3 days. If you leave the beans to ripen, the vine will stop producing and die.

In order to find organization within the virtual disorder of an agricultural environment, researchers are working on intelligent sensing systems. Multi-spectral cameras that analyze wavelengths of light bouncing off of objects can be used to find a consistent pattern that would tell the robot when it is seeing a pepper, as an example, no matter whether that pepper was right-side-up or upside-down. The robot would then learn from its mistakes and improve as it works. An algorithm will see simple shapes, and when produce is partially covered by leaves, it will not use the full-shape algorithm; but since it only sees part of the veggy, it will complete the shape.

After the robot identifies the crop, it needs to pick it. Therefore, a grasping tool that will grab produce in the right place and pick it with the right amount of firmness will be needed. Researchers are studying human hand movement and using another set of algorithms to replicate what comes easily to human hands.

A lettuce robot is capable of hoeing away ground weeds from around the base of plants. The lettucebot can thin a field of lettuce in the time it takes about 20 workers to do the job by hand.

A wine robot rolls through vineyards pruning vines, while other robots are under development to remotely check crops for their growth, moisture and signs of disease.

There's a new vineyard worker in France, which has four wheels, two arms and six cameras, prunes 600 vines per day, and never calls in sick. The Wall-Ye V.I.N. robot, which is the brainchild of Burgundy-based inventor Christophe Millot, is one of the robots being developed aimed at vineyards struggling to find the labor that they need.

It assumes tasks, such as pruning and de-suckering (removing unproductive young shoots), while accumulating important data on the health and vitality of the soil, fruit and vine stocks.

Vision Robotics, a San Diego company, is working on a pair of robots that would move through orchards plucking oranges, apples or other fruit from the trees. In a few years, these machines could perform the labor-intensive chore of fruit picking that currently employs thousands of migrant workers each season.

The two robots would work as a team, as one would scan the tree and build a 3-D map of the location and size of each orange, calculating the best order in which to pick the oranges. The other would be a metallic octopus with a gentle touch. The first robot will scan and send information to the second robot, a harvester that will pick the tree clean, following a planned sequence that keeps its eight long arms from bumping into each other.

In order to feed the billions of people in the world, farmers must depend on robots. The population growth in America is staggering since the U.S. population has grown by 22.5% between 1990 (estimated 250 million people) and 2010 (310 million), and the Census Bureau expects it to increase to more than 420 million in 2050.

If you think about the global population growth and the need to feed this mounting population, farmers must become more efficient at the harvesting and production of all crops. In the future, robots will be utilized to accomplish most tasks, from seeding to fertilizing as well as chemical application. It's just not feasible to farm by hand anymore.