Single-cell management has traditionally been accomplished with pipettes, optical tweezers, or specialized small volume designs. Now, other bio-inspired methods rely on controlling applied magnetic forces, such as the wireless control of microrobots. 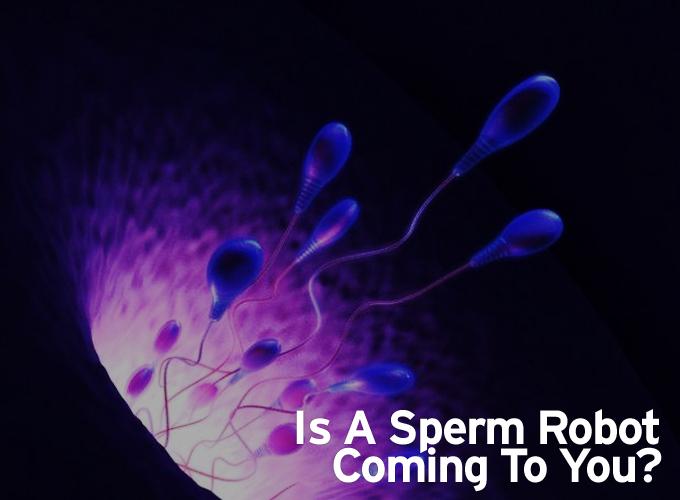 In the future, spermbots (micro-robots, biorobots) could be used to deliver drugs to a very specific part of the body or to help fertilize an egg. The first ever biological robots powered by sperm have been created by scientists at the Institute for Integrative Nanosciences in Germany.

Researchers have managed to trap single sperm cells inside metal nanotubes. The combined cells and magnetic metal tubes were controlled by using live flagella from bull sperm —yeah, you read that correctly— to maneuver the nanotubes in a desired direction using magnets. This is right out of a science fiction book. To alter the speed of the cells changes in temperature were used.

The researchers created magnetic nanotubes that were 50 microns long with a diameter of 5 to 8 microns. They placed the nanotubes into a solution containing bull sperm. To catch the sperm and stop them from escaping, the tubes were narrower at one end and wider at the other. They then could be directed by utilizing a magnetic field. The tail-like part of the sperm cell pokes outside the end of the tube to power the spermbot like a propeller. The trapped cell pushed against the tube, moving it forward. Since sperm don’t inherently go where you want them to go, a sperm-driven micro-biorobot is used to magnetically guide and deliver drugs in biomedical applications.

Sperm cells are an appealing choice because they are harmless to the body, and they can swim through viscous liquids, not needing an external power source. The researchers use nanotubes and work with thawed-out bull sperm cells, which remain viable for several hours. The nanotubes are made from iron and titanium nanoparticles.

The combination of a biological power source and a micro-device is a persuasive methodology for the creation of new micro-biorobotic devices with intriguing future applications. One of the applications is in-vitro fertilization. These micro-devices could be used to direct individual sperm to eggs. Other uses would include delivering targeted doses of drugs to specific parts of the body, and treat diseases, such as cardiovascular disease and diabetes with the most important application being to treat cancerous tumors.

This novel system could be used to improve the efficiency of in-vitro fertilization techniques and reduce the number of unintended multiple births that in-vitro techniques cause. According to a report published in the American Journal of Obstetrics & Gynecology, pregnancies that end in the delivery of twins cost about five-fold more than singleton pregnancies, and the delivery of triplets or more cost nearly 20 times as much as singletons.

Another interesting feature about this research is how it involves use of micro-biorobots as opposed to artificial engines. A nanobot intended to move through bodily fluids should not be toxic to the human body, and should not cause harm to cells.

Targeted drug doses deliver medication to a patient in a way that increases the concentration of the medication in certain parts of the body and not so much in other parts. The purpose of a targeted drug dosage system is to extend, localize, and have a protected drug interaction with the diseased tissue. The conventional method of delivering medication is the absorption of the drug across a biological membrane, whereas the targeted system releases the drug in a dosage form.

The advantage of the targeted dosage system is the reduction in the frequency of the dosages taken by the patient, which has a more consistent effect of the drug.  It also reduces the drug side effects, and reduces instability in circulating drug levels. With traditional delivery systems, such as oral ingestion or intravascular injection, the medication is distributed through the body using the blood's circulation. For most therapeutic agents, only a small portion of the medication reaches the organ to be affected.

This sperm technique reduces damage to healthy cells in the body and allows for earlier detection of a disease. One of the greatest challenges in targeted cancer therapy is achieving accurate delivery of the beneficial agent directly to the cancer cells you wish to affect. Tests are under development for the targeted delivery of chemotherapy drugs directly to cancer cells.

Targeted cancer therapies are medications that block the growth and spread of cancerous cells by interfering with specific molecules needed for tumor growth. These targeted treatments are designed to hamper only cancerous cell reproduction and tumor growth, whereas conventional chemotherapy based treatments destroy healthy cells along with the cancerous ones. Biorobotic therapies are less toxic to normal cells. They also improve the outcome in patients.

Targeted therapies use a simple, single step micro-fabrication technique that allows production of a large amount of micro-biorobots at one time. Micro-biorobots can be navigated to reach separate single cells with micron-size precision without disturbing the local environment.

Very small magnetic forces are required for movement, and as a result of the sub-micron resolution of the process, the robot’s shape can be tailored and scaled for compatibility with different cell types. Release in the micro-environment is enabled by a biocompatible, water-soluble process.

Micro-biorobots on the scale of the cells themselves offer significant advantages beyond merely moving cells. Untethered micro-biorobots are highly noninvasive. At this length scale, where viscous fluid forces dominate inertial forces, mobile micro-biorobots cause very little assimilation or disturbance of the surrounding environment.

An important consideration for the system is the workspace for the biorobot. When working with single cells, the slight details of individual cells must be determined. It is essential to have micro-biorobots with sizes similar to the target cells in order to transport and position them with particular precision.

Single-cell management has traditionally been accomplished with pipettes, optical tweezers, or specialized small volume designs. Now, other bio-inspired methods rely on controlling applied magnetic forces, such as the wireless control of microrobots.

Magnetic control of microrobots has been established as an effective means of manipulation.

Significant challenges remain for applications relating to single cell management, using micro-biorobots. This is due to the need to scale the micro-biorobot designs. We can expect many new innovations in the delivery of medicine due to micro therapy.