I believe that highly specialized companies developing core components are responsible for progress in the field of robotics. 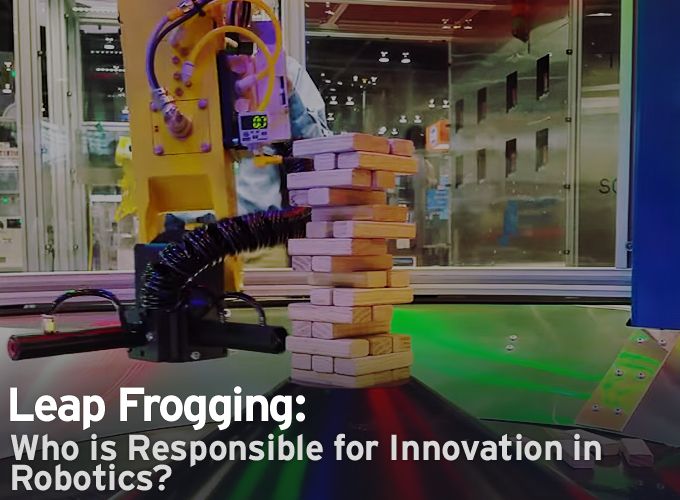 What drives innovation in the field of Robotics? That’s what I set out to discover at the Automate show this year. For a master’s student in Robotics, Automate 2015 was an otherworldly experience. One robot delivered a nicely warmed M&M cookie to me, another lost playing me in basketball, and yet another robot played Jenga better than I could ever play. Though each one performed such different tasks, they all had common general components like encoders, conveyors, actuators, vision, controllers, cables, and end-effectors (Figure 1). So who is responsible for advancements in robotics: companies that focus on the development of the industrial robots, or those that focus on the development of individual components?

Figure 1: Fanuc robot used for welding purposes by Lincoln Electric. Picture is labelled to highlight some of the core components mentioned above.

There are some companies, like Mitsubishi Electric, that develop all of the necessary components in-house so that they integrate well. There are others, however, that focus on the development of industrial robots mostly by outsourcing common components. The advantage to this method is that you can pick and choose what you feel are the best components for an application, but then you’re tasked with figuring out how to fit these components together. Which option is better in terms of accessibility to new technology? Well, there are advantages to both. Kurtis Ullein of Mitsubishi stated in an in-depth conversation “in the world of automation, you have a lot of things that make up one solution and they all need to integrate/communicate. The nice thing about technological advancements is that most robotics companies end up leap-frogging each other.” In other words, companies drive each other to innovate, consistently building off of what another developed- in a collaborative, but also competitive sense.

I believe that highly specialized companies developing core components are responsible for progress in the field. For instance, Empire Robotics has developed a totally new kind of gripper, the Versaball, that conforms to any shape; these grippers are used by industrial robotic companies like Toshiba Machines in the TVL 500 (Figure 2). Co-founder of this new gripper startup, John Amend, says he feels that advancements will be geared toward making robotic technology more flexible and adaptable to different uses. He, as well other company representatives, believe that more focus will be placed on ease of programmability for users who do not have a background in coding. In addition, companies will be working towards faster and more efficient solutions.

There has been talk that we’re living in the fourth industrial revolution – one which is brought on largely because of the development and progression of large-scale industrial automation robots. Though a lot of well-deserved credit has to be given to the companies who are on the forefront of this revolution (ABB, Toshiba Machines, and Adept), I think that there is something to be said for the often overlooked companies that are working on developing specific components.

Ryan Guthrie, from Toshiba, very eloquently explained to me that, with regards to robotic development, the initial engineers got it “so right the first time” that development is no longer focused on the creation of the robots, but their advancements.

About Sabeen Admani
Sabeen Admani is a Master of Science in Robotics student at Northwestern University. Prior to the program, she graduated with an undergraduate degree in Biomedical Engineering from Northwestern University in 2012. From there, she went to work for Jump Trading Simulation and Education Center as a Simulation Engineer Supervisor, with a focus on developing training devices for medical professionals and researching surgical planning methods. She is particularly interested in research and development for robotics in rehabilitation and healthcare applications.