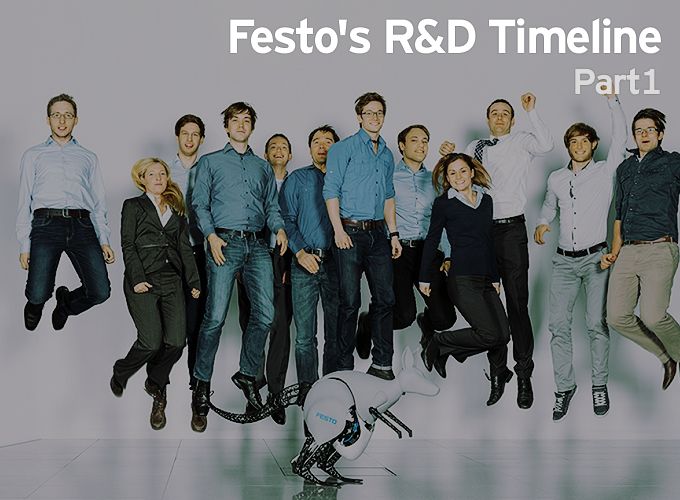 A hovercraft with thrust vectoring (2006)

The meeting of bionics with pneumatics is the source for ever more new ideas for the use of air in the Bionic Learning Network. The hovercraft is a perfect example of highly precise manoeuvring over land and water... (more)

Festo's fluidic muscles perform a completely different kind of bionic task in the humanoid muscle robot, which is a joint project of EvoLogics GmbH and the Faculty of Bionics and Evolutionary Technology at the TU Berlin. From an initial functional study with a simple bionic arm in 2000 and various intermediate stages, a torso with two anthropomorphic bionic arms and five-finger hands was developed... (more)

In this projectile, bionic refinement meets unusual drive forms that were originally conceived for outer space. The flow-optimised pneumatic structure is derived from the penguin.

The new bionic plasma drive in the stubby wings is a simplified copy of the mechanical wing propulsion of birds, without applying any moving parts. The tail is moved using the classic principle of the ion beam drive, which functions using air-ionising high DC voltage fields. The accelerated air ions produce an ion wind with a speed of up to 10 m/s... (more)

Robotino® is a mobile robot system with an omnidirectional drive, a learning system for basic and further training, and a research and development platform for universities and colleges, all in one system.

Modularity means that all technical components of Robotino®, such as the electric drive units, sensors and camera, can be directly understood and can also be learned within their integrated system behaviour. Trainees integrate and apply many technical features and functions, such as electric drive engineering, kinematics, sensors, control technology, vision systems and programming techniques, Basic technical principles are thus learned in an exciting and practice-oriented way... (more)

The Airacuda moves smoothly and almost noiselessly through the water. Its design, shape, and kinetics are based on its biological model.

Electronics and pneumatics are hidden in its waterproof head and control the S-shaped movements of the tail fin via two fluidic muscles. Two further muscles are used for steering.

The fin consists of an alternating traction and pressure edge, which are connected by frames. When pressure is exerted on one edge, the geometrical structure automatically curves against the direction of the influencing force. It sounds complicated, but it is actually a simple principle with which the fish can display the full swinging power of its fins in the water. This structure is called the Fin Ray Effect®... (more)

Stay Tuned for more stories about the timeline.