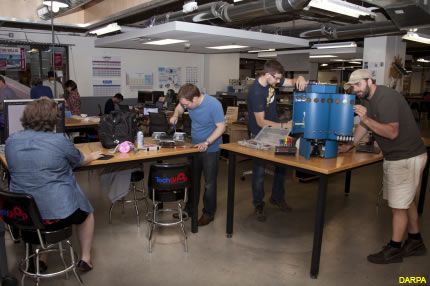 The past 10 years have seen an explosion of robotics advances from small businesses and individuals, thanks in part to lower manufacturing costs and the global rise of community workshops such as makerspaces and hackerspaces, which serve as incubators for rapid, low-cost collaboration and innovation. Unfortunately, the small-scale robotics community has tended to fly under the radar of traditional federal agencies and commercial technology providers, which generally rely on multi-year, multi-million-dollar contracts for technology development. This disconnect means that the U.S. government is not benefiting from some of the most cutting-edge robotics developers in the nation.

DARPA’s new Robotics Fast Track (RFT) effort seeks to help remedy this situation by enabling rapid, cost-effective development of new robotics capabilities designed to respond to, and even anticipate, quickly evolving warfighter needs. RFT will focus on the development of groundbreaking robotic hardware and software by funding clean-slate approaches as well as creative adaptations of existing resources. The goal is to achieve breakthrough capabilities in less time and at a fraction of the cost typical of government-supported robotic development processes by engaging highly agile organizations and individuals who traditionally have not worked with the U.S. government.

“We spend too much time creating three- to four-year solutions for six-month problems,” said Mark Micire, DARPA program manager. “We want this new generation of robotics innovators to see DARPA as a partner that can help them develop breakthrough technologies in the areas that personally interest them and help translate their ideas and know-how into game-changing capabilities. We’re eager to pioneer this new approach, which could lead to rapid, marked improvements in national security as a whole.”

RFT aims to develop prototype systems and proofs of concept over the next year, with each effort lasting 6 to 12 months at an average cost of $150,000. To encourage participation, DARPA has streamlined the contracting process to meet nontraditional performers’ needs while still meeting all requirements under the Federal Acquisition Regulations (FAR). “The goal is for successful proposals to take less than a month from submission to contract signing,” said Micire.

To help these nontraditional entities work with the federal government for the first time, DARPA is collaborating with the Open Source Robotics Foundation (OSRF) (www.osrfoundation.org), an independent non-profit organization founded by members of the global robotics community. OSRF focuses primarily on software development but plays a central role in the small-scale robotics community in advocating for the overall advancement of robotics research and development.

“Lots of smart people have good ideas for advancing the state of the art, but aren't ready to invest the time and effort necessary to navigate the government's traditional contracting mechanisms,” said Brian Gerkey, CEO and founder of OSRF. “Through RFT, we aim to support these people, explore their ideas and change the landscape of robotics at a pace that wasn't previously possible.”

OSRF has teamed with BIT Systems, a federal contractor with experience working on fast-track initiatives, including DARPA’s previous Cyber Fast Track program. BIT Systems is supporting RFT by acting as an interface between the government and performers, helping performers learn how to work with the government and how to present their work in ways that can to speed evaluation of their proposals.

Areas of technical interest that RFT intends to explore include:

Technology development beyond these areas will be considered as long as it supports the program’s goals, which include both jumpstarting a new public-private community of interest for national security robotics and building momentum toward a potential future DARPA program with funding levels at least an order of magnitude larger than RFT. Moreover, a number of other government agencies—including the U.S. Army, U.S. Navy, the Department of Homeland Security and the National Aeronautics and Space Administration—have expressed interest in evaluating successful RFT projects and performers for use in their operations.

Individuals and organizations interested in participating in RFT can apply athttp://ow.ly/METJ9. Additionally, OSRF representatives will attend the DARPA Robotics Challenge (DRC) Finals at the Fairplex in Pomona, Calif. on June 5-6, 2015. The representatives will be available to discuss RFT in the DRC Finals exposition area, which will feature 70 interactive displays where visitors can meet technology developers and emergency responders, and try their hand at controlling robots and other gadgets. More information about the DRC Finals is available athttp://www.theroboticschallenge.org/.