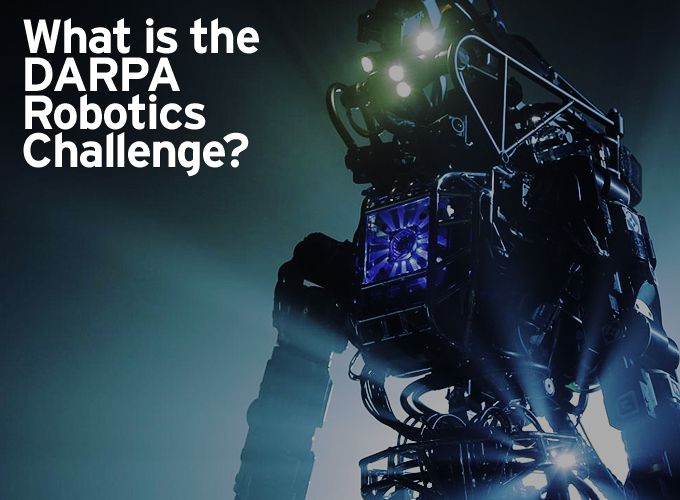 Being a first responder is a dangerous job. First responders never know what they will face or what obstacles they will need to overcome. They often have limitations as to what they can do to deal with a bad situation. This is where robots come into play. They have the potential to assist their human counterparts in situations where humans cannot safely function.

Despite the advances of robotics, today's robots are not yet tough enough to function in many disaster situations. In some cases, robots are not able to perform even fundamental tasks that are required to alleviate a crisis condition. This is where the DARPA Robotics Challenge (DRC) comes into play.

DARPA was created in 1958 as the Advanced Research Projects Agency (ARPA) by President Eisenhower with the purpose of formulating and executing research and development projects to expand the frontiers of technology and science to go beyond military requirements and benefit everyone. A couple of its more important successes in the non-military information technology field are computer networking and graphical user interfaces (GUI).

Because of the inability of robots to successfully release pressure valves in the Fukushima nuclear plant following the earthquake and tsunami that struck Japan in 2011, DARPA decided to establish a new generation of robot and human teams to mitigate disasters during those few days and hours when it’s still possible to make a difference.

The DRC's concept is to develop robots that can operate in spaces that are designed for humans, use tools that are built for humans, and can be controlled with only minimal training by people who are not robotics experts, so that the robots could be quickly integrated in assisting human-led response teams to address future emergencies.

The DRC is a competition of robotic systems and software teams competing to create robots able to assist humans and react to natural and man-made disasters. The competition was designed to be particularly complex. Technologies resulting from the DRC will transform the field of robotics and advance the development of robots with task-level autonomy that can operate in the dangerous conditions common in disaster zones.

The competitive teams will send their robots into an environment that mimics what might be found in a real-life crisis area. This includes terrain containing rubble, broken metal and wood pieces, and a lack of clear areas in which to maneuver. The humans and their robots work together as partners, as each does what they’re able to cope with despite corrupted communications.

The teams will rely on wireless communications to communicate with their robots, but the humans must be prepared for the robot to operate autonomously when the communications cease to exist, meaning there will be times when the human teams will have no feedback from the robots, and the robots must be able to sustain their work without human assistance.

Last month twenty-three teams participated in the DRC. Taking first place was Team Kaist (Republic of Korea) and their robot, Hubo. First prize was $2 Million. Second place went to Team IHMC Robotics from Pensacola, Florida and its robot, Running Man. Their prize was $1.5 Million. The third place prize of $500,000 went to Tartan Rescue of Pittsburg, Pennsylvania and its robot, Chimp.

There are a series of trials and then the final competition.

First, the robots must drive a utility vehicle down a dirt road, with two small barricades to avoid.

They must exit the vehicle, approach a door and open it. This is when the communication starts degrading. Periodic blackouts occur while the robot is in the "building."

To show their dexterity, the robot will close a series of valves that control airflow in pipes. Three valves must be closed in any order; and the task is complete when all air stops flowing. The handles have a diameter between 4 inches and 16 inches. The valves open by counter-clockwise rotation. This particular task would have been instrumental at the Fukushima nuclear plant.

From there, the robot demonstrates its ability to operate within a catastrophic environment by using a cutting tool to cut a hole in a wall.  A circle was drawn on the wall, approximately 8 inches in diameter. The cutting operation must entirely remove all wall material from the designated circle. Then, there was a surprise manipulation task, which was not disclosed until the finals. This task required manipulation and no mobility.

Next, the robot must navigate different types of terrain. It must cross over a series of ramps and then move through a group of blocks that imitate ground littered with debris. The blocks are unsecured and random so that the robot must prove it can deal with a shifting terrain.

Subsequently, the robot must climb stairs in the finals that have fewer steps and is less steep then the trials. The stairway has a rail on the left side but no rail on the right side.

The details of the tasks were intentionally vague, and the courses changed slightly over the course of the finals in order to prevent teams from just using replay approaches to improve their score on the second run. The idea is to give the teams as much of an experience of an unknown situation, which would be realistic for them to tackle using currently available technology.

I wouldn't say that these trials were boring, but watching these robots in action closely resembled watching a pot boil.  We would expect the robots to run, jump and talk. The fact is, they're dumb—really dumb and slow. This is why DARPA holds these competitions, focusing in on semi-autonomous movement.

To make robots useful to first responders, they must be able to pick up and use a tool, turn a valve, and climb a ladder or stairs.  The DRC is necessary to find ways where robots can be helpful in keeping humans out of danger.

The 2015 competition got lots of press coverage and taking first place and the $2 million in prize money that goes with it was Team Kaist of Daejeon, Republic of Korea, and its robot DRC-Hubo. Here are some videos of that robot and a few that didn't make it.

Posted by Ulrica Marshall on 01/25/16, 04:56 AM
Hi Len, This might interest you. Erle Robotics unveiled in the DARPA Robotics Fast Track, the Hardware Robot Operating System (H-ROS). Erle Robotics SL has been funded by the US Defence Advanced Research Projects Agency (DARPA) to its coveted Robotics Fast Track (RFT) program: Its mission will be to develop the Hardware Robot Operating System (H-ROS), a project that will create easily reusable and reconfigurable robot hardware components, providing a game-changing and homogenous platform for manufacturers and users. In line with DARPA’s goal to revolutionise robotics technologies by promoting cost-efficient and non-traditional approaches, Erle’s H-ROS project aims to significantly simplify the creation of robots, reduce development time and bringing the capacity to construct and repair robots to a wide audience. The RFT program is sponsored and funded by DARPA, one of the most relevant forces in global advanced robotics technology and an agency of the US Department of Defence. RFT seeks to enable rapid, cost-effective development of new robotics capabilities designed to respond to, and even anticipate, quickly evolving needs in space maritime, ground and air operations. Erle Robotics SL, of Spain, was the only non-US company out of the eight organisations selected so far by DARPA. If you would like more information about our Robotics startup for an in depth article please let me know global-pr@erlerobotics.com Thanks Ulrica