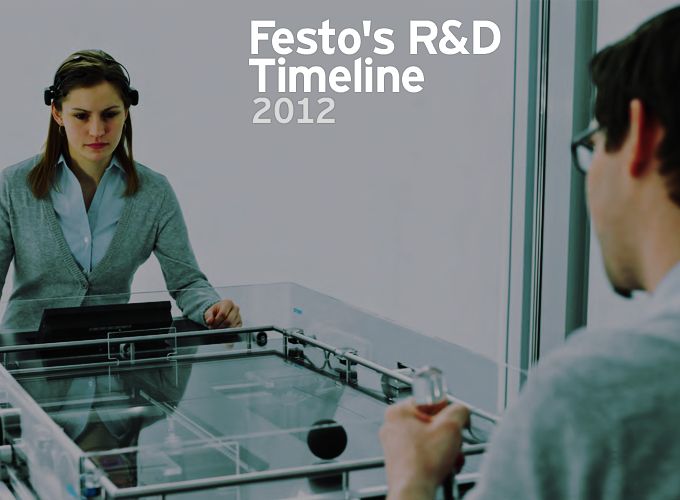 Cont'd from part one, part two and part three.

With the aid of the ExoHand, the individual fingers can be moved and their strength is thereby reinforced. Conversely, the exoskeleton can also mimic the movements of the hand and transfer them in real-time to the robot’s hands. By means of force feedback, the person feels what the robot is gripping. This means that the human sense of touch can also be made use of across large distances and can even be applied at the interface between the real and virtual worlds... (more)

The two players use linear axes as bats, with the ball being kept in motion by tilting the board. By means of a brain-computer interface (BCI), one player uses only his power of thought to control the bat. On the other side is a second player, who uses his muscle power to operate a lever that moves his own bat... (more)

The shape of this flying object is based on the geometrical band devised by Paul Schatz: its middle section, in the form of an articulated ring of six members, detaches itself from a cube and constantly turns inside-out, taking on different geometrical shapes in the process.

With the geometrical band Schatz discovered that the principle of kinematics, which until then had been based on rotation and translation (linear motion), could be extended by a further mode: inversion. With SmartInversion, the engineers and designers are now investigating where and how geometrical inversion can be put to use in technology... (more)

The NanoForceGripper enables especially delicate objects with smooth surfaces, such as drinking glasses or display modules, to be gripped using practically no energy. This is accomplished by placing a film on the underneath of the gripper, which is based on the sole of a natural gecko. It adheres securely and permanently to the surface of the item being handled, without energy being required... (more)