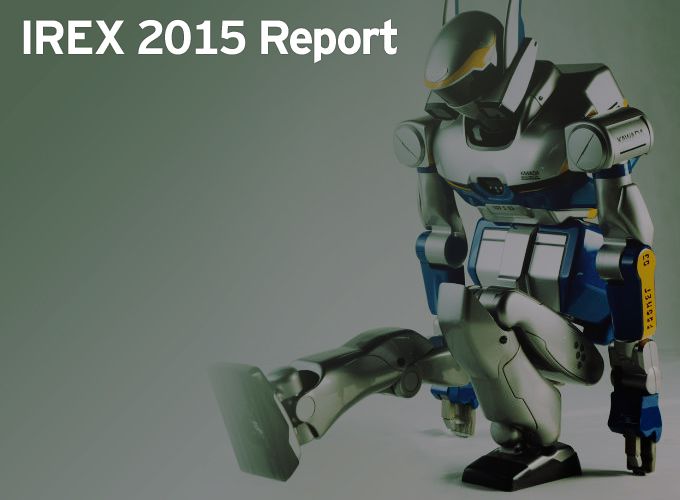 Close to 500 firms were exhibiting their products at the event, its biggest in its roughly 40 year history. Robot firefighters drew huge crowds to watch a demonstration where they checked for fire and turned on a sprinkler system in a simulation how a robot would work in the aftermath of a disaster. They've been designed by one of Japan's largest public research institutions, the New Energy and Industrial Development Organization, or NEDO, which was established in the wake of Japan's 2011 earthquake, Tsunami and nuclear meltdown.

During the demonstrations by NEDO, one of the country’s largest public research organizations, visitors were awed as the HRP-2 Kai life-size humanoid robot walked along on a narrow path and opened a door to check for a fire while another life-size robot, Jaxon, walked and turned a sprinkler valve to extinguish the blaze. The head of NEDO's robot division says there're still come issues with balancing for humanoid robots, but he tells his organization's hoping that future upgrades will mean--- in as little as five years --- the new disaster-relief robots could be in commercial use. There're also robotics designed for a nursing care environment, like the Muscle Suit, a kind of exo-skeleton which allows users to life heavy weights more easily.

Using robots to probe disaster sites is a challenge the global robot industry is currently working to tackle, said project coordinator with the robot and machinery system technology department at NEDO, a Kawasaki-based semi-public body in charge of developing new technologies and energy. Robots would have been indispensable in the aftermath of disasters like the devastating 3/11 earthquake and tsunami — especially in quake-prone Japan — as well as in more recent accidents like tunnel collapses. When such disasters occur, “there are places where humans can’t physically go,” That’s where robots come in to reduce the risks of disasters.

The event also highlighted robot tech for nursing care, including remote monitoring systems and exoskeleton suits that aid those with limited mobility. But while the nursing care tech sector is likely to grow as Japan grays, Hiroshi Kobayashi, director of Innophys Co., a Tokyo-based venture affiliated with Tokyo University of Science, believes the industry remains quite conservative. Because of this attitude, employing these new technologies will take time at many nursing-care facilities, said Kobayashi, whose firm sells a robotics product called the Muscle Suit that enables wearers to more easily lift heavy objects.

Meanwhile, robots like SoftBank’s emotion-reading Pepper and Sharp’s robot-designed phone RoBoHon, have also been a hit at the venue, and with some attendees pointing out that these robots are likely to be a boon for makers. “The market for smart robots will be getting bigger and bigger,” said Taki Sakai, president of Unirbot, the Tokyo-based firm behind Unibo, a small white robot with a liquid-crystal display screen on its head. The robot can recognize individuals’ faces, chat with them and act as a personal assistant.

Furthermore, the advantages of robots were also stressed in the exhibition such as cost reduction. No longer just the fantasy creatures of science fiction, robots now have the potential to reduce costs and improve customer experiences while working alongside (or even in some cases replacing) humans. Of course robots have been part of the factory shopfloor, car assembly line and space exploration industry for years, but until recently robots have not turned out to be nearly as intelligently evolved (or financially viable) as had once been hoped. Fully autonomous robots only appeared in the second half of the 20th century with the first digitally operated and programmable robot, the Unimate, being installed at General Motors in 1961, but now things seem to be moving quickly.

Also, hospitality. Evidence of what they can and can’t do is growing. For example, in Japan, a hotel partially staffed by robots has just opened at the Dutch-themed Huis Ten Bosch theme park in Nagasaki. The Henn Na Hotel has 10 robots resembling multilingual humans who greet guests upon arrival and usher them to reception, while other more minimal robots serve coffee, carry luggage up to the rooms, entertain guests and perform general concierge duties. The hotel insists that the robots are not just a gimmick, but a genuine technological attempt to deal with the ageing Japanese population (25.9% of whom are currently aged 65 or above) and the resulting reduction in size of the workforce. (Patrons will be reassured to know however that real human beings are still in charge of security).

And also, NAO. The Japanese banking sector, in the shape of the Bank of Tokyo-Mitsubishi UFJ also took a first step towards employing non-human staff earlier this year with the introduction of a customer service humanoid robot at its flagship Tokyo branch. The robot, called Nao (currently the most-sold humanoid research and educational robot in the world) speaks 19 languages, can answer basic questions and – crucially – can analyse customers’ facial expressions and behaviour. Standing 58cm (23”) tall and weighing 5.4 kg (11.9 lb), Nao works in the reception area and the bank hopes that it will be especially popular with foreign visitors during the 2020 Tokyo Olympics.

According to Japan’s Ministry of Economy, Trade and Industry, Japan is anticipating a tenfold increase in the market of robots and robot technology by 2035. And it’s not just in assisting and information-giving roles; the idea of using robotics to care for the elderly is also being trialled everywhere from Singapore to Salford. It’s a simple way of freeing up staff time for the more hard-to-replicate human interaction for instance by tasking robots with carrying trays and checking defibrillators are always present and in the right place. Further more ,emotionally responsive robots were also a big hit at the event, with one executive saying; the market for smart robots will be getting bigger and bigger.