Robotics and automation in the office is actually much more subtle, and typically works behind the scenes. 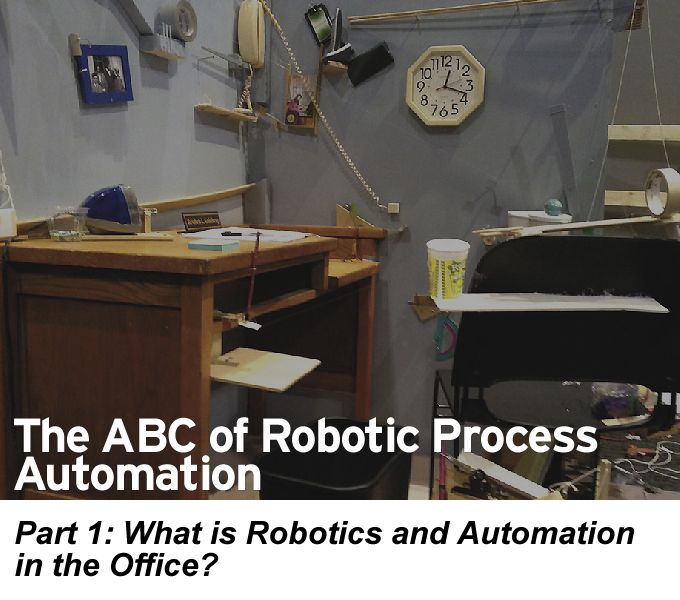 When many people think of robotics and automation in the office, they imagine being greeted by a humanoid robot receptionist, or a C3PO-like robot ushering them into the meeting room with their client’s coffee order. The reality, however, is that while robotic office assistants are a possibility, robotics and automation in the office is actually much more subtle, and typically works behind the scenes. 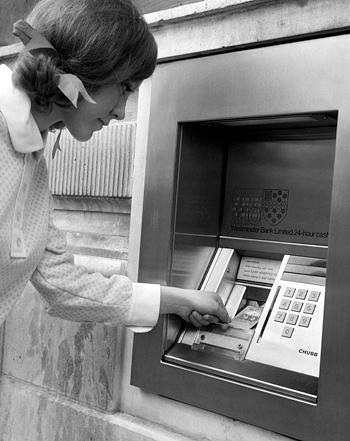 Evolution of robots from the plant floor to the office

When robots first entered into the workplace alongside humans, it was on the factory floor. The earliest industrial robot was a crane-like device built almost entirely from Meccano parts, and powered by a single electric motor. A more advanced version of these robots joined the workforce at a General Motors plant in 1961, where they performed laborious, industrial tasks, like welding, assembly, painting and pick and place. These early robots always worked autonomously, without human interaction, as their inventors, George Deyol and Joseph Engelberger, deemed them too dangerous to work alongside people.

In the mid 60’s, researchers and engineers at IBM began working on robotic devices at the Mohansic, N.Y., laboratory of the IBM Advanced Systems Development Division. By 1973, IBM had released their first robot and had developed software for it. The real transition from plant floor to the office, however, arrived in 1969, in the form of the first Automated Teller Machines (ATMs). The installation of the first ATMs marked the beginning of the transition towards digital banking, changing what was previously an in house, clerical service into a service that is available 24/7.

The banking industry is a prime candidate for robotic process automation, as it performs a lot of routine, repetitive tasks, and processes huge volumes of data on a daily basis. The insurance and utilities industries also lend themselves towards automation, which can reduce costs and deliver greater customer satisfaction. Yet RPA is not industry specific, it can be applied across departments, from finance and operations to HR and customer service.

So, if office robots are neither humanoid assistants, nor the kinds of robots working on the plant floor, what are they?

Robotic process automation is the application of technology that allows employees in a company to configure ‘software robots’ to capture and interpret existing applications for processing a transaction, manipulating data, triggering responses and communicating with other digital systems.

The type of robots deployed in an office environments are typically ‘software robots’. While they are still robots, we use this term to separate them from the physical, humanoid or factory robots, and identify them as computer based systems.

A software robot is a software application that uses the user interface of a computer system to replicate the actions of a human being. Software robots are configured using demonstrative steps, rather than being programmed using code-based instructions. This means that business operations employees with no programming experience can be trained to automate operational, back office processes using RPA tools within a short time frame.

RPA software platforms are non-disruptive, so they do not interfere with any other IT systems. Software robots can access end user computer systems in the same way a human does, via the user interface with an established access control mechanism, ie. Username and password, therefore no underlying systems programming is required.

Where can I go to get examples similar to my work environment which I can relate to? 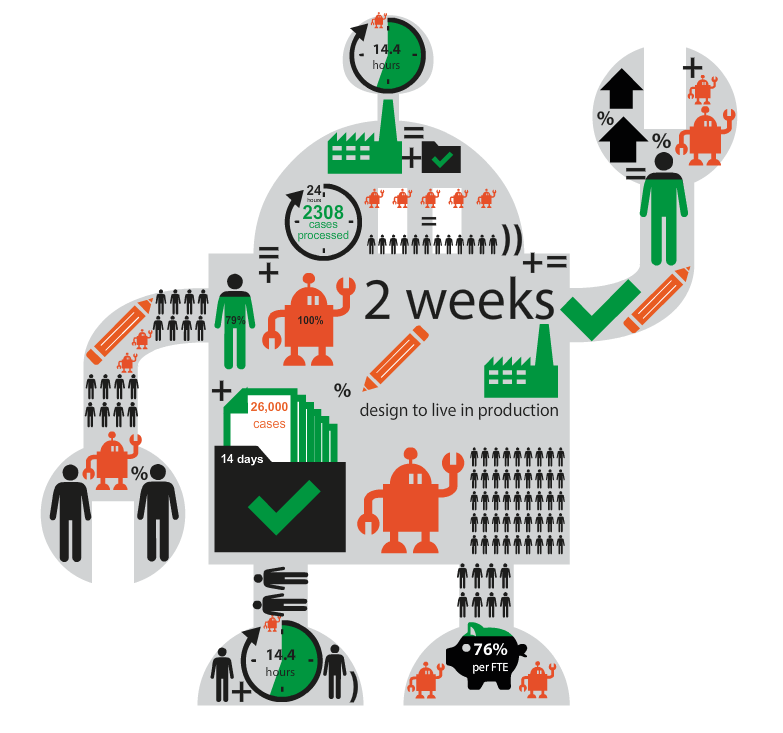 Robotics process automation is still new territory for many organizations, and it’s important to understand where it can be applied to, and benefit your business before embarking on a full evaluation. The best way to gauge how RPA could work for you and your business is to look at existing case studies. At Genfour, we encourage our customers to share the immediate benefits for RPA – they come quickly and are quite tangible.

This graphic captures just a few of these but as active participants in RPA, it is our job to share what our pioneer customers are achieving by implementing robotics. The additional challenge is that many organizations do not want to talk about automating their processes and switching the workload from humans to robots.

Again, this is another perception that needs changing. Many of our customers experience huge relief when their robots have been installed. Case in point, recently, one of our customer teams held a ‘Welcome the Robots’ party. They celebrated their new robotic friends with robot bunting, signs, gift boxes and marshmallows. “The reason everyone was so excited was that the team could see how the robots will really add value to the operation, relieve daily pressure and improve a quality delivery to the customer,” said the company’s Head of Operations.

Can a robot be a solution for IT projects rejected due to unacceptable payback?

RPA is a more cost effective alternative to traditional IT initiatives, and is quick to achieve a return on investment, providing an average payback time of 3-9 months. RPA is IT system and process agnostic, so there is no additional cost to ensure that your existing IT system is compatible. After the initial investment, implementing RPA is inflation-agnostic, allowing your organization to do more, for less.

Our next in the RPA ABC series will look at the opportunities for automation, and what robots can and can’t do.