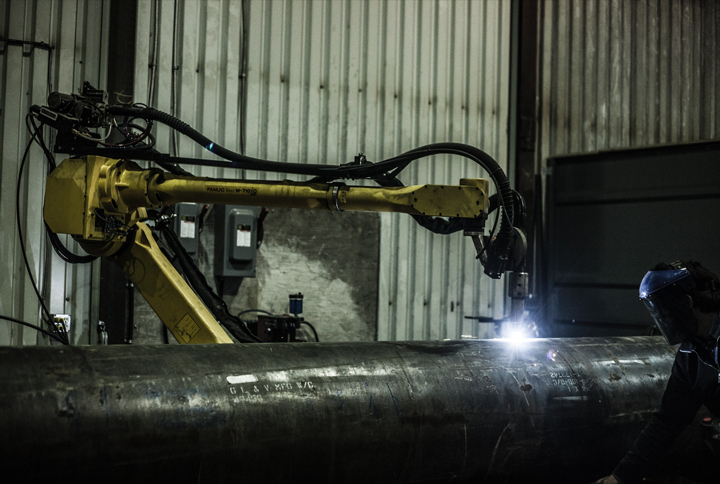 Groupe Gravel, a Quebec-based machining and metalwork fabricator is a family business with 40 years experience, offering one stop service for custom production and repair services. In the last 5 years, it has been growing, delivering President, Laurent Gravel’s vision of an integrated turn-key service offering from parts optimization by in-house design engineering and reverse engineering through production by welding, cutting, machining with full testing and quality control and finally to offsite installation and repair services. It has grown from a 1000 ft² to a 20,000 ft² shop and to employ 30 people. Groupe Gravel’s customers are most often in need of a single unit, a custom part for a single project, the replacement, improvement, or repair of an existing part. A production run is most often one unit, rarely more than ten.

In 2013, Laurent Gravel, decided that he needed to make his cutting and welding operation as precise and efficient as his CNC machining shop. Gravel had experience working in CNC but was looking to capitalize on capabilities related to cutting and welding for small batch production. Both precision and quality were crucial to the shop and getting it right the first time with a minimum number of operation and handling was extremely important. That meant that speed, accuracy, and programming as well as production, were factors which needed to be carefully taken into consideration. Groupe Gravel gave themselves 2 years to install a robot work cell that could perform plasma cutting and welding on large work pieces. With no prior robot experience, Gravel was convinced the robot work cell would provide a faster response time with greater precision and quality in meeting production requirements.

To accommodate arc welding on large work pieces, Groupe Gravel selected a FANUC M-710 ic 20L long-arm robot offering a 10-foot reach. The robot was integrated with an ESAB SP-150 PLASMARC plasma cutting system and a Lincoln Electric Power Wave 455M robotic arc welding package. Although the robot was equipped with a long reach, rotary positioners were required to enable cutting and welding for large tubular parts handled by Groupe Gravel. Six months after the initial robot installation, a 2-axis positioner with a half ton payload capacity was added. 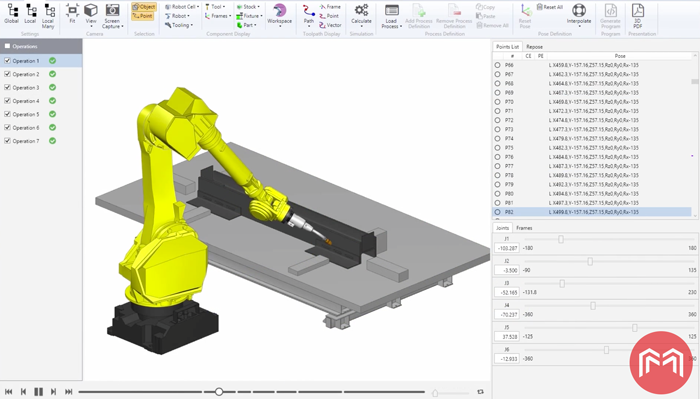 Interactive simulation allows operators to use graphical interfaces to control the path, gun side tilt, push/pull angles, and other path and point-specific settings.

Robotmaster’s personalized professional training program had Laurent and his team programming their robot with the Robotmaster cutting & welding package after only 5 days of training. The Robotmaster tools enabled quick path creation from the CAD model and automatically set optimal tool orientations for cutting or welding. Robotmaster’s interactive simulation environment permitted Gravel’s plasma cutting experts to have the human touch, supplementing the automation with their technical knowhow and acquired expertise. Their natural and efficient manual intervention using easy graphical interfaces allowed for optimized control of the path, gun side tilt, push pull angles, and other path and point specific settings. 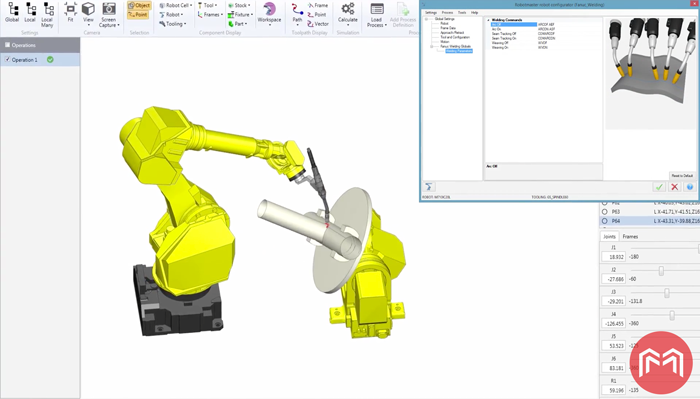 For Groupe Gravel, the automated creation of cutting and welding paths and control of gun orientations, improved part quality and drastically reduced programming time. The Robotmaster applications team, the robot integrator, Avant-Garde Technologies (AGT), and Groupe Gravel worked together to create process streams customized specifically for the programming of complex arc welding parameters. Screens were provided, for control of the weld start and end commands, for selection of the welding schedule number, and for controlling weaving and seam tracking. When Gravel added a 2-axis rotary positioner, coordinating the rotary axis to the robot motion added a new level of complexity to programming. Robotmaster’s rotary axis management tools enabled Groupe Gravel to program in either fixed indexing mode or as simultaneous 7 and 8 axis motion and to integrate the robot and rotary axis control for optimized resolution of reach, singularity, collisions, and joint limitations. 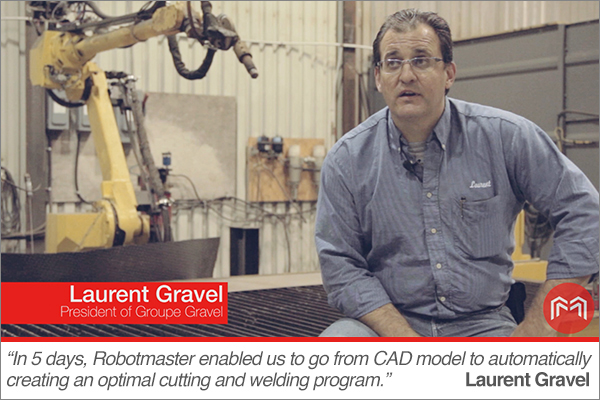 To remain competitive, manufacturing environments are rapidly adopting robots to run their production lines. With a fully integrated programming software such as Robotmaster, manufacturers can easily incorporate the technology into a robotic application.

Offline Robot Programming (OLP) takes the programming “offline” – away from the teach pendent / robot cell – allowing the user to generate the robotic code from their computer without having to take the robot out of production to generate it.