At a high-level, what is Intera 5?

By simplifying system integrations, Intera 5 allows manufacturers to deploy full work cell automation in a matter of hours, not weeks. Intera 5 is paving the way for smart manufacturing and is helping companies build factories of the future.

This new software is the first of its kind to connect all of your devices from a single controller, which extends the smart, flexible power of our robots to the entire work cell and provides unparalleled speed to deployment. It’s also a gateway to the industrial internet of things (IIoT), driving value from smart robots across a production cell.

Why is Rethink Robotics introducing Intera 5?

The manufacturing world is nearing an inflection point and technologies are converging to reshape how factories operate, connect and learn. Many manufacturers are currently caught at a standstill between innovation and practical deployment and are feeling the pressure of the “innovate or die” message that is changing the industry. While the promise of next-generation technologies is exciting, these solutions tend to require wholesale changes to existing factory infrastructure.

We’re delivering on the promise of a new manufacturing system that can “sense and respond” and quickly accommodate change and variation in the work cell. For too long, manufacturers have been stuck with inflexible automation that takes hundreds of hours to deploy and alter, and we’ve set out to change that.

How will this help manufacturers in the short term?

In the short term, Intera 5 will help manufacturers increase quality, productivity, and profitability in their operations. By implementing Intera 5, manufacturers will have unprecedented orchestration of the work cell, greatly reducing the need for complex, time-consuming, and outdated automation options. The software will allow robots, traditional industrial machines, conveyors, and other factory equipment to seamlessly work together for improved efficiency.

How does this bring smart manufacturing and the IIoT into play?

The whole notion of a smart factory has been prominent in the manufacturing industry for years, however up until now it has merely been a futuristic vision for tomorrow. Intera 5 is opening the door to advanced automation by extending its software platform beyond the robot and simultaneously reducing friction from deployments. Intera 5 allows for a single source of control for the work cell, devices, and robots, which closes the loop between data aggregation, analysis and execution, paving the way for fully integrated IIoT.

What is the history of the Intera software platform and how do manufacturers deploy Intera 5?

Since its inception, Intera has been the industry’s best and most intuitive software platform that is used to control and train robots to perform tasks.

With continual updates and advancements, the platform enhanced the value of automation investments with key features and functionality added. Intera is an evolving platform and a robot can be easily updated to the latest version. All Sawyer robots will be equipped with Intera 5, allowing manufacturers to orchestrate robots, traditional automation and existing devices faster than before.

Can you give us an outline of the equipment and modifications required to implement Intera 5 in an existing plant?

Intera 5 simplifies traditional system integration by allowing manufacturers to deploy full work cell automation in a matter of hours, not weeks. All Sawyer robots will be equipped with Intera 5, allowing manufacturers to orchestrate robots, traditional automation and existing devices like conveyors faster than ever before. Sawyer’s embedded vision, force behavior and force sensitivity features allow manufacturers to deploy the robot in an existing plant or work cell without needing to modify the environment to suit the robot – essentially, it’s a plug-and-play solution.

Unlike most of the automation solutions currently on the market, Intera 5 allows our customers to deploy robots with the equipment they already have, allowing companies to deploy more automation, more quickly and enable the ability to switch a robot from task to task.

Can the system be integrated with other equipment and systems already in operation?

Intera 5 streamlines deployments by integrating with existing fixtures and equipment. By removing unnecessary friction from deploying robots in the work cell, Intera 5 allows manufacturers to drive innovation without requiring massive changes to their operations, or incurring associated costs. With the ability to connect and coordinate a work cell, Rethink Robotics’ Sawyer is providing the gateway for incorporating the industrial internet of things (IIoT) into the factory in a meaningful way. 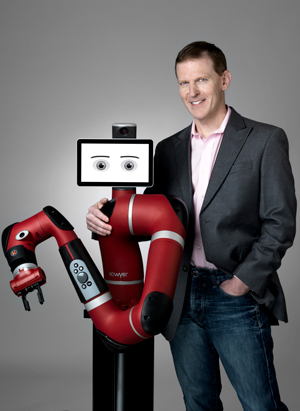 About Jim Lawton, Chief Product and Marketing Officer, Rethink Robotics
From his early days at HP, Jim has built his career on finding better ways for manufacturers to succeed. During his years in the manufacturing community, Jim saw enormous untapped potential for robotics in manufacturing, which led him to the role of chief product and marketing officer with Rethink Robotics.  Jim’s manufacturing and supply chain expertise is vital to helping Rethink simplify and redefine automation. Prior to Rethink Robotics, he was an executive at Dun & Bradstreet leading an innovative new data and analytics business unit on track to deliver several hundred million in revenue. Jim writes a Forbes column dedicated to innovation in manufacturing, and he has spoken at numerous industry conferences, including IndustryWeek Best Plants, RoboBusiness, CES, SXSW and more. Jim has appeared in news outlets that include Bloomberg TV, Reuters, Harvard Business Review and the Associated Press.

Getting the Right Grip: Designing Soft and Sensitive Robotic Fingers