If researchers can use implanted BCIs to allow people to bypass their muscles, indeed, if these scientists can find a cost-effective, reliable way to work around a damaged or compromised nervous system, people suffering paraplegia, amputation, multiple sclerosis, Lou Gehrig's, and a host of other diseases that rob them of their independence, may soon find that the frustrations of daily life are lessened.

Neurotechnology and the Future of Hope

Bill Kochevar wears a bright red shirt and what looks like a cast on his right arm. As he raises a fork to his mouth, his movements are awkward and slow, supported by a gravity defying brace mounted on the floor next to his wheelchair.

He’s got a fork full of mashed potatoes, and as he raises it to his mouth, the joy on his face is unmistakable.

“It was amazing...I thought about moving my arm and it did!”

That may seem unremarkable to you, but since a bicycle collision with a mail truck, Kochevar has been paralysed from the neck down.

It’s the stuff of nightmares--wanting to flee and finding your legs rooted in place, unresponsive.

And we’ve all slept on an arm for long enough to render it dead. Think about that experience now. When you woke up, your limb was just meat, just dead weight that wouldn’t move at your beck and call as it should.

Now imagine knowing that no amount of waiting will summon the pins and needles that mean your arm is coming back from the dead, that instead, it’ll hang lifeless at your side for the rest of your life, and that far from being indispensably useful, you’ll instead spend every waking moment trying to compensate for this new obstacle, adjusting everything you do from brushing your teeth to driving a car to typing at work--if, indeed, you can work.

Now extend that to multiple limbs or remove them altogether.

You can start to see what it’s like to live in a body that refuses to cooperate.

Paralysis affects far more people than you might realise. For instance, the Reeve Foundation recently found that 1 in 50 Americans struggle with paralysis caused by stroke, spinal injury, and muscular sclerosis. Nearly a majority are unable to work, a staggering 41.8%.

For them, independence is a dream, something they might remember but no longer experience. But now, advances in neurotech may help them live fuller, more self-sufficient lives.

Mind-controlled wheelchairs and the next step

To help those who’ve suffered a profound loss of motor control, researchers have been exploring mind-controlled wheelchairs. Rodrigo Quevedo, a Chilean engineer, has developed a design in his ‘Idea factory.’ His motivating passion, he says, “is to do something so [paraplegics] can move.” Rodrigo’s current designs steer the chair by subtle head movements, but he’s hoping to make the move to neural control soon.

Diwakar Vaish beat Rodrigo to the punch. This young Indian tech guru has developed the first commercially available wheelchair that features a brain computer interface (BCI). The user need only wear a headset that collects information from her brain’s electrical impulses, the neural storm that accompanies thought. The BCI translates these minute electrical signals into a language a computer can understand, something like a sophisticated google translate of thoughts. Now that the computer can grasp what a particular thought looks like, it can react and obey. 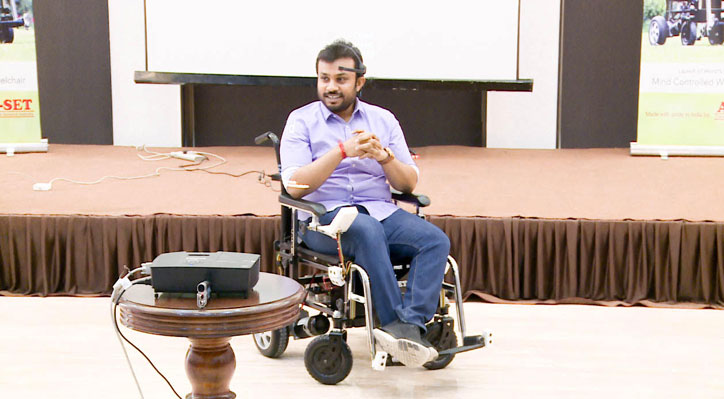 In Vaish’s system, the non-invasive headset connects the user’s brain to the chair via Bluetooth, and augmented by proximity and terrain sensors, this has allowed even the most stricken patients a measure of autonomy. All that’s demanded of the user is a healthy brain, so even those trapped by Locked-in Syndrome can use the new chair. As Vaish told The Sunday Guardian, “We have tried it on patients who are in a vegetative state, but their brain is functional and it was successful.”

The next steps are to move beyond motorised chairs and into the world of exoskeletons. Miguel Nicolelis, a Brazilian neuroscientist, has been working together with colleagues at Duke University as part of the Walk Again Project to design a wireless system that allows control of a wheelchair with thought alone. By implanting a tiny BCI in the brain of two rhesus monkeys, chosen for their similarity to human beings, they were able to demonstrate that it could control the movements of the chair. He’s pursuing this method because, as he explained to the Mirror, “In some severely disabled people, even blinking is not possible. For them, using a wheelchair or device controlled by non invasive measures like an EEG, a device that monitors brain waves through electrodes on the scalp, may not be sufficient.” To provide the control they need, invasive measures are necessary.

Nicolelis’ goal, then, isn’t to duplicate Vaish’s design. Instead, he wants eventually to develop robotic exoskeletons that are nothing less than an extension of their users mind, a dream he thinks is within reach given the data from these early experiments. For his test monkeys, the chair became something more than a means to get from one place to another; in fact, “the wheelchair is being assimilated by the monkey’s brain as an extension of its bodily representation of itself.” If Nicolelis is right, he might be taking the first steps toward real mobility for paraplegics and others with profound motor impairment. “We are not focused on the wheelchair,” he promises.

Until now, if you lost an arm--but still had enough of one to be fitted for a prosthesis--doctors could fit you with an artificial arm that you could learn to control by moving the muscles left in your stump. These cumbersome systems are hobbled on a lot of these “ifs:” if the patient has enough remaining tissue, if the tissue still allows muscle movement, if the prosthetic arm can work well enough outside the lab.

These “ifs” fall on patient’s live like a thick blanket of snow, quickly obscuring the way forward. That’s why as many as half of these patients find their new arms collecting dust.

But scientists are well aware of these technological limitations, and their working to overcome them. One example of promising research comes from Johns Hopkins. Working with an epilepsy patient who needed his brain ‘mapped’ to help him combat his seizures, a process wherein doctors implant tiny electrodes to stimulate the brain at precise--and unique--points, a research team led by Nathan Crone was able to implant a tiny BCI as well. 128 sensors in an areas about the size of a credit card were attached to the part of the man’s brain that controls the arm and hand. After mapping exactly how the patient’s brain worked with a special glove, this interface allowed the Hopkins team to bypass the patient’s body and use only his thoughts to control the individual fingers of a robotic hand.

Initial results were promising; after mapping his brain, the test patient was able to control the robotic hand with 76% accuracy. By refining the control of the prosthesis--pairing the ring and pinky fingers together, that number rose to 88%. That’s no small feat!

The advantage of a system like this is not only that it can allow functional independence to people who had given up on caring for themselves, but also that it isn’t ‘artificial.’ Patients need merely think about what they want to do--and the artificial limb, chair, or robotic appendage does what it’s supposed to do. Case Western Reserve University is experimenting with implanted BCIs that have returned a measure of control to Kochevar. Now able to feed himself, hold a cup, and manipulate a fork, he explains, “I think about what I want to do and the system does it for me. It’s not a lot of thinking about it. When I want to do something, my brain does what it does.” The researchers working with him think this is only the beginning.

“With further development, we believe the technology could give more accurate control, allowing a wider range of actions, which could begin to transform the lives of people living with paralysis,” Bolu Ajiboye, the lead scientist for this study told The Guardian.

Ajiboye’s optimism is bolstered by the success of patients like Kochevar, who can slowly raise a mug to his lips and drink from a straw. For someone with quadriplegia to gain even this limited mobility is life-changing, and this advance charts the course for future innovations and provides powerful new tools to help those in need.

If researchers can use implanted BCIs to allow people to bypass their muscles, indeed, if these scientists can find a cost-effective, reliable way to work around a damaged or compromised nervous system, people suffering paraplegia, amputation, multiple sclerosis, Lou Gehrig's, and a host of other diseases that rob them of their independence, may soon find that the frustrations of daily life are lessened. For futurists and trendwatchers, the promise is clear.

This new breed of BCI, powered by advances in neuroscience, isn’t just technology.