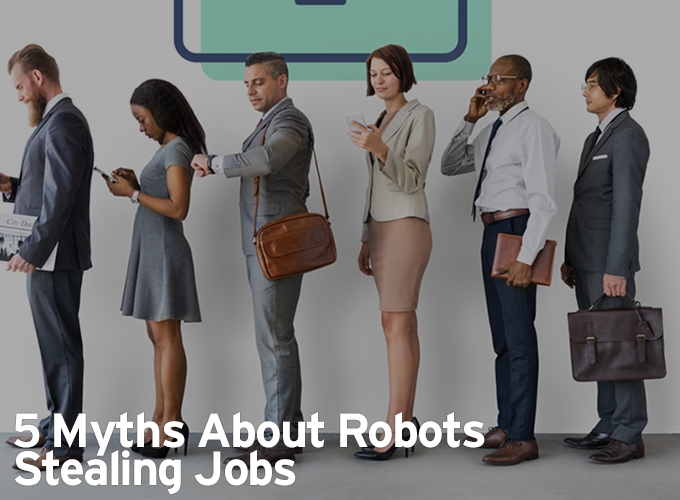 Robots can perform an increasing number of the tasks that humans can’t, and bots can be found in customer service, transportation, manufacturing and more. According to one study, automation could result in the loss of 800 million jobs.

Other recent reports, though, suggest the future may not be so bleak. Technology taking jobs, they say, is not the end of the story.

There are a lot of myths and, admittedly, uncertainties surrounding robots and the job market. Here are a few of them.

1. Job Displacement Due to Automation Is New

The media often treats this issue as if it was entirely unprecedented, but, in reality, it's happened many times before. New technologies, including automation, have displaced workers for years.

There are many examples of this. Elevator operators lost their jobs once technology enabled people to operate them with the push of a button. ATMs took over the task of dispensing money for bank tellers.

Economies continuously change, due in part to technological advancements. When a new idea comes along and replaces an old one or makes it more efficient, the economy shifts.

2. Robots Cause a Net Job Loss

One of the central misconceptions underpinning the myth of robots taking jobs is that job displacement is permanent, or that it will cause a net job loss.

Four out of every five Americans worked on farms in 1800. Today, just one in 50 do. If job loss were permanent, unemployment would be astronomically high. We'd also see cashiers from video rental stores out on the streets. Instead, these workers found new jobs, possibly in new sectors.

It’s a generally accepted economic theory that when technology eliminates jobs, it creates gains in efficiency, which ultimately leads to the creation of more jobs than were lost. The money that the tech saves companies goes back into the hands of consumers, workers and shareholders, stimulating economic growth.

Economics researchers recently tested this idea. They looked at 19 advanced economies from 1970 and 2007 and found that the theory held true.

Some fear that robots will lower the demand for human workers, thereby reducing wages. One recent study of 17 economies found that robots reduced the hours of workers in lower-skilled jobs but not the total hours that humans worked. It also found that they enabled an increase in wages.

This means that the introduction of robotics could reduce the hours and potentially the wages of lower-skilled workers. On the other hand, it could free up those workers to do other, more skilled jobs. The study also supports the idea that the job market shifts rather than shrinks.

One problem that gets in the way of this healthy shift is the skills gap, an issue in which workers don’t have the skills to fill open positions, as technology takes over unskilled labor. To deal with this problem, we need to invest in training for these workers.

At the level that technology is now and will be for the foreseeable future, robots can’t take over every aspect of most jobs.

Manufacturing work, for example, is typically cited as subject to automation. Even when factories introduce robots, though, human workers still often need to do part of the work. Robots may place engine blocks, but humans often need to install the small bolts and fasteners. Humans also need to oversee operations and check for quality issues.

Some aspects, at least at this point, are completely out of the range of robots such as creativity and social and emotional intelligence.

5. A Robot Takeover Is Imminent

It might feel like the robot takeover is already almost here. While we see more and more advanced automation, that has happened for centuries, and the robots haven't taken over yet.

In fact, robots still struggle to do some surprisingly basic tasks, especially when roaming free in a world full of innumerable variables. Picking up objects, for instance, is an enduring challenge.

We certainly won’t see a robot takeover happen overnight. It’s a gradual shift, which gives the economy and society some time to adjust.

Robots are becoming more common and more advanced, and while they will eliminate some jobs, they will also create them. It's important to remember that although technological advancement may cause some unwanted changes, it has occurred for as long as humans have been around and, when appropriately managed, brings more benefits than harm.

Conveyors for AMRs are an Effective Way to Automate a Facility

This eBook covers Glide-Line's conveyor attachments built specifically for AMRs. We go through the many variables that integrators are looking for in a cost-efficient AMR conveyor design, like: - lightweight, yet powerful - high flexibility & configurable -durability & dependability - DC-driven. At Glide-Line we solve problems that other conveyor manufacturers won't: simplicity - easy to maintain,flexible configurability, creating an efficient, hassle-free customer experience - customizations are normal to meet your needs.
More Products
Feature Your Product