The most recent prosthetics can stimulate the nerves so that when a person comes in contact with something, they feel sensation with help from electrical impulses. 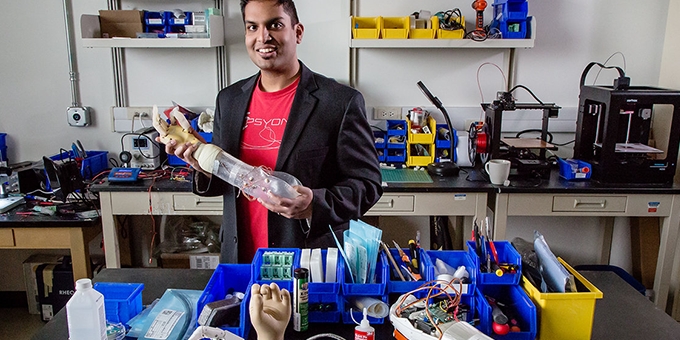 Modern prosthetic limbs have come a very long way. The earliest ones merely provided rudimentary facsimiles of limbs. The most recent prosthetics, however, can stimulate the nerves so that when a person comes in contact with something, they feel sensation with help from electrical impulses.

The amount of feedback varies depending on the amount of pressure exerted. If a person only touches something lightly, they get mild feedback. A harder touch increases what they feel.

Unfortunately, the prosthetic arms that offer such haptic feedback do have limitations. When wearers engage in activities that make them sweat, the electrodes providing the input may peel away and make it progressively harder for people to feel the feedback. In the worst cases, an electrical charge buildup forms and gives painful shocks to the area that still has contact with the electrode.

With those shortcomings in mind, researchers came up with an external component and an associated controller algorithm that detects the amount of stimulation a user feels and provides a steady amount of feedback even through activities that cause exertion.

Cost can be a factor that restricts people from getting the kind of prosthetics that help them live their best lives, such as those that offer sensation. However, the company involved in this new research wants to make its prosthetic arms covered by insurance premiums with no-out-of-pocket costs to consumers.

Testing Out the New Prosthetics

The research team recruited two volunteers to try out the high-tech prosthetics. In tests, they progressively cut back on the amount of adherence of the electrode to the skin. In response, the controller algorithm decreased the amount of current provided, ensuring the patients did not receive painful shocks but still felt consistent feedback. The controller kept working until the electrodes were 75 percent detached.

Patients also worked out on exercise equipment and hammered nails into boards while wearing the controller algorithm. The sweat caused by those tasks didn’t adversely affect the consistent sensation felt by the users.

The abstract from the research paper published about the prosthetics concluded that the controller could regulate sensation intensity after large changes in impedance. It also mentioned that the scientists found that their findings remained constant even when applying variables associated with the participants or conditions.

How Could This Development Change Medical Research?

The researchers received support from the National Institutes of Health and the National Science Foundation during their experiments. They want to make prosthetics more like bodily extensions than merely “tools” people use.

If the team ultimately figures out how to produce their controller modules at low costs, that achievement could open up possibilities for both robotics and the medical realm. People could be understandably reluctant to invest in prosthetics that give haptic feedback if those devices are unreliable and expensive.

However, the early research is promising, especially since it takes care of two previously cited problems with other prosthetic arms.

Any suitable medical device should ideally be so free from problems that it genuinely enhances users lives more than detracts from their quality of life. These prosthetics appear to do that, which could help people get involved in everyday activities without worrying their devices might fail.

The team that created them aims to eventually put the controller module inside the prosthetic instead of making it an exterior component. If that happens, the prosthetics should look more streamlined and be less cumbersome.

Success would also encourage robotics experts to explore using equipment in different ways not considered previously. For example, collaborative robots that work alongside humans and stop moving when people touch them.

It’s a safety feature, and not quite the same as the sensory feedback given by the prosthetics, but the work of this scientific team could spur future developments for robots that respond to or receive tactile feedback.

Thanks to these developments, losing a limb doesn’t mean missing out on the sense of touch.

If the device designers proceed as planned, people could benefit from doing things like holding the hands of their loved ones or gripping mugs filled with their favorite beverages without worrying about device malfunctions.

Then, they could get more out of life.