IDC was briefed to develop a humanoid robot that was capable of typing with fingers like a human to mimic the typing of a user, at a typing speed of 3-4 keys/second. 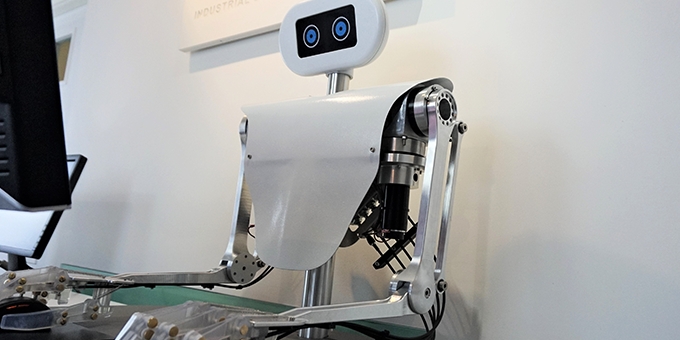 International product design company, IDC (Industrial Design Consultancy), has supported the development of the first robot to type at a computer using fingers like a human.

Working for internet security experts, Garrison, IDC’s brief was to develop a robot for the purpose of demonstrating their cyber security.  Garrison's Silicon Assured Video Isolation technology (Garrison SAVI®) works by browsing the web on the user's behalf, so that if the user visits a site which is unsafe and contains malware, the end user's computing device is fully protected.  Garrison wanted to demonstrate this concept visually by using a robot to represent the secure layer and came to IDC with this in mind.  The plan was for the robot, called RAVI, to be set up in client demos alongside a user typing and browsing the web, with RAVI perfectly copying all that the user did on their keyboard.

IDC was briefed to develop a humanoid robot that was capable of typing with fingers like a human to mimic the typing of a user, at a typing speed of 3-4 keys/second.  The team first did feasibility studies and presented concepts to show what was possible.  Research showed that despite robotics becoming more sophisticated, there were in fact no other robots with a capability for typing with hands like humans.

Garrison wanted the look and feel of the robot to combine high-tech performance with a friendly, humanoid character.  IDC’s industrial designers took inspiration from the human body to create a familiar exterior with human-like features such as a torso, shoulders, arms and hands.  They developed this in combination with open sections showing the inner mechanisms of the machine as it worked.  This struck the right balance for technical demos, with RAVI appearing friendly and approachable while emphasising the latest robotic technology.

IDC’s engineers came up with an innovative configuration of off-the-shelf core components to provide extremely precise mobility in the arms and fingers.  A clever arrangement of bearings and gears in the elbow and shoulder joints meant that RAVI’s range of movement was exceptionally smooth, with zero free play in any joints.  RAVI was constructed from a range of materials and processes including machined aluminium for the main arm components, folded and formed aluminium for the chest plate and SLA printed components for the fingers and head.  These were machined and assembled in IDC’s production unit.

One of the most challenging parts of the development was ensuring the correct forces through the gears and motors to achieve the right typing speed.  Engineering analysis was a key part of this process.  RAVI could have typed at twice the speed necessary, so fine-tuning the mechanism was required to slow the typing to the right speed.  Safety was a crucial part of the development and engineering analysis also provided information about developing a device with safe forces.  To ensure safety in all eventualities, the team created five different safety solutions with physical stops and sensors to detect changes in speed, positioning and power.  There was also an overall ‘stop’ button in case of an emergency.

IDC Director, Simon Collings, who managed the RAVI project commented, “This has been a really exciting project for us to add to our current robotics projects.  RAVI demonstrated just how diverse IDC’s capabilities are; from design and engineering to prototyping, testing and production, we have all the skills in-house.  This also meant we could work to a tight timescale and produced the robot in only 7 months.  Feedback has been great so far and we’re looking forward to developing RAVI 2 shortly.”

About IDC Models
With over 40 years' experience, IDC Models has a long and successful history in the prototyping and model making industry. They provide a full service including 3D printing, CNC machining, vacuum casting, injection moulding and low volume production and an instant online quote service for high accuracy Stereolithography (SLA) parts.