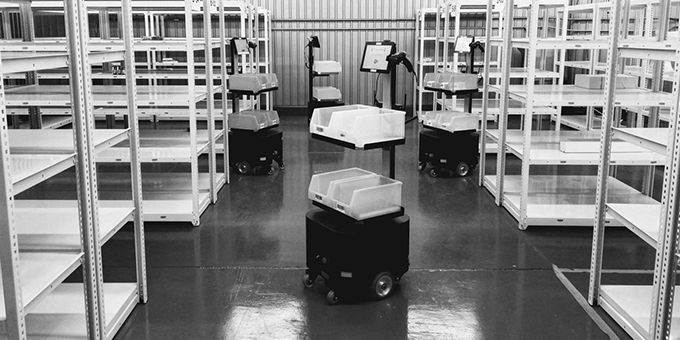 The term “Cloud Robotics” was first coined by James Kuffner, at the time a Google employee, in 2010 [1]. The new concept referred to merging robotics and cloud computing to enable an “extended and shared brain” for robots. The idea was that robots could use this “extended brain” to offload heavy computation to data center servers, then use a “shared brain” to build a common database to collect and organize information about the world (environment) and (robot) skills/behaviors.

Meanwhile, on the other side of the pond (Europe), RoboEarth [2], an EU-funded project from 2010 to 2014, was busy trying to create an “internet for robots.” Ideally, this would be a place where robots could enjoy both a “shared” (via a common knowledge-base) and “extended” ( via servers in the datacenter) brain.

The founding members of what would become Rapyuta Robotics made up the ETH Zurich team of the RoboEarth project. Our partners included six universities and the Dutch electronics giant Philips. For major results on the common database and offloading computation see [3] and [4] and the following videos:

The two sides of the ponds did have some collaborations, e.g., James Kuffner was in RoboEarth’s Industrial Advisory Committee along with Brian Gerky, now OSRF CEO [5].

Where we are coming from

Based on our decade long experience in the field of Cloud Robotics, especially the last four year as a company where we built and helped others build solutions, we think Cloud Robotics should have a broader definition. The motivation for this broader definition and our approach to solving this challenge is coming from the following two key learnings/realizations:

There is a bigger picture beyond the brain, i.e., computing. A brain needs a body – robot hardware – a composition of sensors to understand the environment, actuators to do useful physical work, and all working in synchronization. Furthermore, a significant portion of the use cases includes a multi-robot scenario – i.e., multiple sets of computing, sensors, and actuators working in synchronization. Finally, on top of everything, there are people and processes that need to be followed.

Note that we are not disputing the benefits of connecting cloud computing and robots. We still believe in the benefits of having an extended and shared brain. What we are advocating now is to go beyond the brain, if the ultimate goal is to make robots more accessible.

Drawing from our conversations with end users and robotics solution developers, the current challenges preventing robotics from going mainstream are as follows:

The aha moment for us was when we saw some parallels between the old way of operating servers and modern cloud computing. Let us explain in more detail.

Before the advent of cloud computing, a whole team of experts was required to install, configure, test, run, secure, and update servers and applications. Even the biggest companies with the best IT departments were struggling on this front, and small to mid-size businesses didn’t stand a chance.

Computing was democratized – anyone had instant access to unlimited computing resources and they were charged by the hour! This leveled the playing field by allowing garage startups to compete with giants.  Formally, the National Institute of Standards and Technology (NIST)[6] defines the cloud as a model that gives computing resources (e.g., servers, storage, and software) the following essential characteristics:

As a thought exercise, let’s apply the above services to robotics, and imagine what the world might look like:

End users provision and deprovision robots as needed. Given the heterogeneity of the robotic hardware and software components, the provisioning step may also include a composition step where the user composes the required configuration from a catalog of hardware and software components without the need for expert help. This will create an open market driving innovation and competitive pricing.

End users don’t have to own robots, because institutions with lots of capital will hold the hardware. Having all units of a specific type of hardware managed in a common way will drive the economies of scale in hardware and incur lower maintenance costs.

Only the “brain,” or computing, part of the robot can have rapid elasticity. Since the body, or hardware components, cannot move at the speed of light, you will need to wait some time for robots to be shipped and clear customs when crossing borders.

End users can access their robots/robots fleets from anywhere – even using thin clients – like a browser and operate them in an intuitive way. E.g., this video shows our prior-work that allows the end user to remotely launch and control an aerial robot using a web browser.

Resource usage is measured and transparent to all users – end users, solution providers, hardware developers, software developers – e.g., how many picks did a robot do, how long did the robot run, how many times the global planning API was called, how much bandwidth/storage is used for logs/metrics, how much computation was consumed by the global map optimizer? This measured usage will be used to enable pay-per-use, optimization, and predictive planning thus optimizing cost.

Good start, but feels a bit like shoe-horning. Let’s try to emphasize characteristics that are more relevant to robotics, tone down some, and merge others.

Given the hardware components and safety requirements, it is hard to imagine an end user unilaterally provisioning a robotics solution on-demand, i.e., as soon as or whenever required without any human touchpoints, at least for the next couple of years. Unilateral consumption and flexible configuration of the deployed resources should be the first goal.

Given the requirement of having the hardware on-premises, i.e., customer location, rapid is a bit too much to aim for short/mid term and it is not the burning need based on the feedback.

When we say ‘measured service,’ outside the cloud-native domain we get a lot of eyes rolling. Let’s use open interfaces where open is primarily used in the sense of transparency and community.

Cloud Robotics is a model enabling self-service, elastic, and ubiquitous access to a shared pool of robotics resources with open interfaces

Let’s try a slightly detailed version with one of the solutions we’ve built as shown in the figure below. The solution consists of a set of robots that collaborate with the people in order to increase the efficiency of piece picking – a process that is the most human intensive in a warehouse.

The Cloud Robotics characteristics when interpreted to the above pick-assist solution gives:

Of course, there is a but. You probably started noticing this when we were trying to emphasize the characteristics. Here are the top three challenges when we go with this new perspective

The first two challenges – heterogeneity and physical distribution – can be better understood by looking into the ‘pets vs cattle’ idea used in cloud computing. In a pet service model, the resources are unique, lovingly hand-raised, and when they get sick, you nurse them back to health. You scale these resources up fostering their growth, and when they are not growing or fall sick, everyone notices. Meanwhile, in a cattle service model, each resource is “almost identical to each other”, and “when one gets sick, you replace it with another one”. You scale these by creating more of them, and when one is unavailable, no one notices [10]. For the history of pets vs cattle and proper usage see [11]. Although the ‘pets vs cattle’ analogy is used in the context of heterogeneity and scale in the cloud computing domain, we can also extend it to explain physical distribution. Ignoring the pet-cafes in Akihabara, pets stay at home creating a special bond between them and the people living there. Meanwhile, cattle are raised as a group in a farm, i.e., co-located as servers in a data center.

Now the challenge is #robots-are-pets. We are not saying this because we love them so much. Here is our logical argument:

Heterogeneity – in order to achieve some amount of optimality including financial viability on a given task robots need to have specialized mechanisms – ‘no free lunch’. We acknowledge the school of thought of building general purpose super-human robots like Doraemon to fix this problem, but don’t see a viable solution soon.

Physical distribution – Robots have to be ‘on-site’, where it is expected to do useful physical work. This is different from a server that can be placed in an arbitrary location as long as there is a good internet connection.

Now let’s move on to the third challenge – autonomy. Autonomy can be seen as a measure of how well you understand your surroundings and how well/fast you react to get the optimal reward – of course with minimal human intervention. Given this definition, to get a feel for the challenge, let’s compare them to the following three domains

Note that the above comparison is only related to autonomy, each of the domains have their own set of challenges and a big salute to those who are solving them and inspiring us.

Now how are we going to herd the robots?

Ah! We see some light

The gist of the idea is – pet herding requires a diverse set of skills/roles and resources that are at least an order of magnitude more compared to herding cattle. We are taking an open approach in a building the technology stack (a.k.a platform) that

We will keep you updated on developments at our end. If you have any thoughts or opinions, please feel free to write to us.

[3]  M. Tenorth, A. C. Perzylo, R. Lafrenz, and M. Beetz, “Representation and Exchange of Knowledge About Actions, Objects, and Environments in the RoboEarth Framework,” in IEEE Transactions on Automation Science and Engineering, vol. 10, no. 3, pp. 643-651, July 2013.

[6] The NIST Definition of Cloud

[8] K. Goldberg and R. Siegwart, Eds., Beyond webcams: an introduction to online