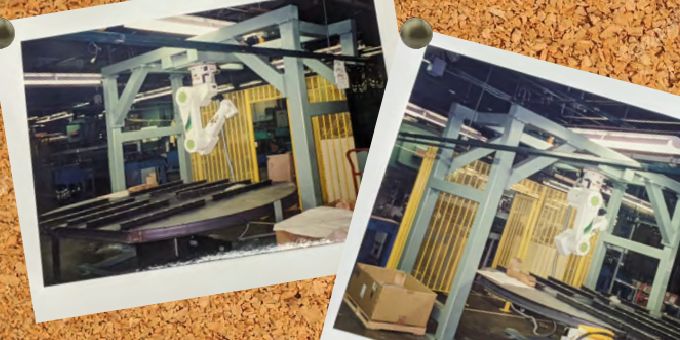 During its lifetime, this robot ran for 38,390 hours; the equivalent of a 20 years worth of 8 hour shifts. It only logged 57 maintenance entries, and showed exibility by working on two different welding lines.

Capital equipment is a large purchase, so naturally return on investment (ROI) is top of mind. The costs and requirements of every robotic application are different, but in this instance KMM’s investment was paid back quickly which helped them save big down the line.

“The robot paid for itself in less than two years back in the ‘90s, so we’ve basically been using it for free for the last 22 years,” said KMM Chief Engineer Scott Gordon. “It really helps with the capital expense budget when you don’t have to replace something frequently.”

When KMM stopped making the Vulcan 800 motorcycle in 2004, they were able to reprogram the robot to weld steering shafts in a product that was steeply growing in popularity: ATVs.

“We were making up to 60,000 (ATVs) per year, and they all had a steering shaft,” Gordon said. “So it was a very busy robot when it was First implemented.”

Manufacturers need to be agile enough to react to the ever-changing needs of their market. Kawasaki robots can be reprogrammed using AS Language to tackle different applications, giving them the versatility they need to keep up with demand.

When producing vehicles specically, any inconsistencies or errors in the welds can lead to an unsafe product, which isn’t an option for KMM. Because of this, robotic welding has become a must in their factory.

“When we develop a new product, we try to automate as much of the welding as absolutely possible just from a quality standpoint,” Gordon said. “You can’t rely on manual welding to be consistent day in and day out, or even from morning to late afternoon.”

Kawasaki’s state-of-the-art BA and R series welding robots match the quality of an expert welder on their best day - every day. Each robot is equipped standard with welding-specific software for quick and easy programming of the process path. Adaptive welding functionality is available to modify robot position, weave pattern and speed during welding to ll variable joints, which yields high quality welds every cycle.

Labor shortages are an ongoing issue for many manufacturers, especially in the metal fabrication weld. According to Tradesmen International, the average of the American Welder is 55 - that’s 13 years older than the average age of American workers - and less than 20% of welders are under the age of 35. Fewer and fewer younger workers are interested in this profession, making it challenging to find labor in this field.

Automation allows manufacturers to reduce labor costs and minimize downtime caused by labor shortages, so they can focus on keeping up with demand and providing a high quality product.

Kawasaki prides itself on manufacturing well made, reliable robots. But it’s one thing to hear that claim, and it’s another to see it firsthand.

“The robot just ran and ran and ran,” said Gordon. “The squeaky wheel gets the grease, but it never squeaked.”