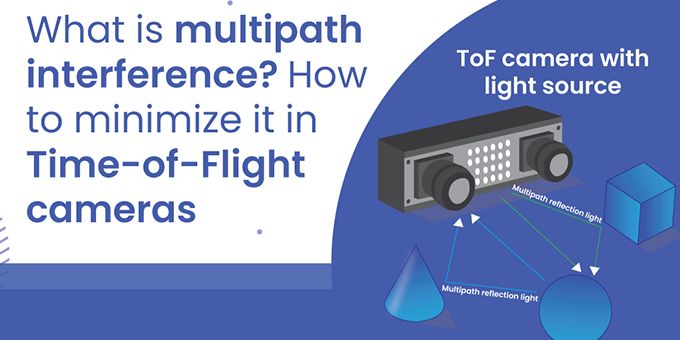 Time-of-Flight (ToF) cameras are powerful embedded vision solutions that provide real-time depth measurement – predominantly for applications that require autonomous and guided navigation. As you may know, ToF sensors use the light illumination technique where the depth is measured based on the time it takes for the emitted light to come back from the target object. (To learn more about how the technology works, please visit What is a Time-of-Flight sensor? What are the key components of a Time-of-Flight camera?). In order to achieve this, the entire scene must be illuminated before the differences between the light and the reflection are measured. However, these cameras have a stumbling block towards depth measurement called multipath interference (or multipath reflection) to overcome. In this blog, let’s look at what multipath interference means and how you can overcome it to ensure high performance of your Time of flight camera.

What is multipath interference? Why is it important in Time-of-Flight cameras?

ToF sensors operate based on the theory that every individual pixel follows a single optical path. However, in a practical scenario, multiple illumination paths (from the light source) tend to get mapped to the same pixels. This is known as multipath interference. And this can prove to be extremely detrimental to ToF cameras as it could lead to drastic measurement inaccuracies. To put things in a nutshell, the light gets reflected from the target object and other nearby objects before reaching the camera sensor. It causes multiple paths of illumination – affecting the depth estimation.

The below figure illustrates how multipath interference occurs: 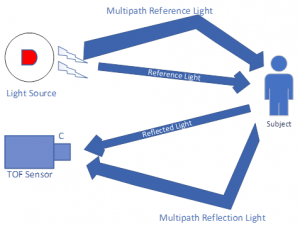 The four instances where multipath interference could happen are:

Let us now try to understand the concept using a practical example. Consider a ToF camera placed on a table as shown in the figure below: 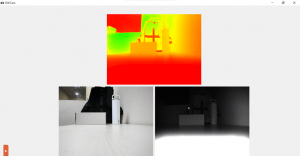 When the TOF camera is placed on the table as shown in the above figure, owing to the reflection from the table surface in the light’s path, the depth map is completely affected. As you can see, even a far object like the wall in the scene is shown as red (red indicates that the object is nearer relative to the other objects in the scene). Since, in these scenarios, several optical paths are juxtaposed at a single pixel, the measurement of depth gets significantly affected. Industry experts also opine that this is one of the leading causes of errors in even the most advanced ToF sensors.

Multipath interference is a challenging problem to solve since it involves the combination of multiple light paths. It is close to impossible to completely mitigate it. However, there are ways in which this can be minimized to ensure maximum accuracy of a time of flight camera. Let us look at these methods in detail in this section. This involves setting up the target scene in such a way that interference is minimized. Following are the steps you can take to do this while setting up the camera. 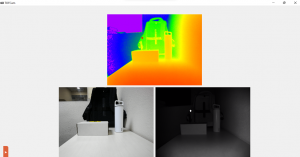 In the above setup, the camera is placed on a tripod. Here, in the depth map, we can see different color shades indicating different depths in the same scene.

e-con Systems has been pioneering in the field of depth sensing being one of the first companies in the world to develop stereo cameras for embedded vision applications. Our latest addition to the depth camera portfolio is a state-of-the-art Time-of-Flight camera that is capable of delivering both depth data and RGB data in a single frame. The camera comes with two modes known as the far mode and close-range mode with the former having the ability to measure depth up to a distance of 6 meters while the latter can capture depth data from a distance of 0.2 to 1 meter. With these features, this time of flight camera is an ideal solution for applications such as autonomous mobile robots, autonomous guided vehicles, people counting systems, remote patient monitoring systems, etc.
To learn more about the features, benefits, and target applications of the camera, please visit the product page. We hope this blog helped clear up some of your confusion on how to minimize multipath interference in time of flight cameras. As always, if you need any help in picking and integrating the right cameras into your camera-enabled device, please write to us at camerasolutions@e-consystems.com. Also do checkout the Camera Selector in case you wish to look at e-con Systems’ complete portfolio of cameras.