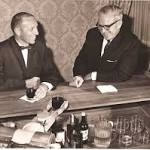 Joseph F. Engelberger, an engineer and entrepreneur who pioneered the robotics field, died peacefully at his home this morning, December 1, 2015, in Newtown, Connecticut. Engelberger - widely known as the "Father of Robotics" and creator of the world's first industrial robot - revolutionized modern industrial and automotive manufacturing processes and went on to establish robotics in human services. Engelberger was 90 years old.

Engelberger, an industry advocate, author, and international ambassador for robotics, founded Unimation, Inc., in 1956, the world's first industrial robotics manufacturer. Working closely with inventor George Devol, he developed the first industrial robot in the U.S., called "Unimate", which was installed for industrial use in a General Motors plant in 1961. Since then, approximately three million industrial robots have been installed in manufacturing facilities around the world.   Full Press Release.
More Industrial Robotics Stories | Articles | News