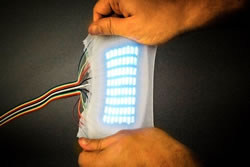 By Brendan Byrne for ValueWalk:  Researchers at Cornell University have developed an electronic artificial skin that doesn’t mind being stretched to 500% its original size (cell phone), glows in the dark and can move a bit like a worm.

In a paper published yesterday in the journal Science, a team of researchers showed off glowing electric skin that could be put to use in future wearables. While artificial skin that responds to commands has been done before, electronics embedded in the skin have generally broken when stretched. However, the team seems to have leaped over this hurdle by using hyperelastic, light-emitting capacitor (HLEC) technology.

“It’s actually much, much, much more stretchable than human skin or octopus skin,” says Chris Larson, a doctoral candidate and researcher in Cornell’s Organic Robotics Lab. “In terms of texture, it’s actually more like a rubber band or a balloon.”

While Larson freely admits that he doesn’t know much about cephalopods, the team was inspired by biology, specifically, the octopus beak with its ability to both move and stretch.

“The researchers created a three-chamber robot from the material, with the newly developed ‘skin’ layers on top, and inflatable layers below that allow movement,” according to a release from the American Association for the Advancement of Science. “As the chambers expand linearly, the robot moves forward with a worm-like wiggle.”  Cont'd...