Zurich-based startup MyoSwiss has developed a lightweight exoskeleton that works like an e-bike for the legs. It assists the wearer's movements with electronic reinforcement.

The Future of Robotic Exoskeletons: Roadblocks and Recent Advances

Exoskeletons have remarkable potential. As with their science fiction counterparts, these machines can amplify their users' strength, letting them lift heavier objects with less effort.

The turning of the lead screw transfers the motor power to the spring. It presses from the lower belt on the upper belt, supports the upper body and relieves the lumbar spine.

An exoskeleton must be lightweight, compact, powerful, reliable, and easy to use - what could be easier? Many developers around the world dabble in this discipline with different degrees of success.

Ironhand ® from the Swedish company BIOSERVOTECHNOLOGIES is a soft, active exoskeleton for the hands and fingers. Normally, a gripping action is made possible by the muscles in the lower arm and hand.

Comau's MATE exoskeleton was chosen by IVECO to reduce the fatigue on the upper limbs suffered by the operators engaged in the heaviest activities inside the various production departments of the company.

Paralyzed people can learn to walk again with the aid of electromechanical exoskeletons. However, it's not easy. It takes a lot of engineering and hard training.

It Will Be Possible to Integrate Exoskeletons Into Clothes

A stable wheelchair is automatically heavier. The same thing applies to exoskeletons. For a wearer to move about freely for an entire day, the battery has to be very powerful. But this means that it is also large and heavy. 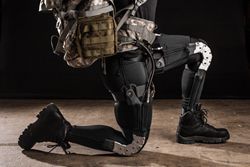 Combat troops, miners, fire-fighters, EMS and disaster personnel are among those who can benefit from Draper's new approach to developing exosystems.