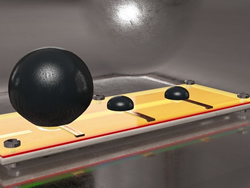 Jon Excell for The Engineer:  Designed by a team at the Max Planck Institute for Intelligent Systems in Stuttgart, the new device is claimed to have considerable advantages over existing pneumatically-powered soft actuators as it doesn’t require a tether.

The device consists of a dielectric elastomer actuator (DEA): a membrane made of hyperelastic material like a latex balloon, with flexible (or ‘compliant’) electrodes attached to each side.

The stretching of the membrane is regulated by means of an electric field between the electrodes, as the electrodes attract each other and squeeze the membrane when voltage is applied. By attaching multiple such membranes, the place of deformation can be shifted controllably in the system. Air is displaced between two chambers.

The membrane material has two stable states. In other words, it can have two different volume configurations at a given pressure without the need to minimize the larger volume. Thanks to this bi-stable state, the researchers are able to move air between a more highly inflated chamber and a less inflated one. They do this by applying an electric current to the membrane of the smaller chamber which responds by stretching and sucking air out of the other bubble.  Cont'd...