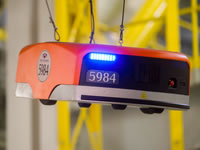 Eugene Kim for Business Insider:  It wasn't until 2014 that Amazon really started to use the machines made by Kiva, the robotics company it bought for $775 million in 2012. Kiva makes robots that automate the picking and packing process at large warehouses.

But in the short two years they've been deployed across Amazon's warehouses, Kiva's robots have been a real cost saver, according to a new note published by Deutsche Bank on Wednesday.

The note says Kiva robots have cut operating expenses by about 20%, quoting Amazon exec Dave Clark, adding that it would translate to roughly $22 million in cost savings for each fulfillment center.