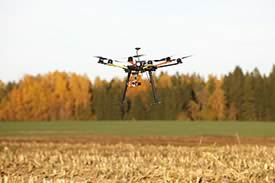 Last August, the Federal Aviation Administration released its final unmanned aircraft rule allowing for the commercial use of drones, including for agricultural purposes. RnR Market Research in April 2016 predicted the agriculture drone market would be worth $3.69 billion by the year 2022. A forecast by the research firm says the market is poised for significant growth over the next few years.

The forecast says the use of drones brings transparency to agriculture, along with improved efficiently and higher productivity.  Source:  Hoosier Ag Today