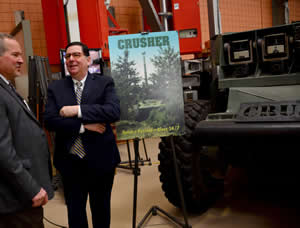 Daniel Moore, Pittsburgh Post-Gazette:  At the National Robotics Engineering Center in Lawrenceville, two decades of robotics research is on display in the 28 gleaming plaques on the wall: inscribed patents for pieces of technology invented at Carnegie Mellon University.

Now, flush with government money and commitments from private industry, a nonprofit founded at the school is embarking on a new mission: selling the value of robotics and automation to American manufacturing.

The Advanced Robotics for Manufacturing Institute, called the ARM Institute, hosted more than 200 people from across the country on Wednesday at the cavernous research center for the ambitious undertaking’s first membership recruitment meeting.

Over two-day discussions, the attendees — large corporations like Airbus and Wal-Mart, schools like Texas A&M University, workforce development agencies like Catalyst Connection — will begin to hammer out agreements that the institute hopes will lead to at least $173 million in private funding.

That money is in addition to $80 million secured in January from the U.S. Department of Defense, a grant that got the nonprofit off the ground.   Full Article: