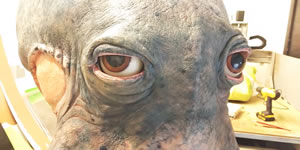 David Gianatasio for AdWeek:  Unless you’ve been lost at sea, you’ve probably heard about the giant robotic squid that Old Spice deployed last weekend for a wacky, high-profile internet game on Twitch. (It generated plenty of ink!)

The breathtaking beastie starred in a game called S.Q.U.I.D. (Shared Quests Uniting Individual Dudes), which was live-streamed Friday, Saturday and Sunday at OldSpiceTwitch.com. Wieden + Kennedy staged the competition to introduce the brand’s Krakengard line, which features a tentacled ocean creature on every product label.

Dudes were invited to guide the amazing cyber-cephalopod through various bro-tastic “rites of passage,” such as working at a pizzeria, learning to drive and rocking out on a drum kit. All told, the event drew more than 6 million users and, at its pinnacle, about 30,000 viewers attended the stream.

To bring the project’s main attraction to life, W+K engaged a team at production house MediaMonks led by creative technical director Rafael Fittipaldi. Working over three months, Fittipaldi enlisted dozens of artisans, engineers and technicians from São Paolo (his base of operation), Amsterdam and Los Angeles to build the eight-armed squid, which consisted of more than 1,000 robotic elements controlled by 32 motors.  Full Article & Video: