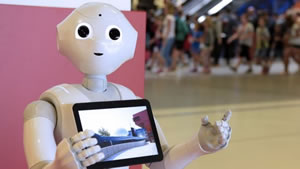 As so often is the case, science fiction has become science fact. A report published by the Royal Society and the British Academy suggests that there should not be three but just one overarching principle to govern the intelligent machines that we will soon be living alongside: "Humans should flourish."

According to Prof Dame Ottoline Leyser, who co-chairs the Royal Society's science policy advisory group, human flourishing should be the key to how intelligent systems governed.

"This was the term that really encapsulated what we wanted to say," she told BBC News.

"The thriving of people and communities needs to be put first, and we think Asimov's principles can be subsumed into that."

The report calls for a new body to ensure intelligent machines serve people rather than control them.

It says that a system of democratic supervision is essential to regulate the development of self-learning systems.

Without it they have the potential to cause great harm, the report says.

It is not warning of machines enslaving humanity, at least not yet.  Full Article: