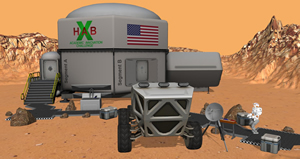 Evan Ackerman for IEEE Spectrum:  NASA’s Space Robotics Challenge (SRC) took place last month, full of virtual Valkyries wandering around a virtual Mars base trying to fix virtual stuff. Anyone was allowed to participate, and since the virtual nature of the competition means there was no need for big expensive robots that mostly didn’t fall over, anyone actually could (and did) participate. Of the 93 teams initially signed up to compete, NASA selected 20 finalist teams based on their performance completing some tasks in the Gazebo 3D robot simulator, and each of those finalists had to program a Valkyrie humanoid to complete a repair mission on a simulated Mars base.

The winner of the SRC was team Coordinated Robotics, which also was the only team to manage a perfect run with 100 percent task completion, taking home the US $125,000 top prize plus a $50,000 “perfect run” bonus. “Team” may be a little bit of a misnomer, though, since Coordinated Robotics consists entirely of one dude: Kevin Knoedler. We spoke with Kevin about his epic win, and also checked in with Nate Koenig from Open Robotics, which leads the development of Gazebo and helped organize the SRC, to get more info on the competition, along with footage of all the best outtakes.

The SRC was very similar to the VRC (the qualifier for the DARPA Robotics Challenge), in that all of the teams competed by running their code in a Gazebo virtual environment. “The tasks themselves were somewhat inspired by The Martian,” Open Robotics CTO Nate Koenig told us. “Valkyrie is on Mars, preparing the way for human settlement, and a dust storm comes.” Post dust storm, Val has to align a communications dish, repair a solar array, and locate and fix a leak in the habitat. Here are some highlights from the competition and the Full Article: