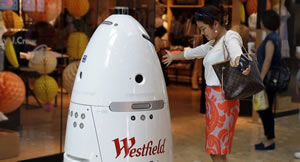 Janie Har, Associated Press: Â Security guard Eric Leon watches the Knightscope K5 security robot as it glides through the mall, charming shoppers with its blinking blue and white lights. The brawny automaton records video and sounds alerts. According to its maker, it deters mischief just by making the rounds.

Leon, the all-too-human guard, feels pretty sure that the robot will someday take his job.

Even in the technology hotbed stretching from Silicon Valley to San Francisco, a security robot can captivate passers-by. But the K5 is only one of a growing menagerie of automated novelties in a region where you can eat a delivered pizza made via automation and drink beers at a bar served by an airborne robot. This summer, the San Francisco Chronicle published a tech tourism guide listing a dozen or so places where tourists can observe robots and automation in action.

Yet San Francisco is also where workers were the first to embrace mandatory sick leave and fully paid parental leave. Voters approved a $15 hourly minimum wage in 2014, a requirement that Gov. Jerry Brown signed into law for the entire state in 2016. And now one official is pushing a statewide "tax" on robots that automate jobs and put people out of work.

It's too soon to say if the effort will prevail, let alone whether less-progressive jurisdictions might follow suit. The tussle points to the tensions that can flare when people embrace both technological innovation and a strong brand of social consciousness.

Such frictions seem destined to escalate as automation makes further inroads into the workplace. One city supervisor, Norman Yee, has proposed barring food delivery robots from city streets, arguing that public sidewalks should be solely for people.

"I'm a people person," Yee says, "so I tend to err on the side of things that should be beneficial and safe for people."

Jane Kim, the city supervisor who is pushing the robot tax, says it's important to think now about how people will earn a living as more U.S. jobs are lost to automation. After speaking with experts on the subject, she decided to launch a statewide campaign with the hope of bringing revenue-raising ideas to the state legislature or directly to voters.

"I really do think automation is going to be one of the biggest issues around income inequality," Kim says.

It makes sense, she adds, that the city at the center of tech disruption take up the charge to manage that disruption. Â Full Article:

What is Inventory Accuracyâ€¦ And Why Should 3PLs and Brands Care?