Can Robots help get more Girls into Science & Tech? 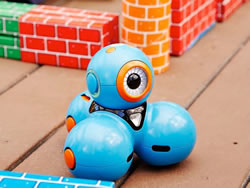 Matt Simon for Wired: HERE’S A DEPRESSING number for you: 12. Just 12 percent of engineers in the United States are women. In computing it’s a bit better, where women make up 26 percent of the workforce—but that number has actually fallen from 35 percent in 1990.

The United States has a serious problem with getting women into STEM jobs and keeping them there. Silicon Valley and other employers bear the most responsibility for that: Discrimination, both overt and subtle, works to keep women out of the workforce. But this society of ours also perpetuates gender stereotypes, which parents pass on to their kids. Like the one that says boys enjoy building things more than girls.

There’s no single solution to such a daunting problem, but here’s an unlikely one: robots. Not robots enforcing diversity in the workplace, not robots doing all the work and obviating the concept of gender entirely, but robots getting more girls interested in STEM. Specifically, robot kits for kids—simple yet powerful toys for teaching youngsters how to engineer and code.

Plenty of toys are targeted at getting kids interested in science and engineering, and many these days are gender specific. Roominate, for instance, is a building kit tailored for girls, while the Boolean Box teaches girls to code. “Sometimes there's this idea that girls need special Legos, or it needs to be pink and purple for girls to get into it, and sometimes that rubs me the wrong way,” says Amanda Sullivan, who works in human development at Tufts University. “If the pink and purple colored tools is what's going to engage that girl, then that's great. But I think in general it would be great if there were more tools and books and things that were out there for all children.”  Full Article: