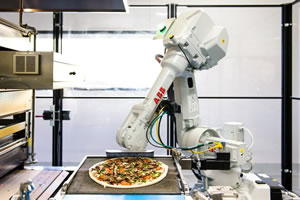 Why so much money for a company automating pizza production and delivery? Because if successful, it will change the way fast food operates by increasing speed and freshness while reducing a significant portion of labor costs.

That's especially important in the restaurant industry. Food costs are going down, which is good news for fast food companies, but labor costs have been rising steadily. The cost of labor as a percentage of sales rose .8 percent in 2016, according to the consulting firm BDO.

Since fast food relies on low-skill, repeatable tasks, it's the perfect use-case for automation. That's led to a rush of innovation in food service.

The New York Times recently profiled a salad-making robot named Sally, which is made by Chowbotics. The company says its robot eliminates the unsanitary elements of the ubiquitous salad bar.  Full Article: