Robot orders in North America declined slightly in the first quarter of 2019 compared to the same period last year, according to the latest statistics released by the Robotic Industries Association (RIA), an organization of the Association for Advancing Automation (A3). North American companies ordered a total of 7,876 robots valued at $423 million during the three months, a decline of 3.5 percent in units and 3.2 percent in dollars compared to the first quarter of 2018. 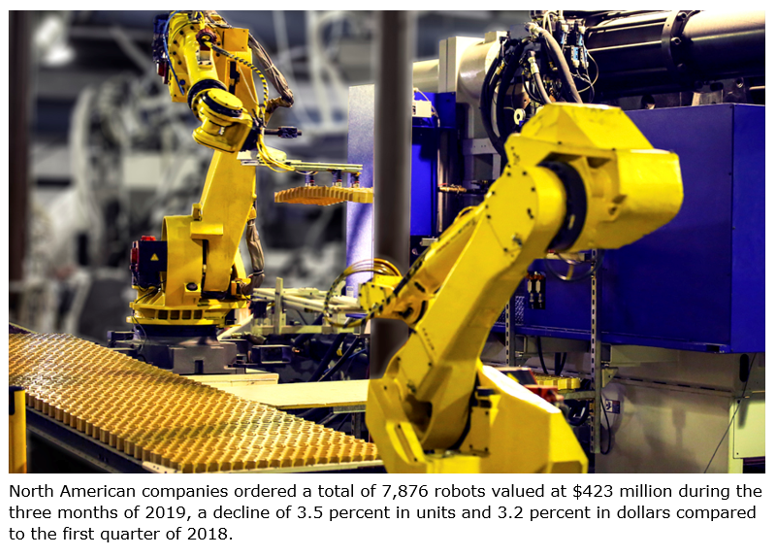 The decline was driven by a decrease in orders from automotive component suppliers (-16 percent), plastics and rubber (-16 percent), electronics (-17 percent), and metals (-17 percent). Orders from automotive original equipment manufacturers (OEMs) were up 41 percent, however, as were orders from the food and consumer goods industries (+32 percent). Another bright spot was the solid increase in orders over the fourth quarter of 2018, with units up nearly 16 percent and revenue up nearly 9 percent.

Shipments Normalize from a Record Year in 2018

“We are coming off a record year in 2018 so slight declines aren’t unexpected, and long-term signs remain very healthy,” said Jeff Burnstein, RIA president. Burnstein cited the strong growth of the recent Automate 2019 show in Chicago in April, where attendance soared 25 percent over the 2017 show.

“Many of the Automate show attendees are just beginning to explore how robotics and automation can help their companies become stronger global competitors,” Burnstein added. “Their expected purchases over the next year or so should help the industry grow going forward.”

About Association for Advancing Automation (A3)

The Association for Advancing Automation is the global advocate for the benefits of automating. A3 promotes automation technologies and ideas that transform the way business is done. A3 is the umbrella group for Robotic Industries Association (RIA), AIA - Advancing Vision + Imaging, Motion Control & Motor Association (MCMA) and A3 Mexico. RIA, AIA, MCMA and A3 Mexico combined represent over 1,200 automation manufacturers, component suppliers, system integrators, end users, research groups and consulting firms from throughout the world that drive automation forward. For more information, visit: A3, RIA, AIA, MCMA, A3 Mexico.