The Lab of the Future: How New Tech Like Robotics Balances with COVID Realities 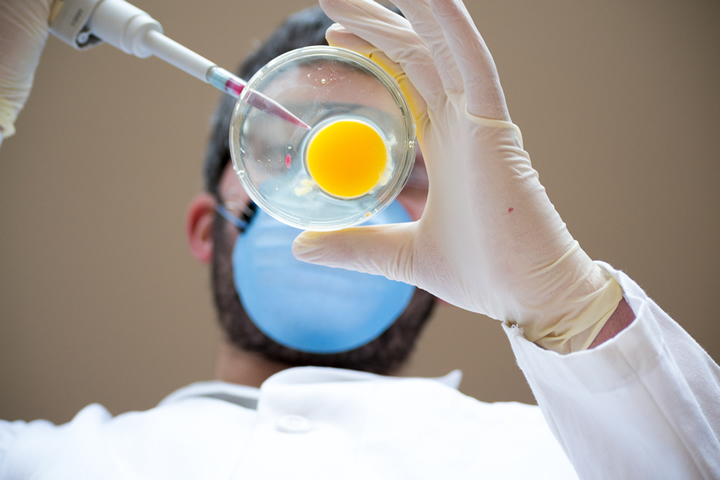 What will the laboratory of the future look like, especially when dealing with post-COVID realities? Given the current situation of working during a pandemic, we really do need to be innovative in our how we design labs today for use tomorrow.

In the laboratory environment, typical applications for robotics including tasks such as aseptic filling, compounding of medications, and parts washing. Typical robots used for these and other functions include Selective Compliance Articulated Robotic Arm (SCARA), Cartesian and Articulated robots. SCARA robots are particularly suited to fast, precise repeatability, such as high speed pick and place material handling. Cartesian robots, which are fairly low cost with a predicted range, are suited for single purpose uses, such as assay testing. Articulated robots, with their flexibility of movement and rotating elements, are appropriate for a wider range of applications than either of the others.

The ancillary benefit of robotics for laboratory employees is less human interaction in lab spaces, while also helping with ergonomics and reducing the possibility of injury caused by repetitive tasks.

Ultimately, however, the real driver for lab innovation here is that we want scientists to do science, and to use their knowledge and their power to think. We don't want them spending unnecessary time with repetitive tasks, loading machines or equipment or pushing carts full of vials to cold storage.

The antique roots of the lab of the future

Surprisingly, the roots of the lab of the future are actually more than 100 years old. In many ways Thomas Edison could be argued to have set up the lab of the future. Edison’s laboratory was an open, collaborative, interdisciplinary space. He adopted a repetitive, almost assembly-line process for how things should be done in the lab environment.

Unfortunately, few labs truly followed suit. If anything, labs were very closed or segmented. And laboratory scientists for better or worse were extremely territorial about their labs and their environment in general. Over time, the key concern about labs increasingly became storage-related. We lost touch with Edison’s original vision of labs that can be open, collaborative and innovative.

Of course, eventually the emphasis on storage became too much, as scientists began to hoard and collect materials in the lab in mass, trying to keep all of it in self-contained areas. The lab of the future demands that we consider how logically to store materials safely – but outside the lab, to keep the lab itself more open and inviting.

Some previous efforts at a “lab of the future” have had conflicts between design and function. Yes, there was more connection to people visually, but that design reaction did not always take ergonomics into account, failing to integrate the equipment in the layout to ensure the optimal operation of that equipment and enabling scientists to do their best work.

So when we think about this lab of the future, we really have to hone in on how we can set up the space properly, to make it both efficient and usable.

It's going to be very interesting as we design future lab spaces, because we’ll not only need to consider efficient use of space. We will also need think about how social distancing will work.

We’ll need to think about potentially reducing the number of people in those areas and alternating days where they're actively using those spaces. And we’ll also need to think about how existing lab furniture will begin to better accommodate new technology, such as robotics, that will almost certainly become more widely used.

The watchword here is openness. More open-type bench tops or casework give lab workers a visual connection with colleagues and the environment in general. It also helps with safety because it presents relatively unobstructed views to the outdoors. By designing lab spaces to be more open, you create both a more user-friendly environment for workers and a space to accommodate future technologies as they are introduced into the operation.

When you consider lab benches, tables or footprints for casework, for example, think particularly about how that integrates with power, data, gas, lighting, and HVAC. Many casework systems now come in essentially all-in-one units that take all those concerns into account in a single module.

But it bears repeating that laboratory benching and casework systems must accommodate emerging technology. For example, a lot of the bench top equipment that we're seeing for robotics has a somewhat larger footprint than traditional equipment. Traditional casework or benching systems might be too inefficient for this type of future robotics use – shelving and overhead storage systems, for example, can sometimes get in the way of such equipment.

A likely design solution, then, might be to consider whether some of your laboratory equipment or casework components can be movable. Movable laboratory components will be increasingly important in designing a laboratory of the future. If your systems are movable, they're more ergonomic, more accessible, and often easier to change out and maintain.

Take high performance liquid chromatography systems, for example. There’s typically no good way to collect waste, or to get to the back of the unit where you have to change out connections and do maintenance of the systems. Similarly, robotic equipment may be larger than current bench top equipment and may actually take up a fair amount of floor space. With movable casework, tables and storage units can be rolled out of the way to make room for lab robotics, while still maintaining an overhead space for important utility connections – such as compressed air, nitrogen, and so on, as well as power and data systems.

We’re already seeing more this type of equipment being movable in lab design. In fact, many designs are now enabling fixed perimeter equipment on the outside of the labs, with a sort of open “dance floor” in the middle.

This type of approach might be useful to mitigate the effects of vibration created by new equipment and susceptibility to vibrations for others. In some extreme cases, the vibrations from someone walking down the hallway while equipment is operating may affect the science going on in the instrument itself. Designing laboratories to take vibration into account is particularly important as robotics and automation equipment is gaining acceptance.

Finally, some laboratory operations – primarily in the testing and clinical side – are being converted to completely automated facilities, even including a track line. This clearly has some considerable benefits. For example, air change rates can be incorporated into the equipment itself, eliminating some otherwise complicated engineering. This can have a significant impact on the cost of utilities for the building exceeding 50 percent energy savings and even approaching net zero energy use for our labs. On the other hand, however, this move to full automation will require laboratory designers to be more aware of sustainability in the use of equipment.

Of course, it all depends on the type of automatic systems that you’re putting into the lab spaces. But we must all carefully consider how we adapt and change out in the future.

Labs in the post-COVID reality

Changes in the way laboratory work is done (from the perspectives of both efficiency and the need to minimize contact during this pandemic) implies a greater reliance on automation and robotics. It does not, however, imply that fewer people will have lab career opportunities. In fact, more people may be required to conduct data analysis, as robotics creates faster turnaround times in testing samples.

Robotics is gaining acceptance because there is so much more throughput required of laboratories, particularly now. With robotics, scientists are increasingly able to focus more on the science and less on routine functions, such as carting specimens between laboratories for testing.

In terms of practical, day-to-day work, however, the open laboratory environment that is so desirable may need to be reconsidered case-by-case, to create separate work areas, with physical separations between benches.

Traffic flow also will be important. Just as grocery stores now have floor indicators showing traffic flow, similar traffic flow guidelines may need to be adopted in the post-COVID lab environment. There must be proper clearance for aisleways and to accommodate workflow, while also making space for robotic automation equipment that is likely to be introduced over time.

Limiting the number of surfaces that scientists and other lab employees must touch in the course of their workday will be increasingly important. To borrow another strategy from grocery stores and retail facilities, automatic doors may become a staple in laboratories of the future.

With more robotic equipment – and more equipment in general – modern lab design also will need to find ways to reduce overall energy strategies. A compressor-less freezer, for example, is more efficient, less noisy, and has a smaller footprint than a traditional freezer. The cost of the new equipment will be offset by the savings on air handling and other HVAC concerns, such as heat load and how to eliminate excessive heat from the facility.

Laboratories are increasingly going vertical, with more floors as opposed to large open areas on a single floor. This is also ushering in innovation that can limit exposure among laboratory workers. Pneumatic tube systems can transport vials from floor to floor or even from building to building, feeding directly into the appropriate test equipment. This eliminates the need for a person to cart those vials around, and further supports social distancing protocols.

Of course, vertically-designed labs raise other safety issues, such as the storage of hazardous chemicals, and how to move those chemicals above the ground floor. Some new storage cabinets are designed with 90-minute safety windows as opposed to a more traditional 10-minute, code-required window. In other cases, variances may need to be sought for the purposes of safety. Also for safety purposes, these vertical laboratories must be designed with means to vent potentially hazardous fumes on the upper levels.

These are only a few of the concerns that designers have to consider when designing the lab of the future. Successful design will be dependent on a careful blending of social distancing, open communication, and the integration of technology such as robotics and automation that will allow scientists to focus on their work in a safe and efficient environment and truly optimize the lab.

Mark Paskanik is a Laboratory Design Expert and Architect for CRB USA, and an AIA member.