Industrial Robots Have Moved From Maturity Into A Fast-Growth Phase

The past five years have been a roller-coaster ride for the industrial robot market. A market decline in 2019 was followed by disruption in 2020, a record high in 2021, and we now see a long-term positive growth forecast. In fact, it could be said that the industrial robot market has, as a result of COVID, done something highly unusual – it has moved from a mature and conservative phase into an exciting, fast-growth, almost start-up-like phase.

That said, in the short-term, though industrial robots have received a COVID-boost, they are also susceptible to the same post-COVID challenges as all industries.

2017 was a good year for the industrial robot sector, with revenues increasing by 20%. But bad times were just round the corner. From 2018 onwards, weak consumer demand in the automotive sector (by far the biggest consumer of industrial robot technology), a poorly performing electronics market – notably smartphones, a tough machine builders’ market and ongoing trade wars resulted in a steep decline in revenues. And then the pandemic hit.

In the two-year period 2019-2020, revenues shrank by 10%. These losses mainly resulted from the poor performance of the automotive industry and the global macro-economic environment, and were not offset by increasing demand from the new energy automotive sector. If the market cycle had followed its expected pattern, 2020 would have seen the industry rebound. However, covid broke that cycle and completely disrupted the rhythm of recovery due to enforced slow-downs and closures of warehouses and factories.

But the 2020 trough was followed by a 2021 peak, when shipments saw a year-on-year increase of 31.9%. This remarkable growth was partly just a 2020 rebound, but pandemic-induced enthusiasm among manufacturers for automation solutions as a way to mitigate ongoing manpower shortages and shut-downs meant the market exceeded its 2019 level.

Repeated waves of COVID are continuing to disrupt machinery production in Asia, where China accounted for 52.5% of global industrial robot shipments in 2021. These recurring COVID outbreaks are causing disruption to the supply chains feeding robot manufacturers. Other major issues around shipping capacity and pricing and sharp fluctuations in raw material prices are also hitting supply lines. Order books for industrial robots may be full, but if the parts aren’t on the shelves, production lags behind demand and lead times rocket.

The Russia-Ukraine conflict has also impacted on the robot market especially EU, as energy prices, which were already rising, have hit record levels. The war is also causing currency instability across the globe, hitting exchange rates which heavily impacts foreign trade. In this unstable atmosphere, decision-making RE investment has become a hesitant process for all manufacturers, and particularly so for end-users of industrial robot solutions, because industrial robots tend to be highly expensive.

The pressures described above, combined with increased demand, naturally have a big impact on industrial robot pricing. We’d already seen price increases in 2021 in the Americas and EMEA markets, and they began to appear in APAC markets earlier this year too. 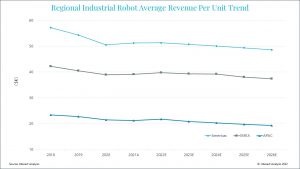 Even local Chinese vendors who are more sensitive to pricing are following this upward pricing trend due to pressures in the supply chain. Upstream from robot manufacturers, it’s become very much a sellers’ market for suppliers of key components to the robot industry, such as reducers, servos, controls, and sensors. The performance of leading component manufacturers is very strong and, while demand outstrips supply, they hold the whip-hand where pricing is concerned.

This will inevitably force up prices of finished industrial robot products. But we see it as essentially a short-term phenomenon with price increases soon to be followed by average like-for-like price declines of the order of 2-3% per year over the next 5 years. These reductions will be moderate compared to what we have been used to, partly because of the increased sales of larger payload models which come at a higher cost.

The COVID-19 pandemic and the subsequent labour shortages and rising wage costs have turbo-charged factory automation across a whole swathe of industrial sectors. It’s widely recognised that automation future-proofs enterprises against future crises and increases levels of efficiency and productivity, and with that, profitability. Notwithstanding the current stresses in the industrial robot market, there is strong optimism for the future.

We anticipate overall 10% year-on-year growth in the robotics market up to 2026, when global sales are expected to exceed 770,000 units. Continued increases in the costs of labor, the ongoing decline in robot pricing, the trend away from mass production to semi-customized production, the demand for shorter and faster product cycles, and the drive to further increase efficiency and product quality, will all further drive robot adoption. The future for the industrial robot industry looks secure for one simple reason: robots increase productivity. And, as the famous saying goes: “Productivity isn’t everything, but in the long-run it is almost everything.”

To learn more about the latest industrial robot trends, get in touch with Maya today: Maya.Xiao@InteractAnalysis.com