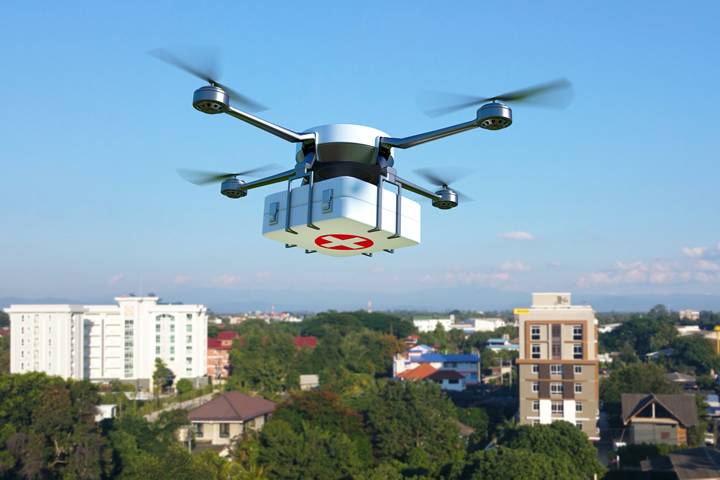 The latest advancement in the healthcare sector is the use of drones to transport medical supplies and devices. Simulation models show that this new mode of transport could have huge cost advantages, with savings between 20 and 50 per cent compared to traditional multi-tiered land transport systems. Due to their smaller size, drones also have the advantage of being able to access more remote areas and need less manpower to run them. Robert Brown, marketing executive of medical battery manufacturer Ultralife Corporation, explores how drones are impacting the healthcare sector.

Drones are proving invaluable in remote communities that have poor access to healthcare and are geographically distant from major hospitals, such as south-east Asian countries and especially their islands such as Indonesia. The current system of using helicopters to deliver medical equipment amongst islands is not cost-efficient and can lead to some of the most rural communities being forgotten, as there are no helicopter landing spots nearby.

Cargo drones are easier to land as they can be six times shorter in length than cargo helicopters. Fixed wing drones can also deliver medical supplies whilst airborne by dropping the load, which parachutes down into a three-metre-wide landing zone (an area ten times smaller than a typical helicopter landing zone).  Helicopters cannot drop supplies whilst airborne due to the risks of the parachute getting caught in the rotor blades.

The large landing zone needed for helicopters can also be problematic in the event of a natural disaster, when terrain becomes inaccessible. For example, in 2017, Hurricane Ophelia and Storm Emma hit the Aran Islands in the Republic of Ireland within four months of each other, causing significant damage to roads and seaports. Therefore, it is no surprise that the Aran Islands have been participating in drone delivery trials, with the WINGCOPTER drone distributing insulin successfully.

Drones have also been used to dispatch automatic external defibrillators (AEDs) to people in need. Trials in Sweden (reported by The European Heart Journal) proved successful and, in 63% of cases, the AEDs arrived by drone before an ambulance reached the scene.  One AED delivery even saved a 71-year-old man’s life, arriving three minutes after the alarm was first raised by a passer-by.

In addition to distributing medical supplies and devices to those in need, drones can be used to help healthcare professionals diagnose health problems more rapidly, through the delivery of urine or blood samples from homes to hospitals. For example, Neuron’s MediDrone project has seen them help the NHS with Urinary Tract Infection (UTI) samples. The National Institute for Health Research cites UTIs as one of the most common infections but, to get antibiotics, a urine sample must be tested by the doctor. For those in remote communities or with other health problems, travelling to give a sample could be a problem. Being able to give one from your home, and have a drone pick it up, speeds up the process of getting the diagnosis and prescription for medication.

The samples themselves may also be time and temperature sensitive, making prompt and efficient delivery essential, even between different buildings in the same hospital. If this is not done smoothly, it can massively increase the time patients wait in the hospital, which can lead to an increase in bed occupancy. Drones can help decrease the time it takes to get a sample, whilst maintaining the quality control needed.

Although there have been many successful pilot schemes, there are some challenges remaining before more widespread uptake of drones is feasible. One of the key challenges will be increasing the weight that a drone can carry, so that larger quantities of medication or other medical supplies can be delivered (at the moment, WINGCOPTER has a maximum payload weight of 6.0kg).  There are drones in existence that carry larger payloads, such as The Griff 300 that has lifted a person and can take a maximum weight of 226kg, but the larger the payload the larger the drone – so you could run into the issue of needing bigger landing zones.

Although drones have already made significant improvements to the healthcare industry, they are still relatively new. Many of the case studies are trial runs for drone technology. One of the struggles for drones in healthcare are aviation rules, which are still trying to come terms with this relatively new form of air transportation.

Bill Wimberley, head of business at WINGCOPTER, also suggests that drones will become more economically viable once their efficiency and battery-life increases. To ensure that the optimum battery is selected for a drone, drone manufacturers ought to consider customised solutions that take into consideration the weight that is being carried (and the power the engine will need) and the distance being travelled (and, therefore, the required runtime of the battery). This can vary massively: for example, urine samples are a considerably lighter payload than medical devices and drones that are transporting supplies from the mainland to a remote island will most likely be travelling a further distance than a drone that is taking samples from one hospital building to another.

There can be no doubt that drones are improving the accessibility of healthcare, whilst also helping with current supply chain issues. Although drones are still being trialled, they are predicted to be one of the next big innovations in the healthcare field. Due to Ultralife’s history in providing customisable batteries for the healthcare industry, its expertise can help to provide drones with the batteries they need. To find out more information visit https://ultralifecorporation.com/ecommerce/ or phone +1 (315) 332-7100.