The industrial robot market is embarking on a new phase of development. Robot vendors are widening the scope of their offer, targeting new application scenarios by offering machines of increased versatility. Trends include robots with both ever bigger and ever smaller payloads. Over the next few years, the traditional articulated robot with its mature presence in such major industries as automotive will continue to command the lion’s share of the market. But growth industries such as food and beverage and pharmaceuticals will mean strong expansion for other robot types.

In 2021 articulated robots accounted for over 75% of the total market value for industrial robots, which was estimated to be over $11.8 billion. Articulated robots dominate the market because of the many industries they serve, and their wide range of applications, such as arc welding, spot welding, painting  and material handling. They also offer a wide range of payload options. Most leading articulated robot vendors have a strong focus on the automotive industry, but other key sectors include metals, electronics, pharmaceuticals and food and beverage. 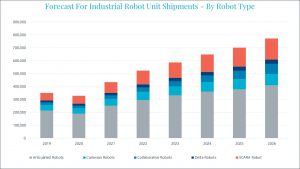 Collaborative robots are a relatively recent arrival on the scene and their potential is only just beginning to be recognised. Whilst they have a broad range of applications, besides cutting into industrial settings where more traditional robotics is already mature, new fields and applications are more opening up for cobot solutions, particularly in the areas of pharmaceuticals, food and beverage, and new energy, and we estimate that the market for cobots will grow at a faster than average pace. The signs are already there: after the downturn in 2020, the global collaborative robot market rebounded strongly in 2021, when sales accounted for 6.2% of the overall industrial robot market, the share had a year-on-year increase of 0.4%.

By 2026, we estimate cobot sales will exceed 10% of total industrial robot sales. In EMEA, revenues for collaborative robots are forecast to grow the fastest (with a CAGR of 21.1%) and cobots will account for over 14% of shipments in 2026, a significant increase on the 8.1% share in 2021. Small models (<10kg) will still lead the market, while we see an obvious trend in large payload cobot (>10kg).

Very light payload desktop models will also make inroads into the market. Two key drivers of the collaborative robot market are their relatively lower cost as compared to that of other robot types and their versatility of use, an important factor for manufacturers demanding flexibility in the face of the need for short and frequently changing product runs and customization. Many cobot vendors are targeting SMEs that are considering automating their production lines but feel they cannot justify or afford investment in large-scale robotics solutions.

The market for SCARA robots is also set to grow at a faster than average pace. SCARA robots have a broader range of applications, involving high-speed and high-accuracy pick-and-place and assembly functions. They’re generally used in smaller-scale scenarios in areas such as food-processing, chemical, and most important – electronics. As with collaborative robots, small models of <10 kg will be the main force for growth. The market for cartesian robots, which are used for such functions as pick and place, material handling, and loading and unloading, is expected to remain relatively stable; and the market for delta robots, popular in the beverage and pharmaceutical sectors, is also expected to enjoy stable growth over the next 5 years, as these end-user industries are predicted to perform strongly.