Recently there's been a clammer for (and against) a universal open-source robotic operating system. The proponents main argument is that such a system is beneficial particularly for rapid prototyping in the development of new systems while almost all of the industrial robot manufacturers argue that their robots are performing mission critical tasks which require secure and fail-safe operating systems - which they have developed and optimized over the past 50 years. 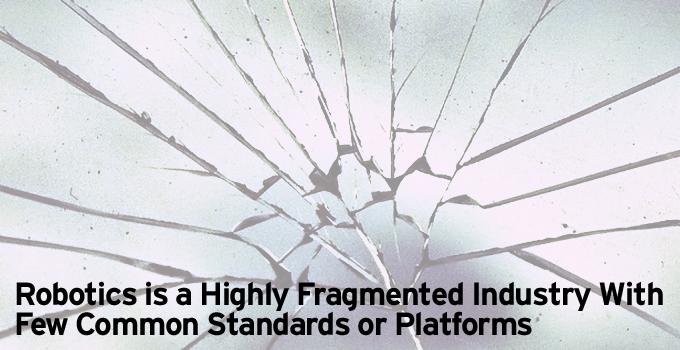 "Imagine being present at the birth of a new industry. It is an industry based on groundbreaking new technologies, wherein a handful of well-established corporations sell highly specialized devices for business use, and a fast-growing number of start-up companies produce innovative toys, gadgets for hobbyists and other interesting niche products. But it is also a highly fragmented industry with few common standards or platforms. Projects are complex, progress is slow, and practical applications are relatively rare. In fact, for all the excitement and promise, no one can say with any certainty when -- or even if -- this industry will achieve critical mass. If it does, though, it may well change the world."

Bill Gates clearly defined what I see to be prevalent in robotics today -- that there really are two different worlds operating, often together, more often not:
As Mr. Gates said, robotics is a highly fragmented industry with few common standards or platforms even though there are well-financed pushes toward standard connectors, open-source software, modularity and shared libraries. Recently there's been a clammer for (and against) a universal open-source robotic operating system. The proponents main argument is that such a system is beneficial particularly for rapid prototyping in the development of new systems while almost all of the industrial robot manufacturers argue that their robots are performing mission critical tasks which require secure and fail-safe operating systems - which they have developed and optimized over the past 50 years.
The diversity of the arguments are, to some extent, merited based on the unique needs of the various end users:

Industrial robot control systems are complex in part because of the need to integrate the robot into the end user's manufacturing system, partly because of the many algorithms which need to be processed to make the robot and all of its moving parts work, and because, up until recently, it was necessary to distribute the computing workload of the various activities of the robot, but also because control systems haven't kept up with the availability of faster and more capable CPUs, connectors and communication methods. All of these are reasons leading to robot manufacturers becoming more OEM-like as most of them aren't too capable in developing engineering solutions for new applications (thus their dependence on system integrators).

Service robotics, on the other hand, are more mobile and self-contained, carrying with them (or communicating via wifi) their control system functions. They tend to be either mobile or portable and either loosely connected to the end-user's internal system or operate either autonomously or by modified remote control. Consequently, software like ROS brings lots of new capabilities which the original robot manufacturers are not able to do. Service robotic providers and research labs and facilities see the value and enjoy the benefits of shared open source development - they see it as good and useful for the overall robotics community -- yet most of the start-up companies lock down their finished products so that end users are assured that their products are safe, secure and reliable and the resulting software is reduced to enable the product to fully function but not be overloaded with unused functionality.
Adding to this fragmentation and complexity are a few macro-level near-term trends:

It is into this fray -- this two-world ascendant industry of promise, fragmentation and complexity - that the question of whether a universal robotic control system is needed or not has been asked and not clearly answered.

There appears to be an obvious and logical answer: