Tell us what apps you want.

In July of 2008, the app store concept was launched by Apple and it has dramatically changed the mobile industry. Over 1.2 billion apps were downloaded between Christmas and New Year according to Flurry Analytics. That's about 60 percent higher than every week of December before Christmas, and marks the largest number of apps ever downloaded in a single week.

Robot app stores are now beginning to happen as well and visions of apps for tele-robotic safety and surveillance pop into mind, or light domestic duties, or…? My imagination runs wild at the thought and I imagine these new apps being easy to use, having multiple functions and a low cost.

But that is then and now is now. At present there are three significantly different approaches to an app store for robots (although additional “stores” are in the planning stage and many existing stores are making arrangements to expand beyond their own boundaries (like iRobot’s online store and Willow Garage's application chooser)):


Service robotics – as differentiated from industrial or defense/security/space robotics - needs to provide inexpensive and efficient assistance to humans to be profitable in the consumer marketplace and emerge as a serious industry. We already have vacuum robots and adaptive cruise control bots, but there are thousands of other possible applications. Entertainment, embedded systems, eldercare and home assistance are certain to be amongst the first groups to benefit as the service robotics industry materializes.

There are two different approaches to providing those services:

Certainly #2 has more near-term promise and is where most of the market is focused for the rest of this decade. As service robots begin to meet the four core criteria of low cost, low intrusiveness, safety and modularity – which is happening almost daily with technology changes – an incredible number of opportunities for service robot apps can be foreseen. The key will be to make them practical, affordable and acceptable by humans as part of their day-to-day life.

At discussions with Elad Inbar, CEO of Robots App Store, I asked about the size of the marketplace and was surprised to find that there are 14 million service robots out there now, and it’s estimatited that by the end of 2014 there will be 24 million. If only 15% of them were able to buy two apps at an average price of $9.99, that’s $72 million in revenue. If they each bought five apps instead of two, the figure would be $180 million. If 20% purchased five apps it would be a $¼ billion business. How real and applicable those figures are depends on many complex variables: willingness of the buyer to tinker, quality of the apps, flexibility of the robots, price, disposable income, etc. In fact, apps for robots with an Apple or Android front end will not be available in the Robots App Store but will onlybe available through the Apple (or Android) App Store – which limits the market metrics… an example of this Apple exclusivity is the hundreds of thousands of Parrot’s AR.Drone quadcopters.

Regardless of the metrics, the process of developing and sharing apps can provide a giant leap toward rejuvenating the robots we have and teaching the audience (the buyers) that they can get what they want from their robot(s). Thus the buyer becomes more educated and demanding and the producers less capricious -- and more profitable.

Inbar’s Robots App Store is “focused solely on the personal and service robots marketplace because “industrial robots are very limited in their functionality… not to mention that they are oriented to quickly repeat the same tasks 24/7 unlike personal and service robots that can be extended to virtually everything! I believe in the consumers market – as they will grow like a hockey-stick!”

When I asked what kind of apps we will see once the store opens, Elad said, “We have more than 100 approved robotic developers working on apps for Romba, Pleo, AIBO, NAO, DARwin and others arranged in categories like Entertainment (dances, etc.), Story Telling (for kids), Utilities (like home search engines), Tools (like face recognition and such) and many others.”

Finally, I asked about the mechanics of porting an app or game from one robot to another. “ROS by Willow Garage, Gostai, URBI and others are trying to build a standard open platform OS that will run across all robots. We, as a marketplace, don’t take sides in this battle. We are serving every robot, ever developer, and every OS. But surely we’ll have to take sides one day when the critical mass will decide which is the widely spread and used OS…. Personally I believe that ROS is in the best position to become the de-facto standard and I personally love to work with their code. It is easy, simple and their libraries can be ported quickly between different robots – a huge advantage for every robot apps developer.” 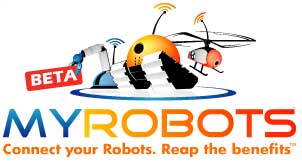 The goal for MyRobots is to get all robotic platforms to collaborate and operate together (regardless of their operating system) via the use of Cloud robotics. Although like other stores MyRobots will sell downloadable apps too, their main interest is to develop applications that will run on the Cloud thereby freeing computation time and resources on the robot and will make a single app compatible with many different robotic platforms.


Cloud Robotics is the application of the cloud computing concept to robots. This means using the Internet to augment the robots capabilities by off-loading computation and providing services on demand. Being connected to the cloud also helps robots to collaborate with other machines, smart objects and humans. Through this collaboration, robots transcend their physical limitations and become more useful and capable since they can delegate parts of their tasks to more suitable parties. By combining increased communication capabilities to the ability and flexibility of running and storing part of their intelligence (i.e. software, behaviors and apps) on the MyRobots infrastructure, smart objects and robots become augmented and constitute a new and revolutionary concept for the future of robotic intelligence: Cloud Robotics.

RoboEarth is an EU-funded consortium of educators, research facilities and corporations working together to provide a world-wide-web for robot applications. RoboEarth, in development for the last two years, can be seen as a giant network and database repository where robots share information and learn from each other about their behavior and environment thereby showing a better way of robot collaboration and information sharing. RoboEarth’s premise is to out-source application development by tapping creativity and experience from wherever they can. Further, they believe (as do I) that more apps sold equates to more robots sold. Quoting Markus Waibel:


The central beauty of the App Store idea is that it enables a feedback cycle: The more devices (phones/robots) you sell, the more lucrative the app store becomes for 3rd party developers to program new apps. And the more new apps, the more devices you sell. In my opinion, robotics does not yet have critical mass to jump start this at the present time.

RoboEarth is fast becoming a large shared repository for maps, object models, task descriptions, robot models, semantic relations, probabilistic relations and “action recipes” (apps) within the global academic community. It remains to be seen whether the big robot manufacturers will embrace the technology for their products.

One unintended consequence of RoboEarth’s efforts may be within the used robots marketplace. Imagine the financial gain if an older, unused robot is rejiggered to have new equipment as well as easy to train software to put the robot back to work on new projects. Another possible beneficiary is the end user who will be less likely to retain an intergrator/consulting service if the robot can handle ongoing changes on its own.

The ultimate goal of RoboEarth is to enable robots to share and store what they discover about the world on their own Internet.

As a personal aside, I live in a rural area outside of a medium-sized city. 4G LTE is planned for 2012-2013 for the city but not my area and I have to pay for a very unreliable T1 line to my office. It’s hard to imagine having a service robot doing its thing in my world while relying on the Cloud (as represented by my T1). Maybe the concept will grow on me with time but right now I’m wary and a bit afraid of the consequences.

But I also want to buy a used two-armed Yaskawa Motoman and put it to work in my workshop doing ad hoc tasks. I’d love to be able to add a hardware component add-on (or two), be able to use ROS or some simulation software to test my apps, buy some additional apps that do the kind of tasks I need to do in the shop, and have all that work seamlessly and without line-for-line coding, excessive cost or too much fiddling.

What do you want? Send them to me and I’ll combine them all and send them off to the stores.