Designed to be thrown up to 120 feet, the Throwbot could also move quietly throughout a structure and send back real-time video that revealed the layout of rooms, the location of barricaded subjects and the condition of hostages. 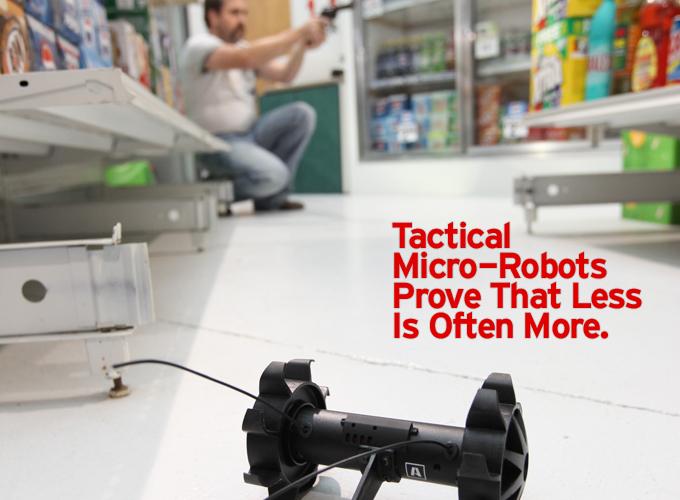 In 2007, Alan Bignall, president and CEO of ReconRobotics, introduced the 1.2-lb Recon Scout® Throwbot® to the law enforcement market. His theory was to let the bomb squads keep their 100-lb tracked robots, but give SWAT teams an entirely new type of reconnaissance robot that was sublimely small and simple. Designed to be thrown up to 120 feet, the Throwbot could also move quietly throughout a structure and send back real-time video that revealed the layout of rooms, the location of barricaded subjects and the condition of hostages. He believed that this information would save lives and help resolve many situations much more quickly. Over time, this new category of robots - the tactical micro-robot - transformed SWAT operations. Today, more than 300 police agencies and nearly all branches of federal law enforcement are using these robots. 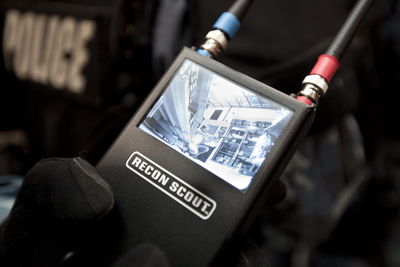 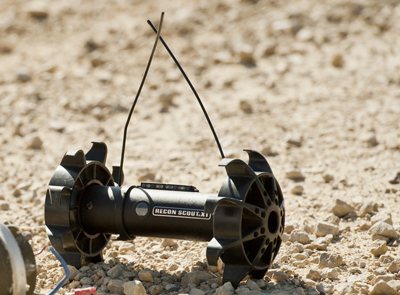 In recent years, the U.S. military and friendly forces abroad have also taken notice of this new capability. Their four- to five-man fire teams often operate in rugged urban centers and remote walled villages to investigate and clear structures that could contain any combination of IEDs, insurgents and innocent civilians. Like their SWAT counterparts back home, these soldiers are in the greatest danger when they are walking through a door or climbing over a wall into an unseen environment. Today, our warfighters use Recon Scout Throwbots to explore these environments before they enter them, and nearly 1,000 Throwbots have already been deployed in theatre. 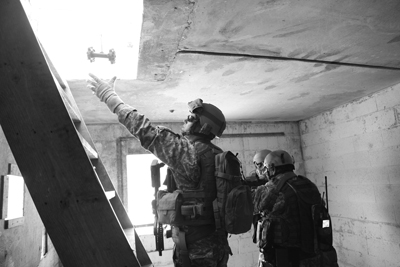 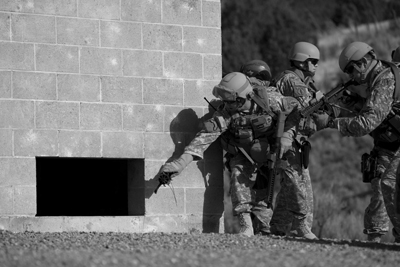 The following account demonstrates how law enforcement agencies use thowable, stealthy micro-robot technology to keep their operators safe and speed the resolution of high-risk tactical operations.

One of the fastest growing cities north of the U.S. border is Barrie in southern Ontario.  In the last five years, the city has added nearly 20,000 residents to reach a total population of 150,000. To meet the demands of its robust population growth, the city even annexed 2000 acres from a neighboring town in 2010.

Sergeant Rich Johnston has been with the Barrie Police Service since 1998 and his responsibilities have evolved in step with the growth of its Tactical Support Unit (TSU).  The TSU was established in 1999 as a base level or containment-level unit.  With additional training, it became a tactical level team and, in 2006, achieved status as a full-time team with hostage rescue capability.

Johnston started as a tactical operator, became a team leader in 2004 and was promoted to sergeant in 2009. He describes the TSU’s operational philosophy with this simple but eloquent phrase, “Own the real estate with your eyes before paying for it with your body.”

In addition to adhering to a doctrine of risk adversity, Johnston commends a Canadian willingness to invest in technologies that help the TSU operate more effectively and safely. “Police forces in Canada have no problem spending funds to reduce personal risk to law officers,” says Johnston.  These same principles led to Barrie PD’s acquisition of its Recon Scout XT in 2010.

In 2009, Johnston and his team were looking for a tactical robot when they saw the Recon Scout XT Throwbot at the National Tactical Officers Association show. They immediately focused on what made it unique. “It’s simple and it’s durable, but most of all, it’s functional,” he explains. “This salesperson from another company was trying to talk us into another robot – a larger tank-like thing with treads – and we were like, ‘But it’s not functional.  It’s so big and heavy. What are you going to use it for? You can’t even throw it.’ A tactical tool has to be useful. It has to meet the everyday needs of your team.”

Today, the members of the Barrie TSU - twelve operators, two sergeants and one staff sergeant – “are all very familiar with the Recon Scout XT,” says Johnston. They regularly train with the XT and, as Johnston recalls, within a week or two of having it, the TSU used the robot on a tactical operation.

“There was a known gang affiliate, a gang member, who had an extensive criminal record, which included violence and firearms,” says Johnston. “We had an arrest warrant, but we had no desire whatsoever to just go in.  We don’t do high-risk warrant service for that type of situation. Instead, we do what’s called a ‘Contain and Call Out’. So we set up on the house, and right away notice the electronic surveillance on the outside. We figure that he knows we’re out there, so we breached the door and called to him. We got no response, so we chucked in the Recon Scout and used it to canvas the entire main floor. Once we knew the main floor was clear, we approached the basement door. It was completely dark down there, so I just threw the robot down a long flight of stairs. The robot hits the bottom, and begins rolling right away. The IR activated and we thoroughly searched the entire basement level. Only then did we follow it up with personnel. As I said, ‘we put bodies into the real estate only after we had owned it with our eyes.’”

There are situations where the Recon Scout clears much but not all of a structure.  In such circumstances, Johnston says that the robot allows the TSU to focus its attention on the area that the robot is watching. Johnston describes one such call out in which a male with mental health issues was barricaded in a house.

“Our guys went out there and were able to get inside of his place, but they couldn’t find him,” says Johnston. “They wheeled the robot around the entire place, but they couldn’t get into one spot because it was obstructed. So, they left the camera focused on that area, and the team moved in. We located the subject right where the robot was looking. He was hiding in there with a knife.”

For a department like the Barrie Police Service, where team members operate in a risk adverse environment, “owning the real estate with their eyes before paying for it with their bodies” is paramount. The Recon Scout is indispensable. “It gives you the knowledge of what the layout is before you actually put your body in harms way,” says Johnston.