The small nanobots that are being deployed to fight cancer are nothing like what we imagine. Instead of being made of metal, plastic, and circuitry, cancer nanobots are created using "DNA origami," or "folding" DNA chains to form a barrel-shaped container for a payload of cancer antibodies. 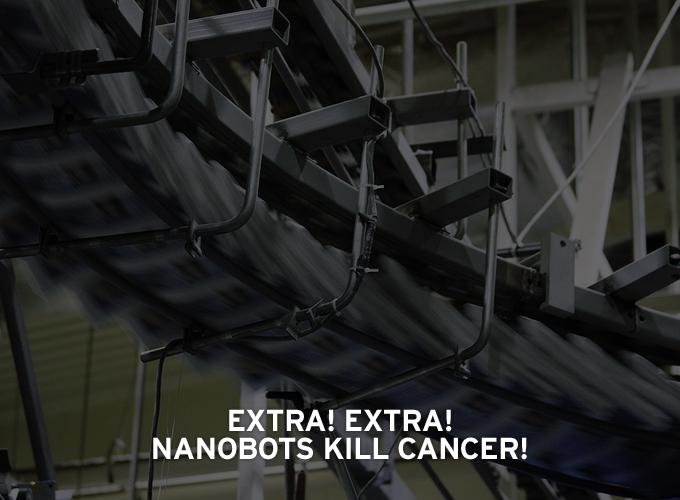 You may be seeing the end of cancer. The first trial on humans has been a success, with no side-effects:

Cells are the building blocks of living things.  Cancer grows out of normal cells in the body. Normal cells multiply when the body needs them, and die when the body doesn't need them. Cancer occurs when the growth of cells in the body is out of control and the cells divide too quickly.  Cancer can also occur when cells forget how to die. There are many different kinds of cancers, which can develop in almost any organ or tissue, such as the lung, colon, breast, skin, bones, or nerve tissue.  The cause of many cancers remains unknown.  One of the hallmarks of cancer cells is that certain regions of their DNA tend to get duplicated many times, while others are deleted. Often those genetic alterations help the cells become more malignant — making them better able to grow and spread throughout the body. 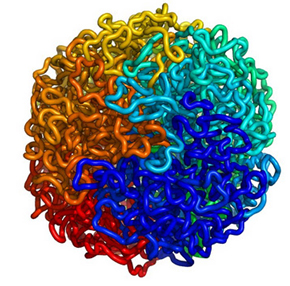 Researchers have found that the three-dimensional structure of the cell’s genetic material, or genome, plays a large role in determining which sections of DNA are most likely to be altered in cancerous cells.

Cancer treatment varies based on the type of cancer and its stage. The stage of a cancer refers to how much it has grown and whether the tumor has spread from its original location.  If the cancer is confined to one location and has not spread, the most common treatment approach is surgery. This is often the case with skin, as well as cancers of the lung, breast, and colon.  If the tumor has spread to local lymph nodes only, sometimes these can be removed.  If surgery cannot remove all of the cancer, the options for treatment include radiation and chemotherapy, or both. Some cancers require a combination of surgery, radiation, and chemotherapy.  Lymphoma, or cancer of the lymph glands, is rarely treated with surgery. Chemotherapy and radiation therapy are most often used to treat lymphoma.

While being an ordinary machine, a nanobot is incredibly small.  How about 1 billionth of a meter small, or in other words it takes 1 million nanometers to make up a millimeter. For those who are unfamiliar with the metric system, an inch is 25.4 millimeters, or 25.4 million nanometers. You are probably noticing by now that we are talking about a microscopic machine artificially made.

Electronic microscopy has captured images of the nanoparticles around and even within the cancer cells as seen below. 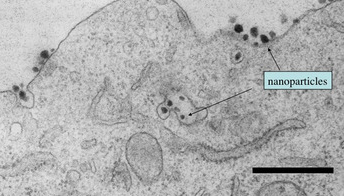 Look close. Those tiny black dots are nanobots delivering a lethal blow to a cancerous cell, effectively killing it.

The small nanobots that are being deployed to fight cancer are nothing like what we imagine.  Instead of being made of metal, plastic, and circuitry, cancer nanobots are created using "DNA origami," or "folding" DNA chains to form a barrel-shaped container for a payload of cancer antibodies. 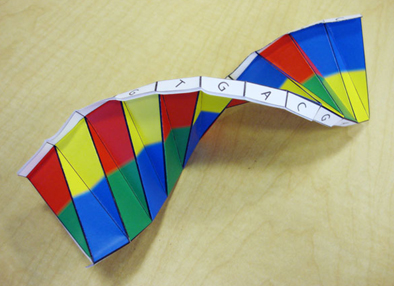 “DNA origami” might one day be used to create nanobots capable of finding and destroying cancer cells in the human body. The nanobots mimic a cell’s receptor system in order to communicate with cells. The cells can carry materials to cancer cells, and when the nanobot detects the cells it’s hunting for, it will spring into action.  These nanobots use molecule strands (aptamers) that are engineered to recognize cancer cells.  When the aptamers come into contact with cancer cells, they cause the nanobot's container to "unlock" and spill out the antibodies. 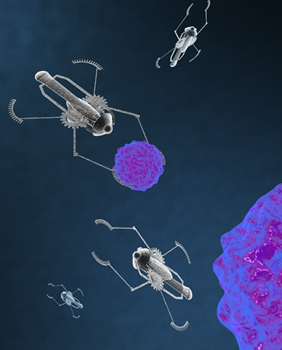 A nanobot measures only a few atoms across, which gives them the ability to interact at the bacteria and virus level.  Nanobots are so tiny that they could be easily injected into the bloodstream, where they would then float through your circulatory system in order to locate and fix problem areas of your body.  This has many great advantages over cancer treatments that are currently in practice; it is obviously much less traumatic to the human system than chemotherapy.

If surgery is used to treat a cancer and one molecule of cancer is missed, the tumor has the potential to return and the operation will be deemed a failure. Yet no matter how trained or skilled a surgeon may be, he or she is only human and cannot naturally detect cancer at the particle level. 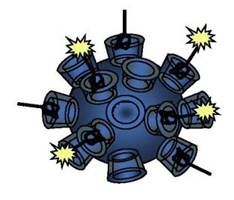 This is where the nanobot steps in. These microscopic robots could not only eliminate every cancer cell without touching non-target beneficial cells in the body, but they could do it in a very non-invasive, non-traumatic way. The day may be coming when cancer treatment will be nothing worse than a shot in the arm. As long as that syringe is full of cancer-killing nanobots, the patient will recover completely.

Interfering RNAs are a new type of therapy that attack cancers and other diseases at the genetic level.  Delivery has been a problem though, but now, researchers from the California Institute of Technology are able, for the first time, to successfully kill cancer cells in human patients using a new RNA interference (RNAi) therapy delivered via a special nanobot. 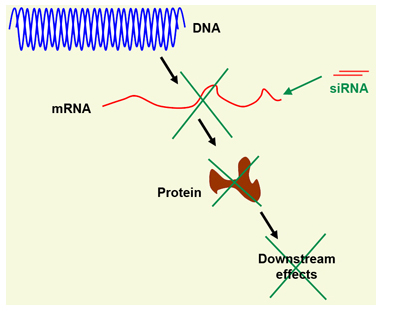 Imagine you could identify the role of a gene in a disease by switching it off easily, and in almost any organism. Then take this tool and treat certain diseases, such as cancer or AIDS, by switching off the causative genes. That's the promise that RNAi offers. 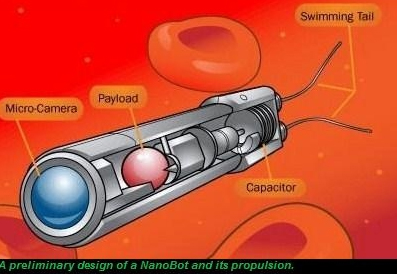 One way that is being worked on is to inject nanoprobes in the human body to search for cancerous cells in blood and tissue samples. The nanoprobes that are injected in the body have a coating of special molecules that bind themselves to specific reagents that are present in cancerous cells. When these nanoprobes bind themselves with cancerous cells they release a dye agent. This dye agent is a color scheme of red, white, blue, green, and yellow that provides the doctor with the information of the kind of cancer that is present in the human body and the treatment that should be used to cure it. Different cancer types react to different treatments. That is why it is necessary to inject diverse types of nanoprobes with different reagents to determine the type of cancer present in the human body. Once the nanoprobes determine the type of cancer, the doctors can then determine the best course of treatment appropriate for the patient.

Now that a delivery platform has been established, researchers need not stop at delivering agents that interfere with cell growth. They can also develop ways to repair the cellular damage caused by aging, or deliver a gene to rejuvenate the cell. Since the nanobot can deliver the cure for cancer in a cell, it can also enhance that cell using the same technology.