An electronic nose has a gas-sensor array sampling system and a signal processor coupled to a recognition system, where the sampling system moves vapor laden air into the sensor array. It could even work similar to a passive smoke detector. 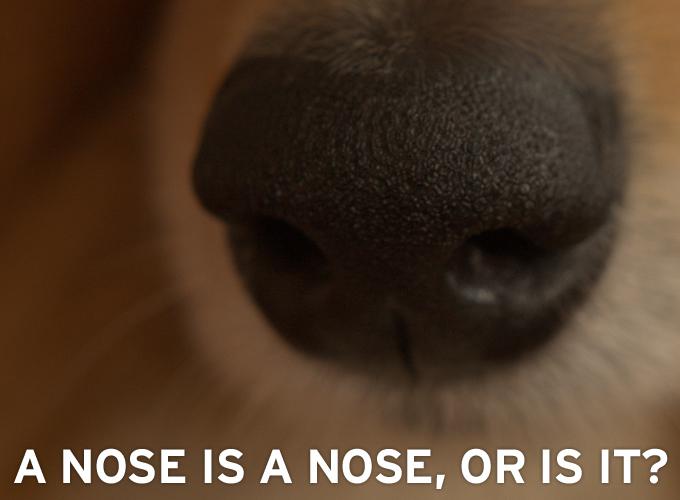 An Australian shepherd and a Labrador retriever were trained to smell test tubes that contained breath samples of 220 cancer patients. The dogs were trained to lie down in front of the vials and touch the vials with their nose if they smelled lung cancer. The dogs were accurate 71% of the time indentifying the vials with lung cancer and 93% of the time with the cancer-free vials. The dogs’ highly sensitive sense of smell can detect the difference between normal breath and the chemical difference of cancer even in borderline cases.

Dogs can be trained to sniff out different cancers and distinguish between different types and grades of cancer, such as ovarian. Even though the dogs could be trained to distinguish between ovarian cancer tissues and normal healthy abdominal tissue as well as gynecological tissue, the dogs could not be used in clinical practice as they could be influenced by other scents in their work, which would compromise their accuracy. However, these tests are actually leading to effective tools and methods for early cancer detection.

Dogs are capable of sniffing out diseases, such as cancer, by identifying molecules produced by the cancerous tumor in the patient’s breath. Since a dog can be influenced by possible false readings, scientists have emulated a dog’s olfactory system with an electronic nose that uses gold nanoparticles arranged on a silicon substrate to identify not only the presence of cancer but also the specific type. The sensors’ electrical conductivity changes when exposed to breath of cancer patient thus identifying the type of cancer detected. This method can detect early stages of lung, breast, prostate and colon cancers. 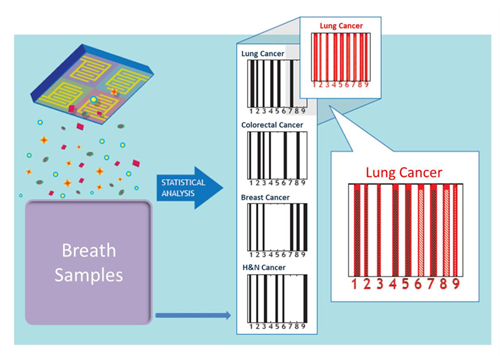 Conventional systems to detect cancer use blood samples, which are not very predictable; whereas an electronic nose can detect minute amounts of chemicals in the tumors, and identify the type of tumor. This inexpensive, uncomplicated device will help doctors diagnose cancer at an early stage, and hopefully save the lives of thousands of people around the world every year. The electronic nose would be a windfall not only to medical practitioners, but home users as well. Just think about a refrigerator that knows when the milk has gone bad.

Doctors will have electronic noses small and economical enough to carry in their pockets. Presently, electronic noses cost in the range of $5,000 to $100,000; but a coming convergence between eNose technology and advances in printed electronics will bring the price down to $10 - $20 by 2020, and they will appear in smart packaging for pharmaceuticals or as part of an intelligent  appliance. This will be accomplished by using printed organic polymers made with modified ink jet printers. 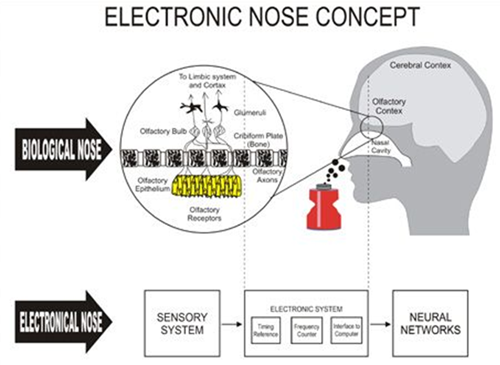 An electronic nose is a device intended to detect odors with the fragrance, food, beverage, packaging, pharmaceutical, and cosmetic industries presently using this technology.

We will never break down the odor of a soft drink into the many compounds that are in the making of a drink. But if you’re on a production line and you’re determining if the soft drink is good or bad, you won’t need to know what all the compounds are in order to tell you that a bad batch is different than a good batch. An electronic nose will analyze the changes between a good and bad soft drink; whereas humans would have difficulty smelling the good soda from the bad soda.

The human nose is an exceptional organ with millions of odor sensors, allowing the average adult the ability to detect some 10,000 dissimilar odors. Unless a person has a nose problem, they can tell the difference between fresh milk and milk that has soured; or enter a house and tell if a pie is baking or a turkey cooking.

An electronic nose uses similar recognition approaches to those used by the human olfactory system. The average person can detect by smell alone if a liquid is wine, but might not be able to detect the wine’s constituent parts. The smell response patterns are processed by the brain, which matches the odor to patterns stored in the brain.

An electronic nose only has about 10 – 50 sensing elements, but an eNose has a much wider dynamic range than the human nose; and it can detect chemicals in concentrations so small that people cannot smell them, or so large that they would overwhelm our noses. It can also detect chemicals that people find "odorless," and an eNose doesn't suffer from "odor fatigue," which is the human tendency to grow accustomed and insensitive to smells that start small and increase gradually.

An electronic nose has a gas-sensor array sampling system and a signal processor coupled to a recognition system, where the sampling system moves vapor laden air into the sensor array. It could even work similar to a passive smoke detector. 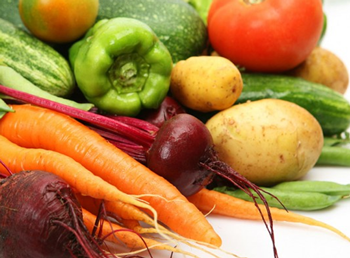 We throw out a large amount of food every day that is not even close to being bad, because the expiration dates are very conservative. Food waste could go away for good with the right electronic noses in place.

So where does this take us? As electronic noses are made more sensitive and cost affordable, we will be able to use them for the detection of dangerous bacteria. Software has been developed to recognize the smell of the deadly MRSA (methicilin-resistant staphylococcus Aureus), or MSSA (methicillin susceptible S. Aureus) staph bacteria. If placed in hospital ventilation systems, an electronic nose could detect many highly contagious pathogens and prevent patient contamination. 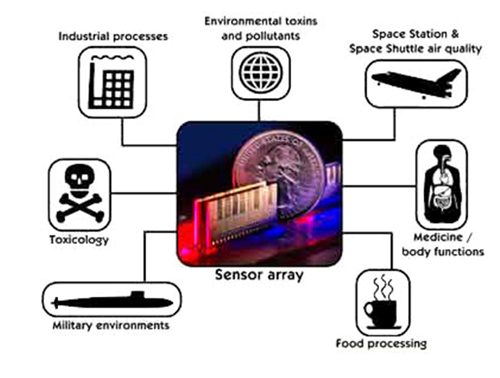 They will be able to detect volatile organic compounds that indicate medical conditions, such as cancer and diabetes, as well as warn of the presence of natural gas for people with a poor sense of smell; or they can be placed in food packing to indicate when food was spoiling.

An electronic nose will be able to give early warning of developing fires, especially electrical fires, by detecting the chemicals a fire emits during the earliest stages, long before they would be noticed by a common household smoke alarm.

In law enforcement, police departments and the DEA will be able to detect drug odors in areas where other smells would confuse police dogs. Using multiple electronic noses and a specialized computer system, an explosive ordnance disposal team (EOD) could triangulate the location of a bomb in a few seconds, and emergency responders could wear special clothing that can detect dangerous chemicals or toxic substances, such as found in fires and meth labs.

What’s next, a nose implant with an eNose for those of us who can’t smell? 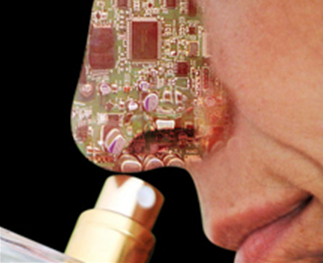