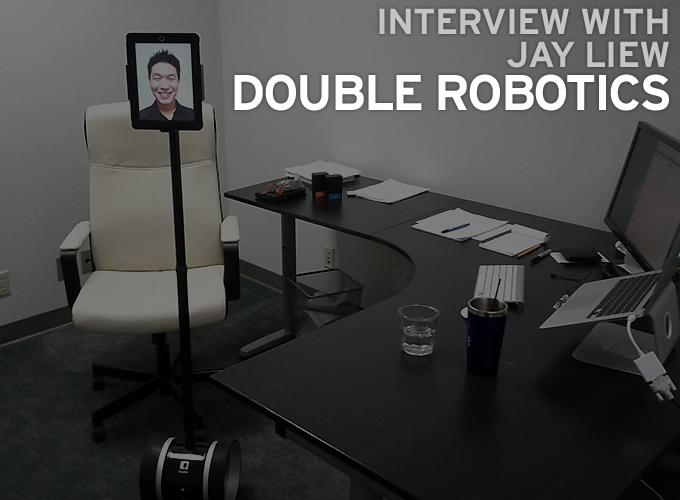 Tell us a little bit about Double Robotics.

The founders met on the TV show BattleBots which aired about 10 years ago. After the show, they started a company that built a robotic toy for children that could be controlled from an iPhone wirelessly. During the course of building the toy, they often wondered what was really going on at the manufacturing floor of their faraway suppliers that they relied on for internal components. This was around the time that the new iPad was launched with a camera, and they flirted with the idea of building a telepresence robot that used the iPad so that they could virtually "walk" around the manufacturing floor and see what's really happening on the ground. The rest is history.

Your first product release is the Double, what is Double and what can it do?

This goes beyond a camera at a fixed location. In a typical Skype call, if your grandma said "Come see what I'm making", she'd have to physically carry the laptop (or web cam) to the kitchen and point the camera at the pot. And she can't stir the pot while she's holding the laptop. With the Double, you can "walk" to the kitchen yourself and look at what she's cooking, while she cooks with both hands--all while still carrying the conversation with you.

Isn't that how it would be if you were physically there? There's something inherent about being able to independently move around that makes people feel closer to each other. We're still figuring out what it is. I think it's because using the Double mirrors an in-person real-life conversation more.

How is the Double different & unique?

Design, accessibility, and a little non-obvious fact about its self-balancing attribute.

We've had high-end retail shops wanting to use the Double to help shoppers. In the retailer's own words, "Frankly, your robot doesn't look like a robot. It's doesn't look clunky and heavy like it belongs in a factory." Design is also important because we've had customers who buy this to keep an eye on their aging parents tell us they don't want their grandparents to be intimidated by a robot, especially when it will be around them for a long time at home. 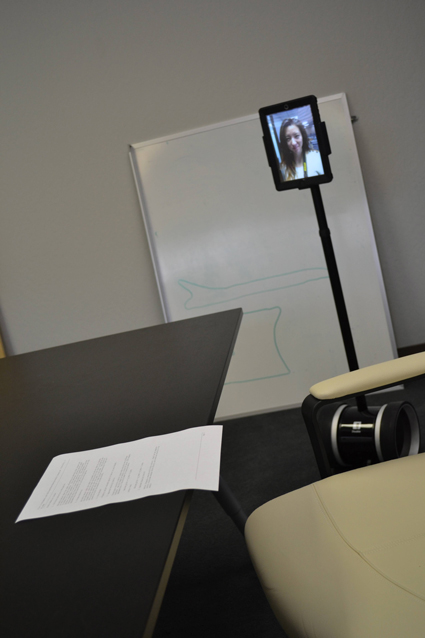 A small interesting fact about the Double's self-balancing attribute:

To comfortably speak to someone at eye-level, a telepresence robot must be able to adjust its height, whether the person it is speaking to is sitting down or standing up. The taller the robot, the higher the center of gravity, and thus the wider and/or heavier the base must be for the robot to remain stable. But a wide + heavy base means the robot can't maneuver around tight corners, and isn't convenient to carry by hand. Imagine the damage a 100 lbs. robot can do if it crashed into things!

The solution is a self-balancing robot, which solves all the problems above. The Double is safe, light, easily maneuverable, and can adjust its height to the person it's speaking to. You can even nudge the robot with a push, and it will catch itself from falling over.

The final crucial point is accessibility. Million-dollar telepresence robots have been around for a long time, but isn't realistically accessible to the average consumer for use in their homes. If airplanes were only accessible to those who can afford to own airplanes, very few people can fly. For a normal person, a $20,000 robot is just as accessible to us as a $1Mil robot. When you drive the price down to that of a laptop, or say, a flight for 2 from the US to Singapore, interesting things happen--the Double becomes as accessible as a laptop. As per Moore's law, from this day onward, the Double will only get better. Exciting times ahead.

The bulk of our customers are using it for the somewhat obvious use-case: meetings in an office setting, to improve team culture/cohesion with remote-colleagues, from large Fortune 100 companies to 1-man businesses. We've also seen uses cases from our customers ranging from wanting to keep an eye on aging relatives at home & education. What's exciting is when our customers tell us something non-obvious we haven't thought of.

Did you know that there are companies that make clinical-grade DNA for sale? These are usually bought by companies who need them for research. We have this customer, a DNA-producing company who currently mails out a pre-configured iPad to their prospective clients, so that the prospect can then wait for a FaceTime call. The DNA producer then calls the prospective client and give them a tour of their DNA facility--with a scientist holding the iPad while walking around, for a whole hour. With a Double inside the DNA producer's facility, the client can just "walk" around alongside the scientist (whose arms are secretly thanking us!) Clearly a way to impress the client too.

Another somewhat non-obvious example from a customer of ours is a company that makes commercial underwater pumps. When a pump breaks down, the customer ships the pump to the manufacturer, who then takes the pump apart to find the problem. Turns out, the initial "teardown" of the pump is a step where they often invite their customers to witness in-person, because one can usually tell if the problem is because of a manufacturing defect, or if it was a problem related to the customer's environment (or improper usage). The reason why this is significant is because the cost of repair will belong to the party who is at fault. With the Double, a busy customer does not need to fly in for witnessing this process. They can just "call in" on a double ;)

The exciting thing about making the Double accessible, is hearing about all the possible real-world uses that people think up that we would have never thought of by just sitting around brainstorming in a vacuum.

The introduction of Double created a large social media buzz for Double Robotics and the Double.  I understand the first manufacturing run is sold out.  When will they be available to ship again and will the 2nd manufacturing run have any upgrades?

We're still taking pre-orders, and have been since the day we launched--for a good bargain ($500 off!) The 6 of us are here on nights and weekends, making sure the machines continue working 24/7. Estimating an exact ship date at this point in time is extremely difficult for us because we're going to gradually scale up our production processes (i.e. it's not a linear increase in output), plus it's hard to predict when we'd gain the clearance required by countries outside the US (for international orders). Any orders that come in today will have their Double shipped after we fulfill the 800+ pre-orders ;) It's a classic FIFO queue (first-in, first-out). The $500 discount is a token of gratitude for customers who believe in us this early in our life. Once we start scaling up our production (real soon!), the $500 discount will expire.

Thanks for asking about upgrades. We consider both hardware + software as our core competency because we seek to marry the best of both worlds. We will have software upgrades, which can be easily transmitted over the internet. We'll also have hardware "upgrades", not just in the form of an incremental evolution of the product itself over time (version 2, 3, etc.) but in the form of hardware accessories you can snap on to the Double (e.g. a magnetic wide-angle lens you can snap on to the iPad holder for more periphery vision). That's one of the reasons why we're a little slow in producing these right now. We're trying to make the 1st version of the Double as "future-proof" as possible for the add-ons we're currently prototyping.

We also plan on releasing an API in the near future, so that people can also build apps.

As an example, we just announced a new hardware add-on at Le Web a few weeks ago:

What are future plans for the Double?  Will it work with other Tablets or devices?

We're not oblivious to the growing tablet market and all the major players ;) There will be changes, but there's one thing that will remain a constant: we'll continue to explore the market to see how people are using it, and how we might be able to better evolve the Double's hardware + software to fit their uses. We have 3D printers; lathes; and CNC machines in-house that give us the ability to think of any object, design it on the computer, and then bring the physical object to life--all within 24 hours. That's how quickly we iterate. And I'd love to know all your ideas! Email jay@doublerobotics.com

How can you envision this technology you developed being used in other ways?

To answer that question, it’s helpful to ask: what have we really created here?
I think we've given people the ability to teleport. Yes, just like in science-fiction movies; except people aren't teleporting their physical bodies, but their ability to see, hear, and walk around. In essence, they're teleporting their soul.

What could you do if you could be in two places at once?

Looking to the future, where do you see Double Robotics 5 years down the road?

The baby boomers created a massive demand as they progressed throughout their lives, from the millions of baby strollers in the late 40's when they were born, to the need for housing as they got married and had children in the 70's-80's (which drove up housing prices dramatically, but at the same time generated calls for "affordable" housing because the job economy wasn't ready for them).

The next 5-10 years will likely see the start of the dwindling in this cohort's productivity as they retire, and the increase of their consumption for health care and all things needed as their continue their journey (people are living longer now!) -- whose impact will be felt by broad swathes of the economy.

It is my hope that by making the ability to "teleport" accessible to as many individuals as possible (not just big companies who can afford it), as a whole, we can:

Jay Liew leads Double Robotics's Customer Development initiative, where he obsesses about "hacking growth" & getting to product/market-fit. Prior to joining Double Robotics, Jay held product management + software engineering positions at venture-backed Silicon Valley startups, including cofounding 2. Previous to that, he was a software engineer at Websense, a publicly-traded technology company.

Jay received a Bachelor of Science in Computer Science with a minor in Mathematics from the University of Louisiana-Monroe.