CES Asia: Innovation at the Speed of 5G

Homecare robots are already the primary driver of revenue for the wider consumer robotics market. This trend is expected to increase, following a banner year of revenue and shipment growth from floor care market leader iRobot.

Red Herring: ELLIQ comprises a tablet screen and a small, bobble-headed assistant, which looks like two bell jars glommed together, that interacts with elderly users, the device and humans on the other end of communication.

Cadie Thompson for Business Insider:  Downloading apps on your own personal robot may become as common as downloading apps on your smartphone. Robot makers Jibo and Blue Frog Robotics are creating social robots that are aimed at living with humans and in order to entice consumers they are selling them for about the same cost as an iPhone. Jibo’s robot called Jibo is priced at about $749 for pre-order and Blue Frog Robotics’ robot called Buddy is priced at $549. But these companies are also promising consumers that these little live-in robots are going to become the biggest platform since Apple’s iPhone, capable of performing all kinds of functions via apps. “It’s like the iPhone, if we want to reach the mainstream and have success we need many very interesting apps,” said Frack de Visme, the chief financial officer of Blue Frog Robotics. “We are going to have an open system so many developers can develop and create amazing apps so that it become mainstream.”   Cont'd...

Emotional 'Pepper' robots sell out in one minute in Japan 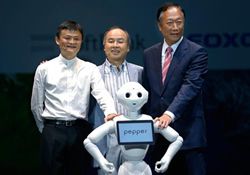 The initial batch of Pepper robots developed by Japanese mobile carrier SoftBank Corp and manufactured by Taiwan's Foxconn Technology Group sold out in one minute on the first day it went on sale in Japan. The 1,000 Pepper robots available for purchase in June sold out in 60 seconds when online orders started at 10 am on Saturday, according to a statement from SoftBank Robotics Corp, a robotics venture formed by SoftBank, Foxconn and Chinese e-commerce leader Alibaba Group. Orders are no longer being taken and additional sales of Pepper, which sells for 198,000 yen (US$1,625), are scheduled to be announced on SoftBank's website in July. In addition to Pepper's emotion recognition functions, the robot generates emotions autonomously by processing information from its cameras, touch sensors, accelerometer and other sensors within its "endocrine-type multi-layer neural network," SoftBank said.

3D Printing in the Dental Industry A Conversation with Henri Seydoux, CEO of Parrot

The success of the AR.Drone and now the AR.Drone 2 has proven Henri's conviction that there is a large consumer market for this type of entertainment product and that there are other related high-potential markets on the horizon. We can produce pneumatic hose and other pneumatic products to match your exact specifications. Our proficient engineering and quality management, coupled with outstanding customer service means Polyconn delivers high quality pneumatic components at competitive prices. Place your order or contact Polyconn for more information on our pneumatic hoses, pneumatic manifolds, Duratec® Pipe or any of our other top quality pneumatic products and components.
More Industrial Automation, Robots and Unmanned Vehicles Products | Feature Your Product