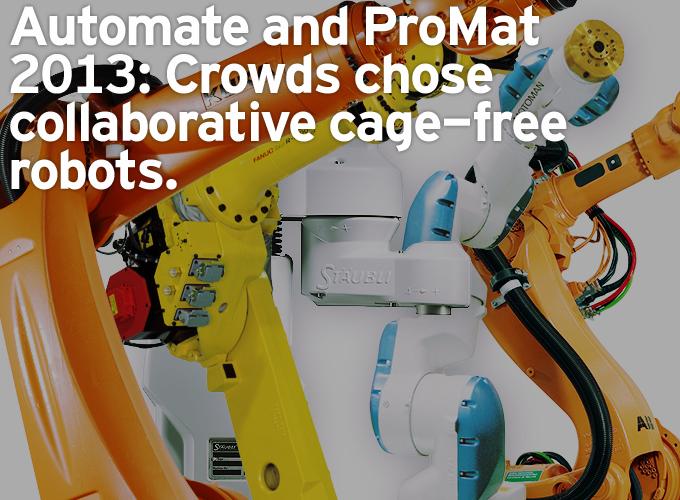 There are fewer manufacturers of industrial robots than one might imagine: only a little more than 200 worldwide. Of these, less than 15 account for more than 60% of the industry's revenue. Thus, at Automate 2013, held in freezing-cold Chicago, KUKA, Fanuc, Staubli, Motoman and ABB all had huge display areas showing their uniquely-colored robots (Kuka = orange; Fanuc = bright yellow; Staubli = white and light yellow; Motoman = blue and white; and ABB = red). These industrial arms are able to carry big loads as was demonstrated by this showy barbell-pressing Fanuc robot transporting two very heavy train wheels and their axle from place to place. 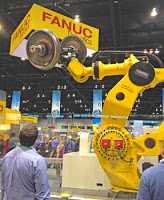 In addition to displaying robots in their own booths, colorful robot arms could be seen in many other much smaller cubicles. Integrators, gripper makers, end-of-arm tool makers and vision system providers all showed their products and systems working on robot arms from one of the big robot arm makers, the largest of this group being Schunk and Leoni.

Note that all of the companies mentioned are either European or Asian; that's where the industry is located even though all these companies have marketing and support offices in the U.S.

Despite the powerful presence of the major robot manufacturers, this year's Automate seemed all about integrating vision capabilities into robotic tasks. Camera and vision integrator companies were showing the various applications enabled by such visual additions to robotic technology. These included tools for inspecting for errors; identifying surface defects and missing features; identifying the shape and position of objects; measuring components for sorting and classification purposes; and systems to quickly read and verify markings on parts and labels.

In many other booths, bin and conveyor picking was displayed. Some showed vision systems being integrated with robots and special grippers to look into a randomly organized containers or conveyors and pick out and grab a desired item in an efficient sequence. ABB's PickVision is an example. Their video of a food-handling process [click the image at the right to see the video] demonstrates the system locating, stacking and packing pancakes. During his keynote address to the combined Automate and ProMat audience, Henrik Christensen noted that bin-picking didn't exist 10 years ago and is now just one of many examples of how new cameras, lasers, sensors and software are augmenting robots to new heights and applications. The paradigm was the smoothly-running Industrial Perception (IPI) robot choosing and grabbing randomly stacked boxes from the back of a truck and placing them on a conveyor or pallet. The 3D software and advanced spatial recognition algorithms integral to making the IPI robot work are continuing this progression of new developments breeding new applications.

IPI's robot consists of their new tool designed to grab cases off a truck or shelf, their use of various vision and lighting systems to "see in 3D" [what's out there], and their proprietary software to determine dimensions and exact locations. It then decides which is the safest and most expeditious package to pick, and, using an industrial arm grabs and then swivels around to place the box or package on a pallet or conveyor. It all works quickly and smoothly and seems logical and conceptually easy. But IPI has made a significant breakthrough in putting it all together and making it work seamlessly. To see the device at work unloading random sized cases off of a truck - (as can be seen in the video above from an IEEE/Spectrum posting - is an ingenious achievement yet simple combination of vision, data analysis, a creative gripper and an industrial strength robot arm.

Both companies offer new methods of training their robots: Baxter is taught via a graphical interface and direct manipulation of its arms; Universal offers a hybrid of the clunky industry-standard teaching pendant and a simple teaching-style point and click programming environment.

Comparing features beyond training is a bit difficult because Universal sells their robots as a single-arm device; their two-armed version, although similar to Baxter in appearance, is just a trade show demo. In defense of a single arm low-cost robot, one German research institute found that 86% of tasks expected of a healthcare/service robot could be accomplished with a single arm and a flat surface.

Transitioning from Industrial to Service Robots:

In fact, Universal Robots' two robots, UR5 and UR10 (5 kg and 10 kg respectively), are more comparable to the new and more expensive lightweight one-arm offerings from KUKA, Yaskawa Motoman and others that are making these new single- and dual-arm robots safe to work un-caged and alongside human workers. Rethink Robotics' Baxter is in a category all its own for the present because of price and capability. There is no cheaper two-armed robot and there is nothing with the capabilities and flexibility that Baxter offers (particularly down the road as they improve it). But competition is coming from creditable players - perhaps as soon as Automate 2014.

The major robot makers appear to be slow in transitioning into this next generation marketplace, perhaps because they are just barely keeping up with the current one which is expanding in double digits all over the world. This may be one explanation for Universal Robots low-cost-of-entry robot having so much success. Or perhaps because they aren't ready to move into the lower-priced arena just yet. Major robot makers are transitioning from single task to multiple tasks, from single arm to dual arms, in large factories and auto plants. The next round of advances, whenever it happens, appears to be the merging of safety, mobility, vision, flexibility and dexterity that enable new collaborative cage-free robots to assist humans in various short-run tasks including assembly, transport, tending other machines, etc.

I noted a growing use of ROS and ROS-Industrial for the development and integration of add-on systems and equipment to existing robots. Southwest Research Institute (SwRI) showed their ROS-Industrial software and libraries and how its use is growing amongst robot manufacturers and integrators. Nearby, an integrator was showing three robots (a Fanuc, Kuka and ABB) all working together - collaborating - on a packaging line. In the example they were all sharing a single control box - a remarkable software achievement. And Gumstix, the $100 computer on a chip, announced support for ROS — and introduced a bootable microSD card with ROS preloaded. 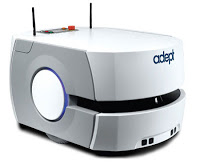 Another crowd pleaser was Adept and their new mobility platform, Lynx. Adept's line of robots were shown on the recent CBS News 60 Minutes segment about robots and jobs and included an interview with Adept's CEO John Dulchinos. Similar to the platform iRobot developed with InTouch Health, Adept's Lynx doesn't require floor or ceiling markings for it to safely guide itself from place to place. It uses natural feature navigation and is designed to work in existing, peopled environments such as warehouses, factories and offices. It has an innovative blue wheel on the side that communicates status and intent of the robot to surrounding people. Lynx can haul 130 pounds for up to 13 hours at up to 4 mph before needing a recharge. It can be programmed by voice prompts or through a tablet. 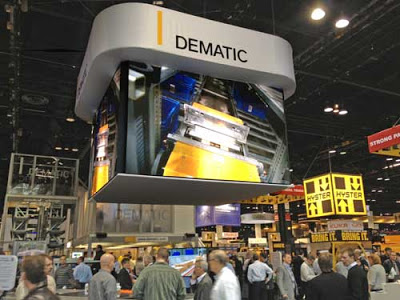 Across the hallway in the ProMat material handling show held in conjunction with Automate, the major vendors tended not to call their products robots; they referred to them as being automatic or autonomous material handling devices and systems. The booths for Dematic, Swisslog, Egemin, Raymond, Seegrid, Murata, Beumer, Elettric80 and Schaeferwere as prominent in ProMat as the big gun robot makers were at Automate. Dematic's booth in particular had overhead screens - like at a basketball arena -- as well as hundreds of feet of moving conveyers, elevators, bins and cases. Perhaps they needed to specially promote at ProMat in order to distinguish their products from Symbotic's very similar ones which debuted last year. Symbotic didn't exhibit at either Automate or ProMat.

It's All About Jobs and New Tech: 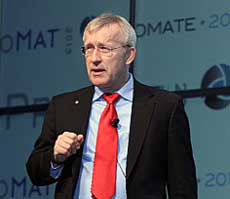 Henrik Christensen's keynote address discussed his efforts in the halls of Congress and at the White House to convince lawmakers that automation and job growth were not mutually exclusive. “It’s about how to leverage and empower the workforce, not remove it,” he said. “Once we bring manufacturing here, we also have more control over jobs in the associated supply chain.” He went on to attack the recent CBS News 60 Minute segment which showed many robotic advancements but also implied that robots take jobs, as being "a piece of crappy journalism."

In that same CBS 60-Minutes piece, one of the authors of a study about jobs and the future, said, “Even if offshore manufacturing returns to the U.S., most of the jobs will go to robots.” The International Federation of Robotics, in a press conference the day after Christensen's talk, revealed the contents of a new study it had commissioned. That report indicated a number of trends: (1) the economy always picks up much faster than job growth; (2) for every job created in manufacturing, there are 1.3 jobs created in other areas because of it; and (3) that investments in technology lead to unemployment in the short term, but a much higher job comeback just 3-5 years out.

Further, noting that bin-picking wasn't even possible a decade ago, Christensen suggested that within the next 10 years autonomous cars may be able to serve as driverless parcel carriers and that un-piloted drones may ship packages coast to coast.

He endorsed the concept currently being used by mobile robot company Aethon which provides a service to manually override their robots when the robot signals for help. Generalizing this service to others, Christensen suggested that robots could be serviced and directed by their manufacturer through the cloud as needed so that the customer wouldn't have to be involved with robot maintenance.

All in all the buzz of both shows was that (1) there were more buyers and strong leads than last year and (2) that investment in capital purchases for new robots and warehousing systems, which had been put off for years because of the recession, was now back on and companies were reflecting that with their orders and comments.