Propulsion is provided by the conversion of wave energy to thrust. When the float rides a wave, spring-loaded wings on the propulsion unit pivot, but not too much, to mechanically convert that up-and-down motion into horizontal motion. 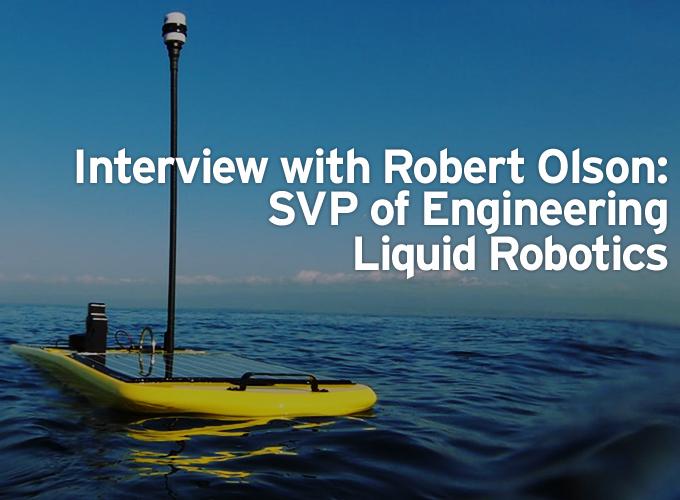 Tell us about WaveGlider and its mission. 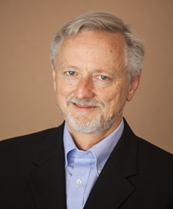 The Wave Glider is an Autonomous Surface Vehicle (ASV) designed for missions lasting months to years in the open ocean. Similar to some NASA missions, this imposes some tough engineering requirements:

Physically, the Wave Glider consists of a float and a glider, a propulsion unit connected by a flexible, 6 meter tether. The float contains a command and control computer, two solar panels, lithium ion rechargeable batteries, Iridium modem and GPS. All electrical power is provided by solar panels by way of the batteries. The float also has two customer-accessible payload bays.

Propulsion is provided by the conversion of wave energy to thrust. When the float rides a wave, spring-loaded wings on the propulsion unit pivot, but not too much, to mechanically convert that up-and-down motion into horizontal motion. An electric rudder provides steering, under the control of software. For more insight into the technology, visit www.liquidr.com/technology/wave-glider.html

The Wave Glider provides a variety of communications channels, including Iridium, WiFi, XBee, BGAN and cellular data. Software and applications are able to switch between these channels, and can even use several of them simultaneously.

Telemetry is sent to, and commands sent from, a shore-side system called the Wave Glider Management System (WGMS). Pilots control a fleet of Wave Gliders through a browser-based UI served by WGMS. That UI provides a map-based interface and allows pilots to program a route for the Wave Glider to follow. Once programmed, the Wave Glider will execute the route until overridden by later instructions. The details of navigation are managed on-board the Wave Glider.

It is also possible for on-board software to specify routes and other navigation commands. An example of this would be software which would identify a biochemical event of interest and autonomously change the Wave Glider's route to explore the event.

WGMS is hosted on a network of geographically distributed cloud computing systems. This gives us scalability and geographical redundancy.

How does the WaveGlider navigate and move over a long period of time?

The navigation plan is established by pilots in collaboration with our clients. Pre-mission planning includes researching local tides, currents and physical risks, such as water depth, the presence of reefs and the types and amounts of marine traffic in the area.

Armed with this information, pilots work with our clients to establish an optimal route, expressed as a sequence of waypoints.

That sequence is communicated to the Wave Glider's Command & Control and can be changed at any time by authorized individuals. Once a route is initiated, software on board the Wave Glider manages the details of following the route based on GPS and compass readings. The Wave Glider automatically notifies a pilot if for some reason it can't execute the route, but it will continue trying until given new instructions.

We recently piloted two Wave Gliders from San Francisco to Australia, approximately 9000 miles. This is part of our PacX Challenge,  a program designed to help ignite interest in marine science as well prove the ruggedness of the technology. We laid out an initial plan for the entire route, taking into account known current patterns and areas of interest along the way. Those routes were updated from time to time to reflect local conditions, such as the tropical cyclone we encountered near Vanuatu. As we approach the destination, we often rely on local knowledge to select the recovery location and send updated instructions via satellite.

What type of data is the WaveGlider able to collect?

One way to think about the Wave Glider is as a pickup truck capable of a wide variety of data collection missions. Or a floating data center that you can place sensors on the top, in the float, underneath or tow.  Our customers are very creative and constantly come up with new ideas we hadn't considered.

However, we have identified several "typical" missions and solutions.

How much background support is required to keep a WaveGlider on course to complete its mission?

The software on board the robot does most of the detailed work. Pilots monitor the health of the robots and track their progress against their objectives. They intervene in the event of problems, but most of their time is spent on mission planning.

What are the primary commercial applications for the WaveGlider and what are the ballpark costs involved?

We provide ocean data services across a wide variety of markets and applications.  Our target markets are Oil & Gas, Science and Research and Civilian/Defense/National Security. Commercially the Wave Glider has application for anyone who needs to collect, monitor and observe the oceans.  From oil and gas to weather monitoring to communication relays to fisheries and more, we provide affordable access to ocean data through our data-as-a-service.

I'm in engineering. The Sales guys don't let me talk about the pricing. Probably wise on their part.

*Ocean data services range from $1500 to $3500 / daily depending on mission requirements and sensor configurations. This provides 24x7 data collection at a fraction of the cost of traditional methods.

What other ways do you foresee this technology being used?

To me, one of the most exciting opportunities is the use of multiple Wave Gliders for spatial and temporal sampling of micro- and meso-scale structures in the ocean. Today most of the data from the ocean either comes from a single point source such as a ship or a 2-D image from space with giant pixels. The flaw is that processes in the ocean mostly operate on volumes in motion (4D) and the current sampling regimes miss much of the interesting behaviors. It is as if the National Weather Service forecast the weather based on a single weather station in each state.

In each of these examples, using a network of relatively inexpensive robots will illuminate dynamic processes with in situ data relayed in real time to scientists for their evaluation and changes of plans. I believe this type of data collection will allow the scientists to develop much better models of ocean processes, with potentially huge benefits for humans and the plants and animals we share the planet with.

Is Liquid Robotics involved in other product development projects that we will see in the near future?

Yes, we have a robust product and services roadmap.

The Liquid Robotics Engineering organization consists of four groups which you can roughly think of as concentric circles.

The innermost circle primarily consists of mechanical engineers. They focus on hydrodynamics, materials selection, reliability, manufacturability and, of course, the mechanical systems which translate wave motion to thrust.

The next circle is our Platform Engineering group. Their responsibility is to develop the electrical and software systems which allow the Wave Glider to navigate, communicate, and collect and distribute power.

The third circle is responsible for collecting and distributing sensor data for both pilots and scientists. They write the software which manages the instruments, stores and processes sensor data on board and on shore, provides user interfaces and manages the shore-side networks which host our software.

The outermost circle of systems engineers works with both Liquid Robotics engineers and customers and vendors to develop full solutions, such as the Fisheries Wave Glider and the Sentinel Wave Glider.

While most of our engineers have a core technical discipline, such as Ocean Engineering or Electrical Engineering, one of the fun aspects of working in robotics is that most useful solutions require the combined efforts of many disciplines. We all learn about our world from those interactions.

One of my favorite anecdotes is that in my very first meeting at Liquid Robotics, there was a spirited discussion about whether a particular part should be made from stainless steel or titanium. It wasn't an issue I had considered in any of my previous jobs, and was a foretaste of the education I was about to receive.